The Piranha Club, submitted by Fistgrrl. This site is run by Bud Grace, a half-crazed middle aged guy with more than a passing resemblance to an even geekier version of Eugene Levy. Bud writes and illustrates some shitty comic ("The Piranha Club") that is about as side-splittingly funny as two strips of "Rubes" stapled to three strips of "B.C." Okay, I'm overly harsh, it's far better than "B.C.", but it still sucks pretty bad. Unlike the author of "B.C." however, Bud has an unhealthy obsession with posting photos of surgeries being performed on himself on his web site, include a hernia operation and a hemorrhoidectomy. 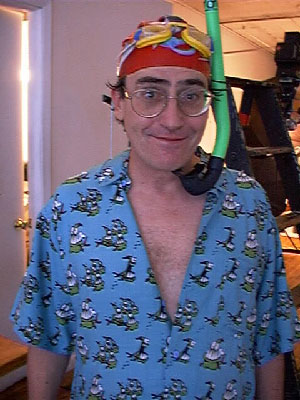 Hey, if you cxan stand my rugged good looks, here's a recent photo of ME. Notice I hold my pen upside down when I draw.

I simply cxannot stand his rugged good looks, they are giving me a serious case of the vapors. Come to think of it, Bud's weird medical fetish isn't really all that out of place amongst his peers in the comic strip industry. I seem to remember reading an article about the guy who illustrates "Marmaduke" being into vivisection and I know for a fact that Charles Shulz owned at least five vaginal speculums for his amateur gynecology practice. Oh well, live and learn. And with that, it's time for me to go jump off a cliff.