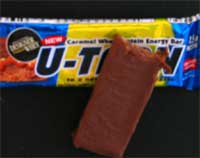 LABEL DESCRIPTION: First off, the U-TURN label is fresh and funky and in-your-face with nutritional attitude, as can be seen in the fact that the "U" in the word "TURN" is upside down and has an arrow coming from it. You see, a normal, non-extreme energy bar would settle for an ordinary "u" character, but oh no, not "U-TURN"! They've got an upside-down "u"! Can you feel the rush? There's a big circle which reads "America's #1 Protein DESIGNER PROTEIN WHEY" and I have absolutely no fucking clue what that means or if I'm supposed to be impressed. I'll go out on a limb here and claim that I am. The tagline for this energy bar is "U-TURN to a new state of taste" which infers that I was previously heading in the direction of an old state of taste, and let me tell you folks, that depresses me beyond belief. Thank you for allowing me to see the light, U-TURN.


NUTRITIONAL FACTS: This bar didn't have any section which listed all the vitamins it contains, so I'm going to assume that there are absolutely no vitamins in an average U-TURN energy bar. Let me take this statement to the next logical step and conclude that U-TURN is made from the remains of cremated elderly lovers.


REVIEW: Despite the fact that I have no goddamn clue what "whey" is, much less "designer protein whey," U-TURN didn't taste that terrible. It's pretty thin and covered in a fake chocolaty substance which resembles cake icing. Beneath the cake icing and caramel is some mystery chemical with the consistency of biting into a shoelace. I don't know what that is; maybe it's the designer protein whey in all its glory. I think the main reason this energy bar didn't taste like bland shit is because of the aforementioned lack of vitamins. If this is the taste of my dead grandfather, let me be the first to start praying for more of my family members to die! I just came up with that quote, so if you marketing folks at U-TURN Inc. would like to use that line to sell your energy bars, please be aware that you'll have to ship me large burlap bags full of cash first.

I would also like to note that it is near impossible to open the wrapper and you'll die from hunger before summoning up enough strength to tear it open. Of course if you ate a U-TURN energy bar before trying to open one, you would undoubtedly possess such superhuman energy, but that's venturing a little too far into "the chicken and the egg" scenario. I have no clue what that last sentence means.


REVIEW FROM DOG: This energy bar contained chocolate (or some type of fake chocolate) so I couldn't feed it to him because I was told that if you give a dog chocolate, then he begins foaming at the mouth and will throw up all his internal organs.


AMOUNT OF ENERGY I RECEIVED FROM CONSUMING THIS: A fair amount. My headache didn't go away from the Zone Perfect apple disaster fiasco, but I regained my will to live. 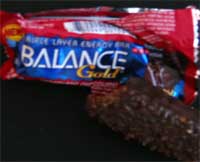 LABEL DESCRIPTION: Woah nellie, look at all them capital letters up there! This wrapper blew my mind with its fancy colors and reflective surfaces, displaying a seemingly random series of numbers all across it. For example, above the word "CRUNCH" (which has jagged lines across it to really stress the whole "crunch" aspect) the numbers "40," "30," and "30," are all printed inside bright pink circles. What do these three numbers mean? Are they the combination to the CEO's safe containing all his secrets behind the BALANCE Gold legacy? Are they lotto numbers? If you add them all together you get 100, which means that this energy bar is obviously good because hey, 100 is a fantastic number no matter how you look at it.


NUTRITIONAL FACTS: While BALANCE Gold has 20% of my daily required saturated fat intake, it also comes with 100% of my recommended vitamin C. Can I possibly ingest any more vitamin C today? Well I guess we'll "C" about that! Ha ha! I'm sorry, that was just a little nutritional joke! Thanks for playing along!


REVIEW FROM DOG: This energy bar contained chocolate (or some type of fake chocolate) so I couldn't feed it to him because I was told that if you give a dog chocolate, then his head will cave in like a deflating basketball and then John Ashcroft will come over and beat you to death with a garden hose.


AMOUNT OF ENERGY I RECEIVED FROM CONSUMING THIS: Enough energy to throw it the hell away.