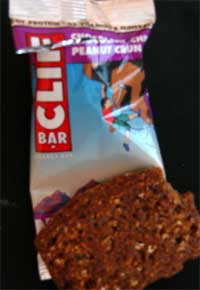 LABEL DESCRIPTION: Everything on the front is in all capital letters, so I can't really express how utterly blown out of the water I was when I first laid my eyes upon it. It was like looking directly at Jesus or perhaps a candy bar wrapper made by Jesus or at least containing letters which are also in the name "Jesus." In a stunning twist of marketing genius, the "CLIF" bar features a picture of some faceless guy climbing a cliff. Do you get it? It's called "CLIF" and there's a guy on a cliff! It works on so many levels... this is clearly the energy bar for you intellectuals out there who enjoy emo music and writing poetry about the ocean.

The back of the wrapper says "Clif Bar is named after my father, Clifford, my childhood hero and companion throughout the Sierra Nevada mountains" and then goes on for two paragraphs about "Gary's" dad. "Gary" is the founder of Clif Bar and apparently believes when we consumers buy energy bars, we really want to read a little mini-novel about his terribly exciting life and relatives. Hey "Gary," if I wanted to read about your retarded family, then I'd pull my dick out of your mom's mouth and ask her myself. Yes, that's right, I made a mom joke. I "went there."


NUTRITIONAL FACTS: This bar seems to have at least 20% of every vitamin and substance known to mankind. Every ingredient in this energy bar is "ALL ORGANIC, ALL NATURAL" which gives me this terrible sinking feeling in my gut. You know what else is all organic and all natural? Pelican shit.


REVIEW: Do you remember those plain orange and black candies that the neighborhood deadbeat cheapskate hands out every Halloween? They look like generic candies and come in either an anonymous orange or black wax wrapper, and no scientist on the Earth has been able to determine where these mysterious wads of chemicals originated from and who sells them. The CLIF BAR tasted like those things, only with a lot more crunch and the shape of a squirrel flattened by a tanker trailer. If this energy bar was some kind of stupid tribute to a dead guy, then I gotta tell you, that dead guy isn't really missing much by not being alive and able to eat this thing. Perhaps the drawing of the guy scaling the cliff on the front of this wrapper was "CLIF" shortly before he died, and this energy bar is composed from the rocks and gravel inside the cliff he fell from. Now that'd be a good story, although maybe not such a great marketing angle.


REVIEW FROM DOG: This energy bar contained chocolate (or some type of fake chocolate) so I couldn't feed it to him because I was told that if you give a dog chocolate, then he'll develop incredible psychic powers and use them for evil, not good.


AMOUNT OF ENERGY I RECEIVED FROM CONSUMING THIS: Not very much. Dead guys don't make good energy bars. 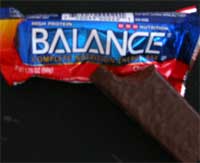 LABEL DESCRIPTION: This energy bar doesn't have much compared to its high-fallootin' brother, the "BALANCE Gold TRIPLE LAYER ENERGY BAR CHOCOLATE! CHOCOLATE! CRUNCH." For example, this bar is apparently not rated "gold" which means that, well, I don't know what it means, but I assume it's not good. "Gold" is always better than something non-gold because, hey, it's gold! Who doesn't like gold? The only thing better than gold is platinum, and they weren't offering any platinum energy bars at the supermarket, so I did the best I could under such circumstances. The enigmatic "40 - 30 - 30" combination of pink circles appears on the top of this bar as well, furthering my suspicion that it is a code for the Zionist conspiracy. The joke's on them though; I was wearing my tin helmet the entire time I tried eating this energy bar! Score one for the good guys! Go team! USA!


NUTRITIONAL FACTS: This bar contains 2% less saturated fat than the Gold version, although it lacks 100% of the "CRUNCH" because I swear I looked all over the wrapper and couldn't find a single instance of the word "CRUNCH" anywhere. I even read the tiny print next to the copyright. Once again, 100% of the recommended vitamin C is present in this bar, so if you're a pirate and are really concerned about scurvy, fuck the oranges and instead bring a crate of these bad boys on your next trip to find exotic spices and silks across the Orient. That would be another great marketing idea, some old pirate shrieking, "YAR, fuck the oranges and pick thee up one'a dese, landlubber!" The pirate could be a Hispanic female if you'd like to shift the marketing demographic. This energy bar has a spooky message that read "BEST BY: OCT 02 03," which worried me because I was literally one day away from eating an energy bar which would've gone bad! Oh no! The amount of vitamin C in the bar could drop to dangerous, sub-100% levels!


REVIEW: Awful, simply awful. It seems every BALANCE bar is coated with the fake obligatory cake mix icing on top and contains something horrible inside, like the time when I was a kid and gave my mom a Christmas present which was a dead bird encased inside the most expensive gift wrap I could find in the bathroom closet. The trick chocolate in this thing is so bad that I was actually physically scrunching up my face while trying to wash out the aftertaste with a glass of water. This thing is so unsweetened that it's actually a black hole vampire of sugar, draining the vital life force from any sweet candy which may surround it. I couldn't even bring myself to do my obligatory "third bite" test on it, where I attempt to eat a third sample of it to see if I'll die or not. I calculated the odds and determined that it wasn't worth the risk, thereby electing to place the horrid log of filth into the toilet where it belongs.


REVIEW FROM DOG: This energy bar contained chocolate (or some type of fake chocolate) so I couldn't feed it to him because I was told that if you give a dog chocolate, then you'll go to hell and there's nothing to do in hell except listen to German xylophone music.


AMOUNT OF ENERGY I RECEIVED FROM CONSUMING THIS: Not enough to make me forget that I ate two bites from it.

Stay tuned for the conclusion of the Nutritional Candy Bar Challenge which will take place next Tuesday, unless of course nobody bothers emailing me about today's update and, as a result, I cannot find any motivation to finish the article and write a second part.