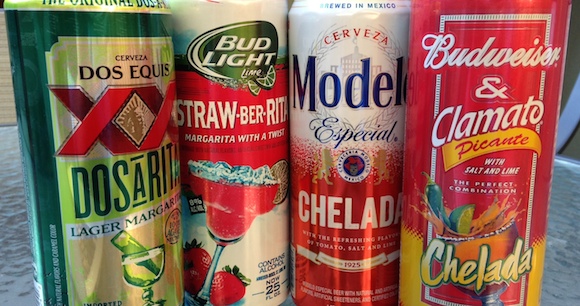 Visit any gas station in America and you'll see these things mocking your organs– beer mixed with ingredients and flavorings to make facsimiles of normal mixed drinks. Except by "facsimiles" I mean "industrially produced horror versions, made by a goblin for his terrible goblin family to drink as they turn their horrible heads and laugh into the portal to Hell."

I'd been curious about some of these tallboys for years, though. Walking past the cold case week after week, thinking about the kind of fearless shit-non-givers who would buy them. Certainly somebody had to be buying these things, or else they wouldn't be on the shelves, right?

Well, last night, that someone was me. I brought home four gas station classics and coaxed two friends, Greg and Francesca, out to sample them with me. On one hand, having holiday-themed drinks was a festive tiny party. Mainly, though, I was concerned that if I attempted to drink all four of these on my own my organs would try to make me die.

The following are the notes taken during tasting. We sat out on the patio and poured them fairly equally amongst ourselves, starting from perceived least offensive and working our way up: 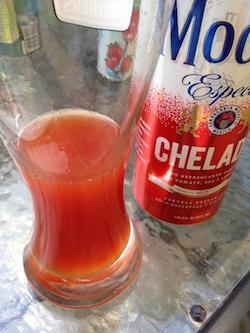 Modelo Chelada - Something is definitely still fermenting in this can, and not in the good way. "This tastes like spoiled juice," was underlined. "It feels like someone puked up a mouthful of Spaghetti-Os into a flat beer." Its thick, sludge-like consistency matches very well with the Boyardee mouthfeel.
Saving grace: If you're an alcoholic on-the-go who needs to combine your morning beer with a splash of V8, here's your can.
Ratebeer: 11%
SA Rating: 2/10

Bud Light Straw-berr-ita - Good lord. It tastes only of sickly sweet Jolly Rancher water, despite being the most alcoholic of everything on the table. It's a lot like mixing 2 or 3 off-brand Code Red knockoffs. The obvious malt liquor taste was accentuated by throat-closing sweetness. It's like if you juiced the foie gras of a goose that drank only Chloraseptic.
Saving grace: "I DO like how this one would fuck you up."
Ratebeer: 22%
SA Rating: 3/10

Budweiser with Clamato Picante Chelada - We had been eyeing this bad boy as being the end boss all night long. It contains clam juice. You remember clams– those little rubber bits they put in clam chowder that taste like a mummy's scrotum? Well, they're a real animal now and apparently their juice is put into a drink for people to pound for the Internet. And compared to the others... this one is actually not horrible? Like if you took a really bad bloody mary and added some stagnant pond water. I mean, let's not kid ourselves here– none of it was very good and I'm never paying money for any of these ever again, but of the lot, this was the least vile one, and the only one I'd consider drinking ever again. But only if I didn't pay for it. And only if my body badly needed some compound present in a mass-produced, overly spicy, alcoholic tomato slurry.
Saving grace: The overwhelming "Picante" seasoning successfully distracts the consumer from a Budweiser Benghazi.
Ratebeer: 1%
SA Rating: 5/10 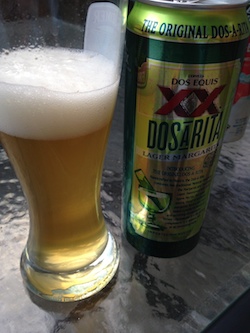 Dos Equis Dosarita Lager Margarita - Looks pretty good in the glass. Almost like normal, human-style beer. That's where the similarities end, however, because this fucked-up concoction tastes like bathroom. The smell is your typical stale beer/pee smell, but its not until it hits the tongue that you get the astringent sensation and hint of lime, which combine perfectly to taste exactly like industrial soap. At last, someone has finally bottled and sold the exact sensation of drinking out of an unflushed bar urinal. Greg likened it to chewing up an Advil and added, "I want to have nothing to do with this ever again."
Saving grace: None
Ratebeer: No score
SA Rating: Not even./10

Afterthoughts: It's now a couple hours later and I can still feel the soupy tomato concoctions clinging to my stomach lining. The disgusting artificial sweetness of the Straw-berr-ita also lingers, and I'm certain it'll cause my pee to be red later, but I don't know whether it'll be from dyeing my kidneys or my kidneys dying. I came back to the remaining half of the Dos-a-rita, totally flat now, and attempted to take a sip. I say "attempted" because I ran outside and spit it out into a plant.

My body feels sluggish now, like it just wants to give up completely. I am in a hell.