Our readers' lives are dear to us. After all, recent evidence suggests that if you didn't have your life you probably wouldn't be able to visit this website as often as you currently do.

With that in mind, we urge you to refrain from purchasing the newly released Face Mulcher produced by Ogco. The product presents an alarming number of reported health risks. Consider these testimonials from actual customers:

"This thing's package is a cardboard box with edges that are VERY SHARP. It only took three minutes of vigorous rubbing before a wound appeared on my neck."

"The instructions are printed on a small slip of paper that folds out like a map. It's certainly handy, but due to the document's unusually small size I found it to be a choking hazard. On four separate occasions I have reached out to my side for a snack, accidentally picked up the instructions, and inhaled them without chewing, requiring the aid of one of my fellow surgeons."

"Be extremely careful with this product! Whatever you do, do not fall asleep while operating the Face Mulcher! You might miss a phone call warning you that a meteor is about to crash directly into your house!" 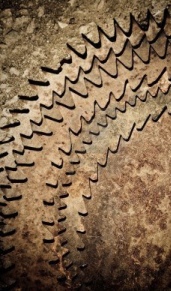 doubt that the Face Mulcher is remarkably efficient at mulching your face. Maybe it's a little too good at its task, if you ask me. You might enjoy it so much that you'll do anything to buy more Face Mulchers, even if it puts your children in harm's way."

"If you melt down your Face Mulcher into a vile liquid and drink it before the concoction cools you can burn your lips real bad."

"I heard the UPS guy's truck and I went running towards him and I slipped on a half-buried tome of run-on sentences and I fell down and broke my legs and I starved to death while the UPS guy looked on in silence."

"For the love of Christ do not operate this thing near an open flame. There I was, minding my own business and mulching my face, when suddenly the light of the flame caught my eye. Transfixed, I stared into its shifting swirls of yellow and white and blue and felt my very soul warmed by some ageless elemental power. I reached out a hand and touched the fire. It was not pleasant. Flames are hot and they burn."

"I approached a white man to ask which aisle the Face Mulcher could be found in, and he shot me then won an award for heroism."

"If you try to kiss the Face Mulcher while it's in operation, you will get hurt very badly. Your wife will see you. You will explain that it was just a harmless little smooch. She will pinch you in your weak spot and she will not let go until you are crying."

"This is probably the most dangerous thing that has ever been sold in the history of man. It's despicable, really. I tried to levitate it with my mind. It simply REFUSED to move. I began to strain harder. My face got red. I even took my index finger and placed it against the side of my forehead. Still nothing. I strained as hard as I could and had an aneurysm. It was horrible. If I had known that was going to happen I would have never bought the damn thing. Also my body is five hundred pounds."

"When you throw this thing off a roller coaster and it hits someone they get hurt pretty bad and the Face Mulcher bounces away into the bushes where you can't find it. It's a lose-lose scenario all the way around."

"I was on an airplane. We experienced a lengthy patch of turbulence. A sense of relief washed over us when the plane steadied. Then the whole world seemed to fall apart. Our plane violently jolted in every direction. The sound of luggage falling from overhead compartments competed with shouts and sobs. A strange thud seemed to come from everyone around me. Moments later the captain tersely explained that we had lost cabin pressure. A mask popped down and dangled before my face. I fastened it to the Face Mulcher. With barely any oxygen in my lungs, I passed out. I almost died that day. All because of that Face Mulcher."