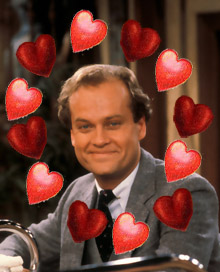 Frasier is trapped under stack of PhDs. A janitor tries to help, but Frasier insists he get his "lowly hands" off. Frasier later wakes at hospital, recalling a kind man with moles saving him!

A rival radio station reveals that Frasier attended a state university. On Air, Frasier lifts the blade to his abdomen, about to commit ritualistic seppuku, but at the last moment a man with a few moles on his face convinces him that life is more than private school. It's about friendship too!

Frasier must explain to Martin why Eddie the dog died from acute caviar poisoning!

At the fair, Frasier and Niles inhale helium and recite Keats. A stranger happens by and Frasier decides he'd much rather hang out with a gentleman with some moles instead of his weenie, though mole-less brother!

Frasier's radio station is bought by Clear Channel, forcing him to play music by "street people" between chutney recipes!

Frasier's condo is evacuated due to a carbon monoxide leak. Everyone recovers. Except Niles, Martin, The British Woman, and Eddie the dog. They die!

Frasier suggests to depressed caller that the best way to beat the winter blues is a trip to Tuscany. Roz thinks the caller hung up, but Frasier knows that the man on the other end of the phone is just amazed that they were both thinking the same thing!

At a condo cookout, Frasier is unhappy with the wine selection. "A pinot in this weather?" He says, bashing the bottle over head of a server. Luckily, one guest brings the perfect wine for the event and no one mentions his moles at all!

Frasier mocks undereducated father, calls him dumb, chimp, bumpy jack, etc. Father reminds him that they're related. "Not any more," Frasier says, ripping all his DNA in half and tossing it out condo window. The Crane's DNA lands on a man down below and meshes with his moles, granting him super powers. He flies up, grabs a weakened Frasier, and flies to Tuscany!

Frasier, in a somber tone, discusses the horrors of war as he applies a topical mole ointment. The man he's talking to never once points out that they're actually watching women's volleyball! 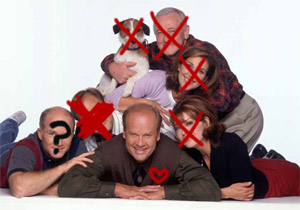 Frasier refuses to stop saying baba booey on air until someone brings him a squash quiche. Luckily, a certain someone does!

Martin, realizing he is not a good enough father for Frasier, sharpens arms to boney points and stabs self. But not before signing parental rights to a mysterious, moled benefactor!

Frasier sets out to learn where his food comes from. Amazed, he discovers the grocery store. Wandering aimlessly through the isle for mole cream, he happens to befriend a handsome man. The two cook ravioli together. It is the perfect night!