Or So I Have Read 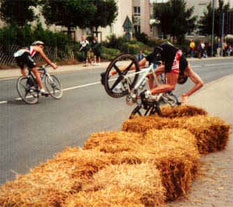 They'll never find their bike here!My mind has been running in more different and unpredictable directions than a three year old wired up tight on a mixture of meth and grey market fissionable material. I spent most of this weekend in the car, driving across three states and then back again, and I've got an excess of energy that has me dangerously near some sort of catastrophic reactor failure. To help focus in I picked up a newspaper in the small town where my family resides and was greeted with a police blotter that would have felt equally at home in a ghost town. There were so many entries devoted to bike theft and recovery that you would think there was a gang of crazed bike thieves who do nothing with their day other than taking someone's bicycle, riding it across town, and leaving it in someone else's yard. The reasoning behind this crime spree is lost on those of us not accustomed to the proud bike-relocation tradition operating in small town Ohio.

In a true police log cliffhanger the accompanying sheriff's log also featured an entry devoted to a deputy being called on a report of cattle loose in the road. The log entry terminated there. Was there a cow on the road?! Was the cow gone? Did the deputy track him using ancient Indian pathfinder techniques?! Did the cow scurry from its burrow and make a meal of the hapless deputy?! These questions as well as the timeless mystery of "what happened to the fifty dollars missing from the retarded person's bank account" (I'm not joking) will have to go unanswered for the time being. I'm sure the crack team of Barney Fife clones will be hot on the trail of sweet justice just as soon as they've solved the latest bike disappearance caper.

Meanwhile, back in the world where the greatest threat to our safety is not an errant cow, my girlfriend and I were involved in a hit and run accident. As much as I would like to be telling you about how I ran over some bike relocating bastard and sped away before anyone could call the cops, I regret to inform you that we were the victims instead of the victors in this particular instance. Michelle was making a turn onto one of the many happening thoroughfares of our quaint city of millions when she was struck from behind by a cad with a huge Puerto Rican flag on the trunk of his car. I don't want to make racist generalizations here, but all Puerto Ricans should be rounded up and summarily executed because one of their number dared to run his car into the car of an upstanding white citizen. I mean we are white and he was only almost white so the gravity of this situation should become immediately apparent. 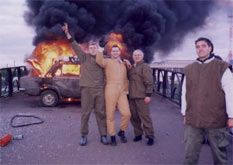 A bunch of Puerto Ricans, no doubt.Not only did he dare to engage in this scandalous display of car race mixing, but he also sped off in reverse down a one way street while I had my back turned. Fortunately if we white people are anything, it's exceedingly clever, and I used my keen powers of observation to record his license plate number so that a pogrom of one could be carried out at his place of residence. Probably a shanty or cardboard box of some sort. Our first lesson in the realities of criminal justice in Chicago came when it was apparent that a police officer would not be coming as requested. When we managed to flag one down who happened to be driving by he sort of laughed and told us to go to the station. I began to voice my outrage that a white citizen should be treated so shabbily in this day and age but the constable drove off in a hurry, possibly to ally with the fire departments who were busy suppressing another coal miner riot. Filthy fucking Irishmen.

Realizing that the only knight in shining armor was the one inside our own hearts, we made haste to the local police station and filed a police report. We were informed that hit and run accidents are a dime a dozen and that we should forget about the guy ever getting caught EVEN THOUGH THEY KNEW HIS NAME AND ADDRESS. This was most distressing and were the constables not armed with some type of crude blunderbuss I might have been inclined to trash them all mightily. Instead I ate a box of Runts which feature two new flavors; the wholly unsatisfactory watermelon and the mysterious and otherworldly blue raspberry. Overall I would have to say that Runts are a candy in decline, as this latest decision in an apparent effort to revive their waning popularity will be met with more than a little hostility from the candy-buying public. So runs the course of all empires, even those ruled by Willy Wonka.

Despite the eventfulness of this weekend I find my train of thought returning again and again to one topic; monkey pox. Where are they from and why do they want to hurt us? Who has unleashed their evil upon an unsuspecting world? If the articles printed in the Internet Times are to be believed then we have prairie dogs to blame for the disease. Apparently prairie dogs have become a trendy new alternative pet. You know the people who own pets like that. They are the same ones who buy those little rodents with the big eyes that die after five minutes and name them after characters from Tolkien books.

"Oh, I imported Tom Bombadil from Peru and he cost 700 dollars and he died from a heart attack when he saw a bug running on the wall. I think next week I'm going to order an African Gray Parrot and teach it to repeat lines from Farscape but never actually take care of it. I will name it Tuvok."

Yeah, that's right; the super nerds are responsible for opening the Pandora's Box of monkey pox. At least monkey pox doesn't have a creepy name though. SARS has that whole AIDS thing going for it with the sinister acronym and West Nile Virus recalls a primal terror of biblical plagues rained down on ancient Egypt. Monkey pox just sounds comical, like the kind of disease the coyote that chases Road Runner would get when he opened a box containing Acme brand Bio Toxin. Fade to black or do a horizontal wipe and when we come back on the coyote he's fine, no more monkey pox. All that leaves for medical science to do is to reverse engineer the horizontal wipe into a easy-to-take injection or gel cap.

While I'm in unstructured rant mode let me mention something else that has been sticking in my craw like a stick made of craw. The whole Martha Stewart thing, I mean fuck her, she's Miss Perfect and I think 90% of the sane population in this country detests her. Still, I can't help but question our government's priorities when she's getting thrown to the wolves for screwing around with like 50 grand while the assholes from Enron and Worldcom are still driving human-fetus plated Hummer IIs back and forth to the Richomercado.

I mean seriously, the entire protectorate or whatever it is of Puerto Rico aside, what the hell does it take to bring some supreme assholes to justice in this country? It's obvious to everyone with a pulse that these guys are the most evil thing next to a robot that's made of dead body parts, so why can't we at least lock them up while they're awaiting trial. It's just rubbing people's noses in how they ruined thousands of lives and got away with it to see them tooling around in their limos and tailored suits. Fuck them, those cunts need to be coming into the courthouse looking like the guy on the subway who claims he lost his legs in Desert Storm and has this cool little scooter thing that I think he fashioned out of his own saliva.

Along similar lines, I would really like to enter our apartment into TLC's "Trading Spaces", but according to their retarded rules they only accept people with houses. My reasoning for wanting to do this isn't so much what another couple would do to our apartment, but rather what I could do to theirs. They would give me a bathroom to makeover and come back to a blood-splashed abattoir and a murder one frame job that would see them behind bars for the rest of their natural lives. In case you find yourself suddenly trading spaces with someone for 48 hours here are a few quick home decorating tips I have devised. 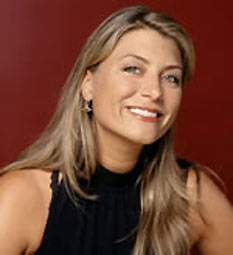 Fashion fake X10 web cams out of glass beads, wood, paint, and black yarn. Deposit them all over the house in unobtrusive places so they keep finding them for weeks to come. It would be like a really creepy Easter egg hunt.

Design a bed that looks like a big comfortable bed with a cushy mattress but is actually just a breakaway panel with a sheet on it. When they lay on the bed for the first time they will fall through into a recess full of your urine!

Use a long knife to cut into the drywall along the base of every wall. Every few feet along every wall punch a hole into the space between the walls and insert a leaky foam bucket containing a large block of frozen blood. Reseal the holes in the drywall and paint over them. After about three days their walls should start oozing blood. As an added bonus this will attract all manner of disease-baring vermin, possibly including prairie dogs.

Rewire every light switch in the house so that it operates the lights in the room most distant from the switch.

Place a tape recorder playing a looping tape of rat sounds underneath the floorboards or in the attic.

If they have pets take them to a kennel or veterinary and buy similar but obviously different pets and bring them back to their house. If they ask questions about their pets feign ignorance.

Place fiberglass plugs into every single drain in the house, but place them about a meter down the pipe so that it will take a while of using the pipe for them to back it up completely.

Systematically scratch out the face of one of their relatives, preferably one of their kids, in every single picture of them throughout the entire house.

Replace their countertops with pressure molded and oil coated blocks of sodium.

Ejaculate onto every single piece of linen they own and onto the pages of innocuous magazines like "Better Homes and Gardens" and "Modern Architect".

Basically my goal is to be the first couple ever kicked off the show, and if I do manage to get kicked off I don't intend to go down without a fight. We're talking hours of footage of me screaming swear words and scratching and sissy-slapping the hosts.

So that's what I did for Father's Day weekend, how about you?