Jeez, that guy's really looking for trouble, isn't he? Doesn't he know what I'm capable of? I can knock a guy out cold with just eighty punches. Boom! Out like a light. I don't want it to come to that at all, but he should really watch himself.

This morning he made a fool of me, calling me all sorts of names in front of everyone. The entire room had a few hearty laughs at my expense thanks to him. He even made fun of my weight, which is something I happen to be very sensitive about. See, I happen to have a poor body image. My loved ones tell me I'm perfect the way I am but I'm constantly trying to lose fat and gain muscle, and this is a great source of shame for me. I'm not sure if he was aware of that or not but I suppose he doesn't really care who gets hurt in his never ending quest for popularity, does he?

Everyone in that room expected me to reply to his hurtful comments with barbs of my own but I sat there quietly, fuming inside yet refusing to stoop to his level. They mistook my inaction for cowardice, and soon word spread like wildfire that I was weak. You know how those people are, when something bad happens they all act as though it's their job to make note of every little detail and blab about it to anyone that will listen. Of course, he knew they'd do that. I suppose he was counting on it.

I went home to my wife afterwards, hoping to recuperate after the morning's traumatic events. She comforted me as I cried for a solid fifteen minutes, and afterwards as I sat in her lap the afternoon news happened to come on. Imagine the shock I experienced when my eyes - still raw and red from the pain he caused - were met with the sight of that guy's smirking mug on my television. I don't know who in their right mind would give a neanderthal such as him airtime, but there he was, telling a reporter that I was a nobody and he could handily beat me in a fight. It was surreal.

I turned off the news angrily, pressing the button on the remote REALLY hard. If I could have turned him into any button in the world at that moment, it would have probably been that power button. This entire situation had gotten entirely out of hand and I intended to put an end to it. 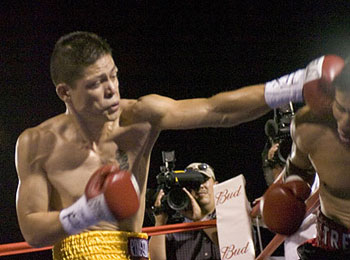 Fast forward a few hours to the present. The bell rings and he hits me. He actually hits me, not once but twice.

While the gloves on his hands manage to soften the blows somewhat, it still hurts. His comments at the weigh-in press conference this morning might have driven me to tears, but emotional pain and a blow to the face are entirely different. I can't internalize all of this for much longer. I'm going to warn him now that if his aggressive behavior keeps up I'll have no choice but to act in self-defense.

Okay, he just punched me in the stomach, and I can understand that. Let me to try see things from his perspective for a moment here. Perhaps I was a bit overbearing with all that talk about self-defense. Upon further consideration it probably seemed like I was threatening him, so now I'll apologize and lower my guard to extend my gloved hand and shake his in an offer of friendship.

Judging by the combination of punches that just connected to my temple, it seems as though I misjudged the source of his anger.

Oh Jesus, that was my kidney. I've never even felt that thing before and now it's like a hot coal burning me from the inside. I just don't get this guy! Was it something I did? I wish he'd let me know as I'd really like to resolve this.

That jab to my throat just now, was that a clue of some sort? Perhaps my voice registers at a very specific frequency in his brain, which in turn triggers severe migraines somehow. That would certainly explain his adverse reaction to nearly everything I say and his preference to fight rather than hold a civil conversation. If I could only decode his cryptic language of brutality!

Ah, the bell once again. The first round has ended, and before we head to our respective corners I'll advise him to use this break to ask himself if he really wants to continue this cycle of violence. Some time alone over there might do him good. After he's separated from the situation I'm sure he'll gain a little perspective and come to the only reasonable conclusion a man in his position could possibly reach. 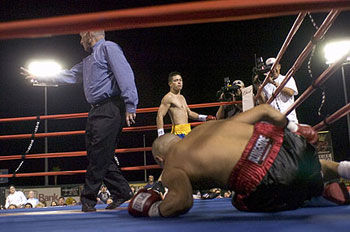 A new round begins, and I hope that with it comes a resolution to this senseless violence.

As he lands a steady rain of devastating blows to my body, I can't help but think that he's trying a little too hard. I suspect he's acting out because deep down he feels guilty about all this. His actions leading up to and including tonight's fight have made him look like a brute with foul manners with no compassion for others, and every punch he lands on my increasingly battered frame could simply be a futile attempt to strike out at his shame. I kinda feel bad for the guy.

Let's see what happens when I tell him that. Oh... no, that didn't help. He seems to have broken my nose. That one really hurt. How many times must he punch me? When will this madness come to an end?

You know, it might sound crazy but I think he just hit my nose again on purpose. Even from my blurred perspective I can see that it's completely flattened and pointing directly to my right, so unless he has some sort of problem with his vision he has to see it too. Oh man, what if he can't see? What if he needs glasses but he can't afford them, or he's afraid to wear them because his friends will laugh at him? The effects of peer pressure are so sad.

There went my nose again. What's the deal with this guy anyway? I'm sorry but I no longer sympathize with this man who is beating the life out of my body, and I no longer care how bad of a person that might make me. Maybe I'll go to Hell for doing this, but I'm only going to give him one more chance to explain himself.

That's it, that's the final straw. If I can feel my arms and legs when I wake back up I'm going to shove this guy so hard. Consequences be darned.