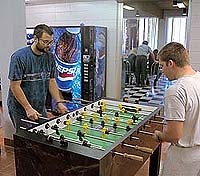 Check out the SUPER COOL athletes that Fooseball appeals to!At heart, the concept of most sports is a flawed, achy-breaky one. Fierce competition between highly trained, skilled athletes is all well and good in theory, but the appeal of a sport is reaches far wider than those who can actually take part in them. Rather than drawing in only the physically fit creatures of Earth such as popular high school kids and snow leapords, sports seem to appeal to everyone. "Everyone" includes a certain percentage of people who are fatty fat fatties who live vicariously through their heroes on the field, while at the same time living pathetically in trailor parks, parents' basements, or pools of their own misery. These people are too gluttenous and unathletic to actually play the games they love. Their Super Bowl parties seem to celebrate the bowl of Onion dip in the middle of the room more than the game on the screen. All the fat and oil these people consume gives most of them a smooth, glossy coat, but hardly does anything to improve their physical condition, or their ability to play. In fact, just about the only thing it improves is the chance for them to die of a heart attack. Alone of course, because no one loves them.

This conflict is what led to the creation of miniature sports. Games like table tennis, air hockey, and pocket pool all were developed by people who just couldn't enjoy the games in their raw form. Even paintball evolved from the feel good sport of hunting and murdering your fellow man. At first, these weren't very well embraced. People like things bigger and better, which explains the popularity of big screen televisions and African-American pornstars, so they were naturally uneasy the first few times they saw the tiny bastardizations of sports. But as time went on, as it usually does, the mini-games began to get their own audience, and many people started turning to them for entertainment. Apparently, something about reducing the size of a sport makes it not only accessable to the unathletic, but it also increases the intensity and affordability elevenfold. Probably the epitome of these games is Fooseball, a table top version of every Scotsman's favorite game: Soccer.

Bo knows Fooseball!How Fooseball came about is a mystery to me, as research or intelligent commentary is far beyond my grasp. When you think about it, Fooseball is a disturbing thing. Little men made of wood, hanging from metal poles, rotate their tiny bodies to smack a hard, plastic ball for our amusement. If you can get past this, you may actually find a game worth enjoying drunkenly on college campuses and bars all around the country. Unless you're a nerd, or had your arms shot off in the Korean war, there's no reason not to enjoy the Foose. It has fast paced action, coupled with a heavy competition factor not unlike competing with your sibilings for parental love. And the best part is that there's absolutely no physical exertion, so even if you're dying of heart and lung cancer, you can still play. For a little while anyway.

Real fooseball players (read: NOT Robots) call themselves "Foosers." There are certain rituals one must go through before they can call themselves a Fooser though. First thing's first - You have to be able to play foose. You must master the arts of passing, shooting, and punching the wall when you lose. Next, you have to name your players. Dimitri, Alexi, and Pavlov are all proper names for your little wooden foose men, whereas "Stud", "Sexy", and "Ponyboy" are just wrong and disturbing. Calling the foose players by their names will help you get in touch with the game you're playing, and give you a better chance of winning. Now that you've done this and established that you're completely insane, it's time to work on your smack talking. Combining swears forms more powerful, compound insults that generally unnerve your opponents much more than single words. Try to avoid repeating terms though, as some meaning gets lost in insults like "You fucking fuck fucked fucking fucker." Finally, you can move on to the last step of being a fooser, which is creating a victory ritual. Whether it's thrusting your arms skyward or dancing like a little girl, you must perfect it and do the same thing each time, as this will become your calling card. When people see you dancing the funky chicken in front of a Fooseball table, they'll surely know who the REAL loser is!

You gotta know when to hold em, know when to fold em if you're gonna play foose with him.Every game has rules, and Foose is no different. Games go to ten points, and putting the ball in your own goal doesn't count. Also, "Putting the ball in your own goal" has nothing to do with masturbation. The greatest crime one can commit while playing Fooseball is "spinning". Spinning is when you just randomly flip the bars as fast as you can, in hopes of sending the ball somewhere near the goal. This heinus act is punishible by no less than death, so it's suggested that you avoid it at all costs. Courtesy is another important rule, so after you win you should resist the urge to have sex with your opponent's girlfriend, wife, or life partner, no matter how they throw themselves at you for being victorious.

Foose truly is the game of every man. It's a world apart from every other tabletop game, and even sets itself past the sport which birthed it. No matter who you are, fooseball will accept and love you. Even if you're a filthy immigrant! Due to the powers that be, Baseball remains our official national passtime. It probably will be this way forever, despite the fact that the Japanese are surpassing us in Baseball just like they did in electronics, education, and just about everything else. But in the hearts of myself, and those like me, Fooseball is the true sport of kings and will never, ever be surpassed. Well, that and Beer Pong.