Cats: God's Way of Saying I Screwed Up

Most people who have read my previous columns about owning a cat are undoubtedly aware of the fact that I own a cat. If you were fortunate enough to miss these literary gems, let me sum up the general idea powering these masterpieces of drama and intrigue: I own a cat. That about sums it all up and provides you with enough backstory and exposition to understand the article I am about to go into. 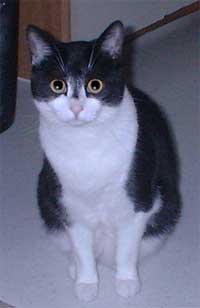 My Cat does not approve of this update!

While I was drinking Pepsi One and trying to think of new ways to secrete sweat from every single available skin pore on my body, my cat suddenly rushed into the room and came to a complete screeching halt roughly four feet away. I'm not exactly sure which room he originally ran out from but judging by his raw acceleration speed, I'd say it was some field in Nigeria. Me, being the quasi-rational human being I often try to pass myself off as, began to search around the room to determine what exactly warranted the 150 miles-per-hour sprint that my cat exhibited. I assumed that it was something terribly important, such as a Nazi blimp attack or maybe a Yeti preparing to steal my fancy endtable but the further I investigated the incident, the less I found. I was perplexed at that point; I mean, why the hell would my cat, an animal that is known for its keen sense of sight, smell, and hearing, irrationally dash into the living room and then proceed to stare at me as if my head had suddenly been replaced by a giant grub vomiting Elmer's glue? There had to be some logical explanation for this event; I mean, everything can be explained rationally. George Washington became the president of the United States because some Indians dumped crates of tea into a pond. Dale Erndhardt died in a fiery explosion because one of the O-rings in his car eroded, directing flames into the external tank which contained liquid oxygen and liquid hydrogen fuel. However, there was no tea nor O-rings in my living room (as far as I could tell); the cat simply tore into the room at high speed just for the heck of it.

Now I'm not somebody to criticize one of God's glorious creatures, but I think he made a few hundred fatal flaws when designing the cat. For example, cats are just plain stupid. Now I know a few hundred thousand million jillion of you people out there will object to this statement, probably with clever responses like "UR AN IDIOT!!!" and "MY CAT KNOWS ALGEBRA," but in all my dealings with cats, I've never found one that has an intellect comparable to, say, one of those cardboard tubes that holds paper towels. I grew up owning dogs, then went to parrots, advanced to ferrets, and am now on the feline level. All of these animals have had their various flaws and shortcomings but I don't think any of them approached the sheer idiocy of cats (except the Border Terrier we owned, which was so stupid it could actually be classified in the same category as plant life). Here's a quick rundown of the animals I've owned:

DOG
Australian Shepherd
PROS: He was really goddamn smart. I think he memorized the entire Yellow Pages one night while I was sleeping. He responded to over 500 different commands including "prep the helicopter, we're heading to Nicaragua." He was also extremely friendly and would routinely do things like help the elderly prepare their tax returns.
CONS: He didn't have a tail, so when he tried to wag it, his entire body would wave back and forth like a flag in a heavy wind. Also he eventually developed some kind of brain tumor which caused his eyes to blow up and make him die, so that wasn't exactly a good thing.

DOG
Border Terrier
PROS: We could throw beer cans at its head for several hours and it wouldn't move or even flinch because apparently its nerve endings span two centimeters and electrical impulses travel through them roughly at the rate of seven inches a decade.
CONS: The dog had some kind of body oil problem in which it generated nonstop goo from every hair on its body. Petting her was like running your hands through Joe Don Baker's pubic hairs. The dog also had the combined intellect of 12 discharged AA batteries. His sole motivation was eating food, preparing to eat food, or the thought of preparing to eat food. If somebody were to suddenly fall into a coma near the dog, I'm 100% sure that when they regained consciousness, most of their major organs would be residing in the dog's stomach

PARROT
Pocket Parrot
PROS: We could shove it into a cage every night, unlike the Border Terrier or my parents. In addition, it despised every single human being in the universe except me. He would sit on his perch, making sounds like somebody ringing a bicycle bell under the ocean, and randomly fly out to nest in somebody's hair. "Oh, how cute!" they would naively comment, unaware of the approaching doom. Then it would happen; parrot shit flew out of its ass, covering their hair with a small pool of what appeared to be chunky style White-Out. I would've laughed at them but I was afraid the parrot would turn on me and begin projectile vomiting into my face while I was trying to eat my Kellogg's Smart Start cereal.
CONS: Birds, in general, don't do ANYTHING. They're like having noisy furniture that you have to feed and clean up its shit. They're on the same functionality level as fish, except if you submerged a bird underwater for a period of three days, it probably wouldn't continue to swim.

FERRET
Two ferrets named "Rotanzi" and "Giai"
PROS: They were absolutely nuts. They'd steal your keys, bottlecaps, and pacemakers and hide them under the couch. They would take their food pellets and place them in strategic locations such as under the refrigerator, inside the VCR, and in the same pile as their poop. Plus they were really cute, especially when they were biting each other and clawing at their eyes.
CONS: To make sure ferrets don't turn evil and start investing your money in junk bonds, you have to babysit them 24 hours a day. I owned these two ferrets back at the time when I worked at Gamespy, a job where I had to babysit my coworker Lady Ice 24 hours a day. If you don't pay enough attention to ferrets, they become extremely rebellious and do things like chew electrical cords, take a crap in the Pope's hat, and call those dirty 1-900 numbers. In addition, they require bathing every 16 seconds or else they end up smelling like Donald Pleasance's rotting corpse.

So now we get to cats. I decided to get a cat on the recommendation of my ex-girlfriend Angela Mason, a bubble-headed waitress from Kansas City who had the emotional maturity of a zygote. She wasn't as nearly as mature as myself, a person who runs a website that repeatedly degrades Geocities sites and uses the word "ass" too much. I went to the local animal shelter and paid their nonprofit organization approximately $400,000 to adopt a cat, thereby freeing him from the dungeon-like atmosphere of the concrete shelter. This was probably the best advice she ever gave me, especially considering her career aspirations included traveling to California to become a makeup artist. 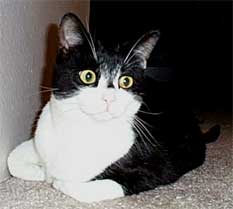 The Cat does still not approve!!!

Anyway, this cat, which I have formally named "Cat" since you can call him whatever name you want and he still won't respond, is proof that even God has flaws. Nothing this cat does has any fundamental base in reality whatsoever. His daily events are composed of the following remarkable activities:

1) Running from one room from another, perhaps because the ghosts of Feline Past and the ghost of Feline Future are undoubtedly instructing him to do so.
2) Jumping on top of objects, running underneath objects, and attempting to somehow infuse himself inside solid objects. Although I'm fairly sure he wants to be pet, he does his best to play "hard to get" and force people to use a Global Navigation System to locate him.
3) Pretending like he wants to be pet, then when you attempt to stroke his fur, he either runs away, falls over, hides underneath the couch, or just vanishes into some otherworldly cat dimension.
4) Staring at invisible particles of who-knows-what, floating around the air and occasionally accelerating to roughly 600 miles an hour. It's really quite freaky; the cat will be looking at some transparent object floating around your head, when suddenly he'll rotate his head 90 degrees to the left and begin staring at absolutely nothing until he decides it's time for him to run into another room for no readily apparent reason.

After observing these highly exciting and mysterious actions over and over and over again, I have come to the firm conclusion that God simply fucked up when he was creating cats. They're not really motivated by food like every other animal. They don't either crave or despise human contact; this outlook shifts hourly based on the current phase of the moon. Nothing a cat does makes any sense whatsoever, and I'm firmly convinced that God left out a few key neurons when putting together the cat. For example, he (the cat, not God) will jump up onto my bathroom's countertop and stare at my reflection in the mirror for approximately 25 minutes, simply looking at me and meowing at random intervals. Maybe he's able to see some Bizarro-world clone of myself in the mirror and I'm really handsome, interesting, and maintain a high-quality website of some sort. Maybe cats have one of those Radio Shack cellphone conversation scanners built into their heads and they're receiving instructions from neighboring cat squad leaders in different buildings. Regardless, I believe that the cat, along with my ex-girlfriend Angela Mason, is one of the creatures that God never truly succeeded in putting together correctly. Despite all their flaws and shortcomings, however, I have to admit that I still hold love in my heart for these magnificent creatures. Well, the cat, not my ex-girlfriend. Nobody would want to willingly adopt my ex-girlfriend.