We all know about the big scandals-- Teapot Dome; Whitewater; Watergate; Billy Bathgate-- but we often forget that no presidency, even the super great ones, was untouched by the icy hand of corruption or the warm,moist hand of luridity and depravativity. We now look back on the first twenty-two presidents and their history of underhanded wheedlings and deedlings: 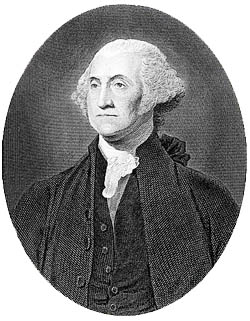 A notorious dandy, Washington wore a new set of translucent wax pants with an extremely low melting point to an outdoor dinner on a hot summer evening. As the night grew hotter, the ladies in attendance were scandalized when they noticed that Washington forgot to wear a wig.

After predecessor George Washington successfully negotiated a secret treaty to buy Quebec from the British, Adams hastily sold the territory to the Algonquin tribe for three magic beans (though a scandal at the time, Adams was vindicated by history: those beans grew up to be Martin Van Buren, Millard Fillmore and Franklin Pierce).

When the British set fire to the White House during the War of 1812, Madison ran into the conflagration to save his prized possession, a comical etching of a pig eating a beet. His six children burnt to death.

A mere six weeks into his term, it was revealed that James Monroe was actually the very same runaway slave, James "Big James" Bovis, who successfully won the presidency as Thomas Jefferson some years earlier.

In an off-the-cuff statement during a press interview, Adams gestured to his groin and referred to the United States Congress as "Dongress."

As the nation mourned the loss of its newly-elected leader, Harrison reemerged and sheepishly admitted that he'd faked his own death in order to avoid paying a four-dollar tab at a local bar.

Tyler was thrown out of the Whig party when, during their annual convention in Philadelphia, a gust of wind revealed that he had real hair.

A nationwide movement of skeptics insisted that Polk's birth certificate was a forgery, and that he was actually a Turkish-born non-citizen named Klop K. Semaj. Though their case was never proven, they irritated Polk out of running for a second term.

In the first presidential sex scandal on record, Taylor's famous nickname, "Old Rough and Ready," was revealed by the press to mean exactly what it sounds like it means.

Revered as a war hero for his role in the Mexican-American War, a scandal erupted when recovered records from the era proved that Pierce fought on the side of Mexico.

After he toppled off the stage during a speech in Pennsylvania, it became clear that Buchanan was actually two children, one standing on the shoulders of the other, draped in an adult-sized overcoat.

Lincoln's legendary honesty got the better of him when he told Vice President Hannibal Hamlin that he looked like an elderly potato-bird that had been left out in the sun to wither. Hamlin never recovered, and renounced the vice presidency a short while later. In the same year, Lincoln's administration was scandalized to the point of near collapse when an editorial cartoon in a Philadelphia newspaper depicted him as "Abraham Stincoln."

Johnson’s rivals attributed a conflict of interest to the embattled president when it was revealed that he was a major shareholder in a company hired by his own administration to refurnish the White House, and also that he was the king of Spain.

Though embattled by several scandals, perhaps the most damaging was the accusation by some critics of the time that his Modernist stream-of-consciousness narration was overly cryptic and impenetrable.

Though Hayes was by no means the first president to teach obscenities to Flutus, the longstanding presidential parrot, the unmatched vulgarity of Hayes’ contributions to the bird’s lexicon outraged the public, many of whom had been specifically named in the parrot’s blue tirades.

Though his presidency was largely unmarred by scandal, some historians now believe that he was actually James “Big Jim” Bovis, a runaway slave in disguise.

While Cleveland is famous for being the only president to serve two non-consecutive terms, his method of achieving this feat-- turning all the calendars at the White House back eight years-- caused significant controversy at the time.