With all of the trouble makers on the Internet these days, keeping track of them is hard work. Luckily, the recent invention of the pen and paper has made it easy to keep track of all the chronic trolls. 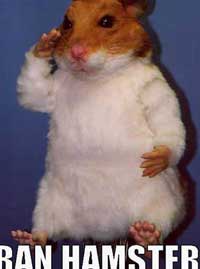 All bannings should be preceded by a funny image like a hamster, a balloon, or a clown. The reason is because the Internet is beyond stupid.Take a page from the geniuses at Valve Software. Like any developer of online games Valve has their share of cheaters. When Valve detects a cheater on their online service Steam, they don't ban the user straight away, but let them simmer before they deliver the final, lethal blow. That way the Internet criminal never knows what specific cheat they got banned for! Gabe Newell, you've done it again. Have another cheeseburger, old bean!

The same idea applies to forums. Did a user just flame you, leaving a whole bunch of steaming dissent on your doorstep? Homie don't play that, sure, but homie also doesn't ban them right then and there. Put them on your shit list and mutter under your breath, "Heh, you've just made my shit list..."

Keep the trouble makers on their toes by banning them later for a different, lesser infraction. That way, other trouble makers won't know what's bannable and what's not! While it makes you look like a raging shit head with a pathetic Internet grudge, that is the price you must pay to keep your forum sparkling and troll free.

Moderators don't get into this business to become popular. Your shit list also helps you keep track of who sucks your dick and who doesn't.

In real life conversations tend to meander from one subject to another. A conversation that may begin as gossip about coworkers may lead to other topics such as the weather, the upcoming presidential election and diaper fetishes.

Well, you may as well learn it now before you learn it somewhere else, the Internet is not real life. There are rules and regulations to stick to on this strict and unforgiving land of policy and conformity. Don't let topics stray off the beaten path! This is the most important thing hackers look for when trying to break into a forum's yummy, gooey, nuget-filled insides.

Off-topic posting is a common threat to your forum and you have to be ready to squash it when it starts like in this exchange from a flight enthusiast forum.

Poster #1: I was on an American Airlines flight from LAX to Dulles and the service was really terrible. The plane was late and the flight attendants were surly and unhelpful. Is it always this bad?

Poster #2: Sounds like business as usual for our airline industry. Not even the boneheads in Washington can fix this mess!

MODERATOR: Hey, hey, hey, this thread is about bad service on American Airlines flights from LAX to Dulles, not politics. Get this thread back on track.

Poster #3: Yeah but part of the reason for that bad service may have to do with government bailouts and deregulation of the airline industry. There is no way you can discuss the problem without bringing up politics.

Poster #4: Yeah I know what you mean Poster #1, I flew on an AA flight from LAX to Seattle and it was just awful. Flying in this country has really gone downhill.

As one of those rebel guys said to Luke Skywalker in Star Wars Episode IV, the second best episode behind Episode V, "stay on target", and your forum will operate like a well-oiled machine.