Listen up, boys: If you want to learn how to BE A MAN, consider enrolling at Manhood Academy. If you thought there were only two steps (1. Be male 2. Live to adulthood), then hoo boy you're in for a rude awakening. As it turns out, masculinity is on a steep decline:

Like slaves bred into captivity, dysfunctional men learn to ridicule the very thought of social freedom. Men today shun the exposure of their own miserable condition, running from the truth like fearful cockroaches. The systematic assault on their male identity proves too much to bear; the unfair assignment of shame causes men to abandon their masculinity. They would rather forfeit their authority than risk becoming social outcasts.

Who's responsible for this shocking cockroach slavery? You guessed it: feminism. You can read all about it in Manhood Academy's e-book The Principles That Govern Social Interaction, where you'll learn the real truths our matriarchal society doesn't have the cojones (that's Mexican-talk for balls) to tell you:

Women fail to see the connection between their behavior and its consequences. Accountability for one's appearance is ignored as feminism encourages shifting blame onto men for any negative reactions. Men find themselves demonized as perverts for staring at breasts on display; animals for constantly desiring sex; and predators for seeking sexual fulfillment.

It may not be "PC" to say this, but it's "BS" how rapists are always getting called rapists just for committing rape. When will civilization wake up and stop slapping judgmental labels on Nature?

It goes on and on like this. If you can't afford to buy Mein Kampf, you can probably get by with downloading this free e-book and mentally replacing the word "men" with "Germany" and "Feminism" with "the Jew." Hell, it even makes the comparisons itself:

Nice Guys are left wearing the 'best friend' label like a Jewish star in a dating concentration camp. 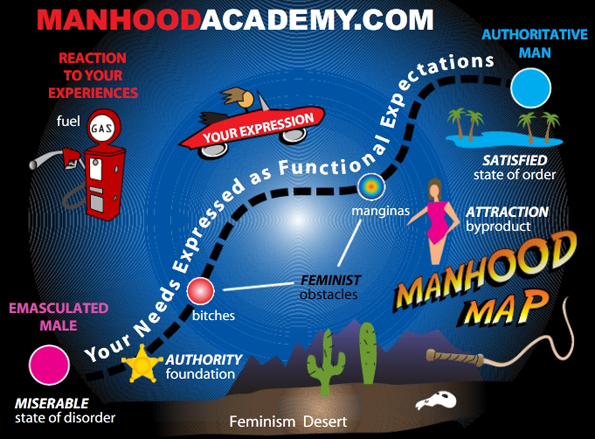 315 pages might sound pretty intimidating, but don't worry because there are several graphic elements on each page, like this one relevant original image but mostly celebrities and cats. The Hulk and Kobe Bryant both show up more than once.

After 60 pages of denouncing women and their uppity desire for "equality," it's time to move on to the next section: regaining your stolen masculinity so you can get some of those women and teach them to obey the proper gender roles.

Like housebreaking a new puppy, reprogramming women from their feminist brainwashing can take some time. The first thing women need to learn is to respect your authority, a goal that is best achieved by threatening them with rape:

However, women today have been conditioned by feminism to believe that protection is a right, not a privilege provided by men. Women assume that men must protect them simply because women demand it or are entitled to it. They fail to realize that men are stronger than women; if instead of asking for sexual access, men suddenly demanded it, there would be absolutely nothing women could do to stop men from taking it by force. Thus, without male consent, women really have no autonomy.

Hm I wonder why this book couldn't find a publisher. Anyway, if they refuse to respect your authority, it's punishment time! Effective punishments include disagreement, rejection (saying "Tyra Banks is an annoying bitch"), the silent treatment, social pressure, using negative assocations (saying "Justin Bieber is so gay"), and "enforcing consequences," which is kept eerily vague. Effective punishment most certainly does not include physical violence, which "should always be avoided." Gee, thanks for the reminder!

Principles is at its best (educationally speaking) when it sets up conversation scenarios, like this one about how Dropping Change at McDonalds as the Key to Positive Change in Your Life, or this testimonial to "You're Tall" as a can't-miss opening line for 5-foot-6 men on the make at the coffee house. And here's a nightmarish vision of what could happen when you don't apply punishment:

Dan: Why are you late for everything? [I'm refusing to punish. I'm being too passive and not stating my expectation]

Amanda: Man! I sent you a text message and... [She violates my expectation of apologizing.]

Dan: Shut up! I don't want to hear your fucking excuses. [Punishing her with rejection.]

Dan: You made me wait for three fucking hours, and I hate that. [Even though I'm frustrated by my lack of enforcing my expectations, I still refuse to punish. Instead of focusing on her dysfunctional behavior, I focus on how she made me feel thereby letting her know she has authority over me. Big mistake.]

Big mistake indeed. Once your dogImeangirlfriend has been successfully trained to fear your authority, she has entered the submission stage:

This is the crucial stage where a woman begins to fall in love with you. Submission is always followed by attraction.

Congratulations, you have graduated from Manhood Academy and are now a Man. Mazel tov!