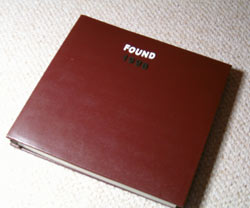 Lost? Each page of my favorite book was written by a different author and its title indicates both its contents and the means by which I came upon it. Found. At a garage sale two months ago, amid the card tables heaped with 21st century suburban detritus. Scratched DVDs of Tae Bo workouts, boxes full of Maxim and FHM, oxidized copper wall ornaments designed to look hand crafted. We want, we want, we want and so much, it turns out, we don't even really want.

It was in a filing box printed with a cartoonish wood grain; an invitation to be placed in the deepest and dankest corner of a finished basement. The lid was simply sitting atop the box, as though someone had recently rummaged through its contents. I squatted down and reached hesitantly towards the box. It was foreboding and dark. I felt like a child preparing to overturn a heavy rock in search of insects. I was half-excited and half-terrified of the scurrying, alien horde I was about to disturb.

No frantic mass of wood lice and centipedes burst from beneath the lid of the box. I peered inside and discovered a thick vinyl album, similar in size and appearance to a photo album. It had a title written across the cover in faintly yellowed and spongy stick-on letters: FOUND 1998. I picked it up and noticed its substantial weight. I opened the album and fell in love.

FOUND 1998 is a compilation, created by an unknown person, of 76 random and seemingly unrelated items. It contains papers, documents, notes, drawings and even torn remnants of notes. Each of these items is strange or amusing in some way. A few are scary. A few are sad. Most are simply random minor events in someone's life: a grocery list, a page torn out of a day planner, a receipt. There is no narrative. Amid the tables heaped with the 21st century suburban detritus I had found the real treasure: timeless personal debris, collected lovingly.

The person running the garage sale knew nothing of the item. They assumed it was one of several other mundane objects left in the basement of the house by the previous owner. They sold it to me for five dollars thinking it was an empty photo album.

I debated for weeks how I should present this, because I want to do it justice. I thought about posting it on our forums and never turning it into an article, but I somehow felt as many people as possible should be exposed to FOUND 1998. Today I will present the first seven pages of the album, I hope you enjoy it. My only alteration to the subject matter is to add an identifying number and title. Some of these are rather detailed and I feel a title is necessary to focus the reader's attention.

You may click each of the images to view an enlarged version of my scan.

There is only FOUND 1998. Tantalizingly, the box in which it was discovered seemed to bear the impressions of more than one volume, but there was no other trace of their existence. Perhaps somewhere, the same person who authored this collection is continuing their good work. Perhaps one day I might discover FOUND 2006.

Update! There is apparently a whole magazine of this sort of thing and it’s even called “Found”. How embarrassing! If you enjoyed this update you might want to check out the magazine.