Frowning for Fall, Crying for Christmas 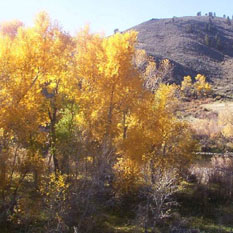 And then my heart died a little.

Even before September "the" 11th, autumn was a somber time of year for a lot of people. The days grow shorter, the air begins to cool off. The leaves begin fading from vibrant greens to grouchy, muted browns and falling to the ground to form a dreary suffocating blanket over the entire landscape. The depressing specter of autumn hangs over you at every waking moment, greedily lapping up the cheer of summer and pissing out melancholy like a desperate barfly hunched over a puddle of spilled gin.

If this describes you, you may be suffering from a condition once known as Winter Depression, but later renamed in an apparent stroke of genius to Seasonal Affective Disorder, or SAD. SAD is thought to be caused by an increase of melatonin, a hormone produced by the Pineal gland. This is suspected to be the same gland that made Pink Floyd boring and caused Bill Hicks to rant like a psychopath for hours at a time. According to the National Mental Health Association, symptoms of SAD include:

a craving for sugary and/or starchy foods.

spontaneous deflation of all balloons within a 10-20 foot radius

Your friends might say "Cheer up, pussy!", "Snap out of it!", "Cheer up!", or "Snap out of it, pussy!" That's why I don't hang out with your friends. SAD is a very real and very serious affliction, ranking alongside Restless Leg Syndrome and Bubblebutt on the Howser/Quinn Illness Severity Index. It affects 20 million Americans a year. That's 200 million every decade! You can't just "snap out of it," but that doesn't mean you're powerless. Scientists and other bald people have been working their fingers to the bone in the hope of turning a dollar off of your self-pity. They've come up with several innovative solutions to help you shake off those frownies and become the screaming, ruthless dynamo you were born to be!

Phototherapy
The Idea: The decrease in sunlight during the autumn and winter months is thought to be one of the causes of seasonal depression. In this treatment, the patient is secured to a dentist chair with leather straps and an extremely hot halogen lamp is left inches from their face for hours at a time. The doctor administering the treatment stands behind a one way mirror and taunts the writhing subject over a loudspeaker.
How It Works: Physical pain and trauma causes the patient to conceal all negative emotions out of fear. Additionally it reinforces the negative stigmas of mental illness by manifesting them physically. This makes it easy for employers to identify potential foot-draggers and keep those profit margins high.
Side Effects: Disfiguring burns, PTSD. 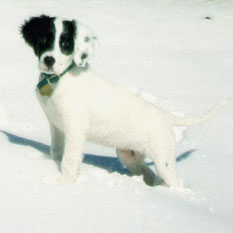 Diagnosis: No one loves you better than an English Setter.

Seasonal Puppy Dog Adoption
The Idea: Based on the established psychological principle that no one can say no to big floppy ears or the sound of little paws skittering across a hardwood floor, this treatment takes an approach that consists less of "tough love" and more of "tough not to love". Each year, the patient will undergo a psychiatric evaluation to decide which breed of puppy is best suited for their specific symptoms. Within 8 business days, a six week old puppy will be left at the patient's doorstep in a wicker basket with a handwritten card saying "This ain't just puppy love!" The animal will spend the winter making adorable messes, becoming a part of the family, getting into things it's not supposed to, and thinking it's a person. Towards the end of March, a collector will arrive to humanely dispose of the unneeded creature.
How It Works: You know that face a dog makes when it knows it's done something bad? Isn't that so cute?
Side Effects: Ringworms, terrific memories

Alcoholism
The Idea: Winter is a punishing gauntlet of holidays and social gatherings, and it's going to take some pretty powerful medicine to temporarily make you less of a drag to be around.
How It Works: How is it that alcohol, a depressant, makes us so happy? That's a question for the philosophers as far as science is concerned. The point is that it does. In addition to being a social lubricant and all around good time, you might find that liquor collecting can be a fulfilling hobby as well. Note to all budding wine connoisseurs: Avoid looking like a duncecap in the supermarket by checking the expiration date before you buy. It's usually stamped on the bottom of the box.
Side Effects: Crazy dancing, loopy legs, less than 1 in 100 patients reported having funny feet.

Talk Therapy/Journaling
The Idea: "Tell it to your LiveJournal!" may be more than just a funny thing to yell at a friend who's grieving the recent loss of a family member. Studies indicate that it might actually be sound psychological advice! The idea of using the mind to heal the mind is not a new one by any stretch of the imagination. It has been in use since at least the 1970's and the results are promising.
How It Works: In addition to regular talk therapy, patients keep a journal throughout the fall and winter, and complete therapeutic writing assignments. Sample assignments include:

Make a list of things you want more than anything in the world! Doesn't that feel nice?

Write down 10 things you hate about yourself and bake that list into a chocolate cake!

If you had to kiss one, would you rather kiss Darryl Hall or John Oates?

Side Effects: Kind of queer.