Writ Large is the Declaration of J.F. Swanton

MY LIFE HAS CHANGED IN A WONDERFUL WAY

Oh, my friends, my customers, my patrons who I would love as my own children, if I had any: what glorious news I have!

Any man who has met me- be he a fellow fur trapper, a trembling lawman or one of the rapists and criminals I take pride in serving on a daily basis- can attest to one simple fact: I am an evil man. I relish the cruelty of my profession. Nothing brings me such delight as the keen of stuck boar, the whistle of a squashed beaver, or the musky grunt of a vanquished elk, one whom I have defeated in honorable fisticuffs and whose antler I have torn off with my own rough hands. Though I devote my body wholeheartedly to excellence in the fur trade, my soul has always belonged to the thrill of blood and mutilation.

Until today, that is. Dear customers, I am beside myself with glee as I announce that my soul, from this day forth, belongs to the Lord.

P.B. Fouke, the greatest man I have ever known, the man who shall sit beside me in heaven in our twin bobcat-lined thrones, the man who has been my inspiration, my competition and my most precious friend for nigh unto twenty years, has saved my soul. He has taught me the gospel, and I now serve none but our God.

While I once sought personal glory by engaging in practices whose barbarism far exceeded the imagination of any decent man, I now commit each and every one of my horrifying atrocities solely for the glory of the Lord. Each time I peel the skin from a living fox with my surgically sharpened teeth, I do it for the glory of God. Each time I catch an orphan child in a Potomac Jugular Vice (Catalog No. 159) and laugh uproariously as each panicked heartbeat sprays an ever-dwindling torrent of blood from his neck, I dedicate my peals of mirth to a loving God. When so frequently I run across the icy prairies of Saskatchewan, clothed only in an oily layer of mink blood, shouting blasphemous oaths to the moon above as all of nature trembles before my fury, I pledge my every crazed scream to my merciful Lord.

My evil was once a pointless attack on a world with which I shared a mutual hatred, but no more! My every evil act now has a purpose, and that purpose is to exalt my dear Lord God. For who is a more powerful and righteous God than a God who can continuously forgive the most evil man on Earth? Truly, his mercy is a testament to his power, and each foul deed I commit adds another jewel to his golden throne.

To celebrate the salvation of my eternal soul, I invite my beloved customers to deduct an additional ten percent from my already modest catalog prices.

MY INTEGRITY IS SECOND TO ONE MAN ONLY 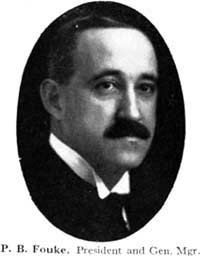 I could attempt to claim that I am the most honest man in the fur business, but that would be a lie so heinous that even my loving God would never in his infinite mercy see fit to forgive it. I am the second most honest man in the fur business. My integrity is nearly unparalleled in this world, but there is one man whose integrity is so powerful that he makes all other men look like miserable gnats by comparison. That man is my dear competitor and longtime friend, Mr. P.B. Fouke.

I will bite out the eyeballs of any man who claims that P.B. Fouke has ever told a lie. I will strangle with bailing wire any wretch who dares impugn the integrity of my dearest friend. P.B. Fouke is a coward, a lily-mary, and a poet's son; he is a molly-coddled infant, totally unfit for the fur business; the sight of blood so shocks him that his employees must carry smelling salts upon their persons at all times. But he is not a liar, he is not a cheater, and he treats his idiot customers with the utmost respect.

Oh, but I respect my customers as well. I offer the lowest prices on traps, and I buy your furs for the highest prices in the nation. I will stake my considerable reputation as the world's worst man on the promise that I offer the fairest deals in the industry. I will beat any price offered by P.B. Fouke by fifteen percent, even if I should run myself out of business in doing it. My dealings with customers are as fair and honest as the dealings of any other trapping man, P.B. Fouke included.

But! I am NOT the most honest man in the industry; I broke my word once. You see, I once made a pact with my dearest friend, Mr. P.B. Fouke that if ever he became snared in one of my famously cruel traps, I was to kill him immediately. I gave him my word of honor that I would snuff his candle before the nefarious machine could drive a salted iron spike through the pupil of his eye.

But one Wednesday night nearly a decade ago, I broke that promise. It was after one of our customary Wednesday suppers, a tradition that we uphold to this very day; P.B. Fouke had imbibed perhaps one too many snifters of my famous mooseblood brandy, and was feeling quite a little tipsy. As he stepped onto my well-trapped porch, his stumbling foot planted squarely in the jaw of my Chickahominy Testicle Mauler (Catalog No. 022).

Instantly, he recognized the click of its timing spring (for, you see, one of the cruelest elements of the Chickahominy trap is the anticipation of knowing that your testicles will soon be devoured by the grinder-jaw). His begging and squealing was so pathetic that I could not bear to kill him, especially since the trap had not yet sprung. In a regrettable act of uncharacteristic mercy, I disarmed the trap instead of killing the ninny where he stood. As he clung to me and wept, I vowed never to break a promise to my customers as I had broken a promise to my best friend.

And here's a promise I won't break: I promise that I will honor your requests to deduct another ten percent from my catalog prices, in addition to the ten percent you have deducted to celebrate my salvation.

IN FOND REMEMBRANCE OF M.V. FOUKE

If my life holds one regret, it is that I never satisfied my carnal designs with regard to M.V. Fouke, wife of my dear friend P.B. Fouke. Her recent suicide was heartbreaking to me, and I know that it was deeply felt by her husband and children.

However, I have no regret that my secret whisperings caused her to take her own life. While I meant only to shame her into admitting her lust for me, I don't doubt that the power of my words so scandalized her that she was forced to commit suicide, and with good reason. I can only speculate that she felt such deep shame in her marriage to the beardless sissyhammer known as Philip Bond Fouke that she was left with no alternative.

I pray for her soul, and I pray for an expeditious grieving process for my dear friend Philip and his foppish son.

ALL HAVE FAILED TO CLAIM MY BEARD

My agents make daily progress toward claiming the pelt of my most trusted friend, P.B. Fouke, for which I have offered a reward of five hundred dollars. I regret to inform you that the agents of P.B. Fouke have not enjoyed similar progress in their quest to cut the beard from my face.

P.B. Fouke, a man with a chin as bare as the ass of a newborn, claims that I stole his beard and put it on my own face. I know not what manner of fever dream could inspire such a fantasy, but he is utterly convinced that my beard was once his. Being the fine friends that we are, Mr. Fouke and I have agreed to disagree, and we leave it at that.

I certainly can't blame him for offering a lavish reward for the theft of my beard; if I had the heartfelt conviction that another man had stolen my beard, I would not rest until it was back on my face. Even so, I have a God-given right to defend my whiskers from interlopers, and I have done just that. No less then seven men have died in their attempts to claim my bristles, and I have no doubt that many more shall have fallen by the time you read this.

The man who got furthest in this foolhardy endeavor was none other than P.B. Fouke himself, who masterfully crept past the nearly three hundred traps that line my gardens and succeeded in reaching my chambers. His workmanlike attempt was cut short when he stepped into the Waccamaw Eyebleed Trap (Catalog No. 112) that lies primed by my bedside at all times. Annoyed by his screams, I once again chose to disregard our years-old pact, and I freed my poor friend before the pin reached his brain. After I doctored his ruined eyeball, we stayed up late into the night, drinking and laughing and reminiscing about old times. Although he left beardless and half-blind, we're better friends than ever.