The Promise of P. B. Fouke is Indefatigable 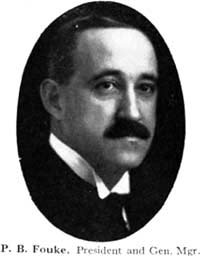 NO RIGHTEOUS MAN CAN NAME A BETTER PRICE

If you, my treasured customer, can find any man or organization offering a better price, I will make you my Vice-President. If by chance you are of the weaker gender, I will take you on as my paramour and father your children, naming the first male child my Vice-President. Should your womb be DESOLATE, I will give you a fur coat and pity you with the same level of enthusiasm I have for the fur trade. That is how strongly I believe in my prices and quality of service.

THE PROMISE OF P. B. FOUKE CARRIES THE WEIGHT OF TWO HONEST MEN

Never shall a man utter this phrase: P. B. FOUKE IS DISHONEST! It can not be said without sinning in the all-encompassing EYE OF THE CREATOR. Even my enemies can not say this. P. B. Fouke may well be a synonym for honesty in the great language tomes of tomorrow. I work hard so that my hundreds of thousands of customers can agree: P. B. Fouke exudes more honesty than any one single man. Perhaps an exceptionally large man bearing a high degree of honesty could compete with me, but per average it takes two honest men to rival my integrity. I say this not as a boast, but as the gospel truth, for which I am sworn by nature to repeat.

My esteemed trappers and shippers are no doubt aware of the profane claims made by Fouke Fur Company's chief rival, Mr. J. F. Swanton, President of the ghastly Swanton Furs outfit. His fur operation has succeeded by employing the EXACT OPPOSITE of every motion carried out by P. B. Fouke on behalf of the Fouke Fur Company. Where I have built an empire on virtue and hard work, J. F. Swanton has sired a demon that mirrors the blackness of his own heart. As moral men, it is OUR DUTY to keep J. F. Swanton from achieving his ends. To conduct business with him is to shake hands with Lucifer himself, thus forever unraveling your most sacred filament.

Swanton seeks to return the fur trade to the dark days of the Beaver Wars, when trappers, stained with HUMAN BLOOD, sought to kill one another before animals. It is this savagery that led to his exile from the Masonic Brotherhood, where he and I first laid the foundations of a professional and personal friendship that continues to this very day. Sadly, it would seem his tenacious mind traps caught hold of a fierce demon, and the better part of his soul could not hold ground amidst the fiery proclamations of certain evil.

A man learned in the ways of trapping and the Lord should see Swanton for the man he is and readily claims to be: A BEASTLY SUB HUMAN ABOMINATION. He wears his beard and hair like a tempest of hatred that surrounds him every waking moment of his tormented existence. I will tell you something else about his beard: it is ill gotten. He tore that beard from my face one night as I slept, affixed it to his deceitful countenance and claimed it as his own. Since then he has done a harrowing job keeping it in order. Please, dear reader of the Trappers' Partner periodical and catalogue, take heed of his true nature. Give he his way and the fur trade would most certainly be brought to its knees through the promotion and proliferation of sub par practices and ideals.

I will agree with J. F. Swanton on one fact, which I hold INDISPUTABLE before God. Trappers are indeed born as such. I HAVE BEEN IN THE FUR BUSINESS SINCE CONCEPTION. My earliest memories occurred in utero, wherein I dreamt of trading my amniotic empyrean for a warm fur coat. It is perhaps this dream that compelled me to strike out on my own and leave my mother's fertile womb five months early. The fact I clung mercilessly to the hairs of her nether regions as I was being birthed underscores my innate love for fur and the fur trade.

Please do not mistake my words as the condemnation of J. F. Swanton as a man. For as evil as he is, he and I are the best of friends. It is my firm belief that without evil, man would not know good. This reason shines light on the need for men like J. F. Swanton to thrive, so that those of us who embrace RIGHT and GOOD have examples of what it is to not.

A WORD TO MY ASPIRING ASSASSINS

It has come to my attention that my steadfast friend and competitor, J. F. Swanton, has placed a bounty on my head. This is not the first time Swanton has called for my death, and I assure you that it will not be the last. I invite all men to take his challenge in the name of good sportsmanship. I must warn you: I protect my home and my family with the very same quality traps sold in this catalogue. Yes, the very same. As such, you will find yourself severely disadvantaged if employing devices sold by Swanton Furs.

Bear this in mind as well: a true trapper knows that one of the most important aspects of trapping is to expunge the human odor. My keen nose is adept at recognizing scents, human or otherwise. I must call attention to the unfortunate reality that readers of J. F. Swanton's periodicals tend to be poor in character and rich in odor.

TRAPPERS AND SHIPPERS: $600.00 TO THE MAN THAT RETURNS MY BEARD TO ME

MY BEARD was last seen affixed to the crooked face of J. F. Swanton, proprietor of the morally bankrupt Swanton Furs. It was taken from me in the night while my mind lingered in a laudanum-induced trance. Aside from hosting my beard, J. F. Swanton can be identified by his distinct pungency and his inveterate consumption of Indian root pills.

Once you have acquired the beard from his cadaverous form, ship it to me at once. If my chief grader R. J. Heckwolf determines it to be authentic, I will award you the generous sum of $600.00 for your troubles and quality labor.

Some dull men will ask: Philip Bond Fouke, why have you not simply grown a new beard? The answer is that I am a man of principle and principled men do not capitulate to thieves. Save for divine edicts, what is mine is mine alone. No man should ever be called upon to replace that which is stolen from him when the thief and plunder are explicitly known. To expect as much would be to reward thievery and punish honest men.

NEWS FROM THE RECENT ALASKAN EXPEDITION

I have returned from a trapping expedition in Alaska, where I was joined by my esteemed allies at the U.S. Government Alaska Sealskin Department, S. J. Pingree and G. Donald Gibbins. The three of us, flocked by a small battalion of native enlistees, spent the days trapping the wild animals of Alaska. Together we amassed an impressive pile of seals, polar bears, moose, lynxes, werewolves, foxes and one whale, which conveniently beached itself on one of our traps. No doubt the intelligent fish was keen to inspect the nature of the overwhelmingly ingenious human device.

It is important to me that we share in our successes, so I ask that you kindly DEDUCT ten per cent (10%) from all catalogue prices. May your trapping endeavors be as rewarding as ours!

MY COMMITMENT TO QUALITY GROWS STRONGER WITH EACH PASSING MOMENT

In the time it took me to write this I have learned to love the fur trade even more. My respect and admiration for the customer has amplified itself tenfold. My desire to provide you with the best service, products and prices has grown so intense that I fear my body may well SPARK ITSELF AFLAME in the very near future.

I could promise you the best experience humanly possible when dealing with me, but that would be a GROSS UNDERSTATEMENT. I can assure you as sure as the sun rises and sets each day that you will be fully satisfied in all our dealings. If you are not, then it is certain that you are J. F. Swanton and your beard is rightfully mine. To all my other customers, you have my sincere gratitude and admiration from now until the end of time.