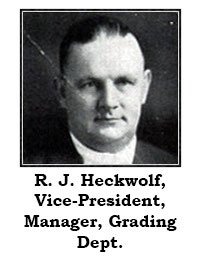 My name, dear reader, is R. J. Heckwolf. Many of you know me by reputation, as chief grader to Mr. P. B. Fouke and the unrivaled Fouke Fur Co. Said institution is the shining jewel of St. Louis, the wondrous Mid-Continent Metropolis I call home.

As chief grader it is my duty to assign value to all furs received, and it is the task I was born to do. There is a primal fire that burns within me, one only quelled by the perfect execution of my duties. I have been grading furs since infancy, and indeed, I believe the Lord himself created me as His precise instrument to satisfy this critical task.

It is my honor to receive furs from you, the millions of trappers and shippers loyal to the Fouke Fur Co., and I trust you will all agree that my appraisals are fair and unimpeachable. Following the example set by Mr. P. B. Fouke himself, I would sooner douse my nude body in fertile doe urine and throw myself at the mercy of the savage wilds than suffer the indignity of questionable workplace performance.

No man has ever questioned my work. Find me such a man, and I will gladly recuse myself from the civilized world in grim fashion.

There is, however, one other thing that ignites a fire within me. I am most thankful to the great P. B. Fouke, my esteemed employer and champion, for allowing me the platform and audience to share this passion with the public general.

With that said, I shall delay no further. Here is what I stand before you to declare: I am disgusted beyond all measure by the growing abundance of small dogs in the world. This vile plague has been spreading from Europe and the Orient with increasing potency. I cannot walk the fair streets of my darling St. Louis without seeing women carrying their tiny canines, held in hand like garish jewelry.

I ask what has become of the noble hound, whose size was such to take down even the strongest man? Once upon a time the sight of a dog was one of awe and respect. We met as physical equals, with only our human cunning giving us advantage.

Now my beloved friend the dog has gone astray. He has been made a science experiment by the misguided elite, racing one another toward some gruesome finish line. There, at the end of that terrifying race, will be a dog so miniscule, it will be invisible to our eyes.

As I see it, concerned readers, there are four fatal flaws present in the small dog, and I shall discuss them all.

In breeding the small dog, man has removed all dignity from the canine. These tiny abominations exist only as prop, as costume jewelry, as spectacle. Their dreadful little eyes seem to cry out End my misery. It is as if man -- and I use "man" with some unease, for these miniature mutts are largely the machinations of women -- decided to play God with every intention of losing. One cannot be dignified when one has been molded to embody shame.

The prime function of all animals is to provide resources for man. The small dog provides less of everything. In skinning a small dog, you will find less fur. In preparing a deceased small dog for taxidermy, you will end up with a smaller piece of taxidermy, one scarcely worth the bother. In fact, it would take an expert taxidermist many small dogs to prepare a reasonably sized canine taxidermy. I have tested this theory, and it proves true. If presented with the pelt of a small dog, I would be required by the ethics of my trade to declare the offering, no matter how pristine, unsuitable due to its inferior size.

Normal-sized dogs provide a medley of uses, from shepherding or pulling wagons to advanced functions such as hunting down criminals. Try to muster the same function from a small dog. Attach a heavy cart to the mouse-sized mutt and see him immobilized. Let him herd the sheep, and be crushed beneath their hooves. There is no task for a small dog that cannot be performed with greater outcome by a large dog.

Finally, most egregious of all, dear customers, the small dog is simply less dog. Who among us has looked at the noble canine and remarked, Give me less? Indeed, who has looked at anything Good and arrived at such conclusion? We are not dealing with a vice like alcohol. There is no need for temperance when it comes to the canine. There is nothing in the canine experience improved by miniaturization, yet so much lost. Should we also stunt the growth of humans, too? We would all enjoy more space and a bigger world if we were smaller. Nonsense!

The Devil is at work in modern times, and the small dog is proof of his cunning. Our truest ally in nature, the noble canine, is being corrupted. If these vile breeders have their way, soon all dogs will exist beyond the realm of sight. I fear a day is coming where only the most powerful microscopes will be able to prove the continued existence of what was once Man's Best Friend.

And when they are beyond our reach, which animal will take their place? Surely not the cat. Are we to throw in our lot with monkeys and their savage unpredictability? Are we to walk hand and paw with raccoons? Are we to hoist indignant sloths upon our backs? No dear, reader, we will do no such thing. Hope is not lost! 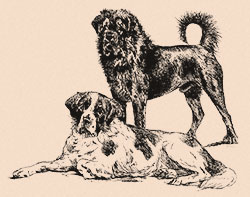 That is why I, R. J. Heckwolf, propose a different path. Outside of grading furs, a passion I love more than my wife and children combined, I endeavor to only one other cause: that dogs should be bred to the grandest sizes allowed by the laws of physics. Only when bone structure can no longer support the full weight of these majestic mammoths must we step back and declare our work done.

I say, if we are to play the role of God, we must endeavor to win. To that end, I have for some time rented a warehouse on the corner of Thicket Avenue in St. Louis. I ask that you bring your largest and most fit dogs there, for the purpose of furthering my goal. You will be paid a fair sum, with larger specimens being more valuable. You have my pledge that I will not rest until our friend the dog is elevated to glorious proportions.

Dear customers, I envision a world where our canine companions dwarf even the elephants of land and whales of sea. Imagine our dogs towering over us, or carrying us on their backs as we conduct our daily business. That is the future I am working to build in the eight hours a day I break from grading furs. I have not slept in several months, and indeed I have no intention of sleeping until my work is done. When action is demanded, man must set aside luxuries and comforts.

You have always known me to grade all furs fairly. Now you will know me as the man who grades all furs fairly while elevating the canine to the status of Living Monument. I ask that you join me in this mission, and let us together create the future our dogs deserve.

Tell me, treasured reader, who would look upon greatness and ask for less? Surely not any one of sound mind. We will not strive for less -- we will achieve more!

Thank you to P. B. Fouke for the stage, and thank you all for joining me in this righteous crusade. Godspeed to us all!