"See that mountain way off in the distance? You can actually go there." We're repeatedly told this scenario is a mind-blowing example of player freedom. Start walking towards the mountain. Five minutes later you're there. Look around for a few moments. Now maybe find another place to walk to or have the same fight you've been in a hundred times. Congratulations on all this freedom.

Divinity: Original Sin offers a different kind of freedom. The freedom to be a thieving, environment-altering dumbass. It's not about how massive the game world is. It's about being able to do very stupid things at any given moment, and having those stupid things impact every other part of the game from dialog to stealth to combat.

What do I mean? Every object can be interacted with. Most can also be picked up and moved or thrown. Every object also has properties that you'd expect in real life. A candle can be stolen from a wizard's lab and laid down on top of a pool of oil to start a blaze. Place a barrel on that fire and it will burn. If the barrel is full of water it will put out the fire when the barrel cracks open, leaving a cloud of steam that acts as a visual barrier. 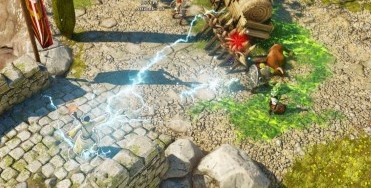 There's also ice, electricity, blood, and poison. Elements can be spilled on the ground, dispersed as a mist, hurled as compact magic bolts, rained down in a huge area, or applied to arrow tips. They all interact with objects and each other the way you'd expect, and can be combined whether you're in a fight or just standing around in your Smelly Panties (an actual piece of equipment that improves your charisma, naturally). You can even resort to simply dropping heavy things on top of people, creatures, pressure plates, and traps.

Instead of putting together a proper review, I'm going to share some of the dumbest things I found myself doing. None of them involve walking to a distant mountain, but I hope they are acceptable nonetheless.

At one point I came across a mother grieving her daughter in a graveyard. Luckily, I always carry a shovel in my backpack. With a few jaunty swipes of my shovel I dug up the daughter and plopped her at the feet of her mother. The woman attacked me, which was understandable from a certain perspective. My wizard's Teleportation spell lifted the mother fifteen feet in the air, then dropped her on top of the corpse of her daughter.

Earlier I stood on a dock watching a ship burn. The townsfolk scrambled to put out the fire. A simple cast of my rain spell could have extinguished the flames out in an instant.

Unfortunately for the boat, I was preoccupied. The only helmet in my possession was a bucket, my only two-handed weapon a fishing rod. I had come across a pumpkin and knew that it could have been crafted into a Jack-O-Lantern helmet with a small knife, but merely considering the act filled me with shame. My equipment needed upgrading, which meant coin. I decided to rob a dock worker whose sole possession seemed to be a basket of fish.

My partner distracted the man by striking up a conversation. As they spoke I stacked a half dozen crates in a semi-circle around them to block the prying eyes of the dock urchins who were still scrambling to put out the fire. Then I snuck behind the mark and picked his pocket. There was only a fish. I took it.

The ship was lost to the fire. Before moving on, I added another crate to the semi-circle to trap the man I had just robbed, then cast my rain spell to drench every crestfallen wretch on the docks as they watched the smoldering ruins of the boat sink.

While exploring a beach I came across a despondent orc, who asked me not to disturb the nearby relics of his people. I agreed with his request. This impressed my partner, which awarded me with +1 to some stat like Kind or Considerate. I immediately disturbed the nearest artifact. The orc stirred, angrily approaching me. A bolt of ice from my wizard froze a puddle as the orc crossed it, causing him to slip and fall down for several rounds of combat.

With the orc incapacitated I carefully a barrel full of poison directly in front of him. He couldn't move, but he was surely able to see what was coming. I opted to pass on my combat turns to let the situation sink in. When the orc stood back up I used an electric spell to charge the puddle of blood at his feet, stunning him again.

As luck had it, a torch had been planted in the sand. A few puddles of oil soon became a rivulet bridging the poison barrel to the torch.

After the fight I felt a little guilty. My AI companion wanted to have a chat about what had just occurred. Uh oh. Was she upset about my actions? No. She wanted to congratulate me for handling the fight so well. It renewed her confidence in our ability to take the fight to evil.