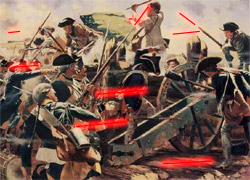 ZAP, England!In 1750 or something the United States of America declared war on England who was occupying our country with troops. They tried to make Americans into slaves and Benjamin Franklin and George Washington created a big fuck you letter to them entitled the "declaration of independence." It was pretty wordy and in retrospect sounds a little gay, but you just have to remember that it was written back before they had words like "fuck" and phrases like "go fuck yourself." This letter was mailed to England on the third of July.

The very next day the American army, commanded by George Washington, defeated the king of England on the field of battle. Washington personally defeated the king in a duel and then he was all about to cut his head off but he hesitated thoughtfully and said "no, that is what you British do. I will spare your life. Go back to England and never return." The United States never fought the British again and lived peacefully with its neighbors Canada and Mexico.

It wasn't until many years later when the French and British begged America for help that we involved ourselves in World War I. They were about to lose that but we kicked the German's asses for them. Then like 50 years later Germany had forgotten about the top shelf beatdown we handed them so they started up again and we went back over there without Britain or France even asking and Teddy Roosevelt was like "unfinished business" then he fucking harpooned Hitler right in his face. There were explosions everywhere and somehow the Japs got uppity too and so we bombed them back down into their caves. I'm getting off topic though.

I hope everyone reading this is just taking time out from their incredible Fourth of July celebration. For those of you who aren't lucky enough to live in the United States and enjoy all of our freedoms (we are by far the freest country in the world) then maybe you can light some sheets of paper on fire or something and pretend they're fireworks unless some sort of Frenchy cop comes in with a waxed moustache and says "sacre blue, what does this look like, America? You are all slaves to our communist government! Put that out immediately!" Meanwhile in the USA we are exploding things that have no business being exploded like boomerangs and clouds and shit. Things you didn't even think could be blown up are getting blown up right this minute. Last year in Chicago some dude managed to throw a cherry bomb into fifth dimensional space and blew that up all crazy. 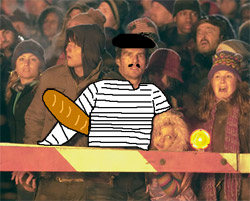 Look out aliens, Frenchie Cruise is going to take you down!Speaking of space, NASA is proving once again that we don't take shit from space foreigners either by blowing up a comet. I hope there were like ten thousand little green space Mexicans on that thing headed to earth to take all of our prized crop-picking jobs and they were just like "KA-POW!" Happy Fourth of July, astro-hombres!

Somebody who forgot how awesome we are at blowing crap up is Steven Spielberg. I saw his "War of the Worlds" movie over the weekend and it was freaking retarded. First off, the robots are made out of lightning bolts, how stupid is that? I can't even make a basket out of lightning bolts. Second off, why didn't the army just blow the crap out of the robots? They keep showing these tanks and soldiers driving around everywhere and jet planes but then they all go over a hill or something and burning trucks come back over the hill. What is that, the Human Torch behind the wheel? Did their cookout get out of control? They shot like a billion missiles at the robots so why aren't they dead?

So the Americans can't blow up a robot, but then that hippie guy Tim Robbins says "the Japs blew one up in Ching Chong land" so what the hell? How come the Japs figured out how to blow up a robot and we can't? We are totally the experts on how to make shit blow up. They are like the experts on how to give you food poisoning from rice or maybe on how to put an eye out with dental floss. What was the last awesome thing the Japanese blew up? Pearl Harbor. They blew that up and then we had atomic bombs falling from the sky. We blew all of Japan away! Why didn't we just drop some atomic bombs on the lightning robots in "War of the Worlds?" Bullcrap!

The only awesome part of that movie was at the end the robots started getting dizzy and a bunch of soldiers figured out that when they're dizzy you can blow them up with missiles. The soldiers shoot a bunch of bazookas at the robot and totally blow it up and then it falls over and pukes out a crazy baby and it's awesome. The gayest part of that movie is when Tom Cruise is like "no, my daughter" when the hippie guy is about to nail one of the mushroom baby things with a shotgun. 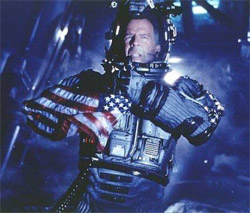 Now that's more like it!I mean seriously Tom Cruise, I know you love your daughter Katie Holmes a lot, everyone knows it, believe me, but if a hippie dude like Tim Robbins has the sack to blast a mushroom creature with a shotgun and you're crying like a woman after a tough lesson then I just don't know what to think of you. Tom Cruise sort of redeems himself by feeding a robot some grenades but as far as I'm concerned it was too little, too late.

Forget about that movie. The only movie you need to see during this time of year is "Armageddon" because nothing could be better at bringing home exactly how good Americans are at blowing crap up than having Americans blow up a giant space comet. I'm talking way bigger than the comet NASA just blew up. Bruce Willis and some other dudes go up to the comet and then they drive around in a giant space truck and the best part is they put a machinegun on the space truck!

I bet if Russia or Europe or Germany or somebody sent their mission up to blow up the comet and they had a space truck it would be small and there would be no machinegun. I mean really, they would be like "why do we need a machinegun on our space truck that is ridiculous what could we possibly shoot" and of course the answer to that question is "everything." This one ugly guys even goes crazy with the American spirit and he just starts wailing away with the machinegun because hell, that's what they put it there for.

It's awesome. It's second only to "Independence Day" for proving how awesome Americans are at blowing the crap out of crap, but that movie they dilute the message by having people all over the globe blowing crap up. They even have some Egyptians blowing crap up. With what? The Sphinx? They don't have any jet planes with bombs, but I guess that's why it's called "science fiction." 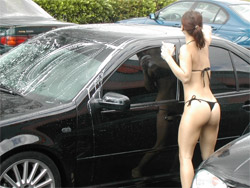 Anyway, I've got to go guys, I've got some Johnsonville brats that I need to cook up. After that there is this car wash these high school girls are running down the street and I want to see if I can get away with jacking off in the front seat while they clean my windows. It worked out last year but I think the old bitch that runs the car wash saw me wipe off on one of the girl's shoulders so I'm going to have to bring a spare sock this time.