Detective Stabler leaned back in his chair and squeezed the last few drops fortified fruit juice from his box of Hi-C. 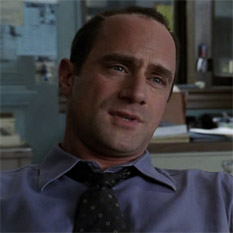 "You put one scumbag away and three more pop up to take his place."

"Elliot, your first priority is protecting the citizens of New York from the scum that would cut their throat in a second and let them bleed out on a sidewalk. Your second priority is taking care of your body now so you don't have problems later. You're a model cop." Captain Cragen snapped his suspenders playfully, yet without a hint of levity. "If you need me I'll be in my office celebrating the diversity of this fair city." he said, making a 'jerk-off' gesture with his left hand. He winked at Elliot and shut the frosted glass door behind him. Elliot shook his head because that was a pretty insensitive thing to do.

Stabler returned to his paperwork. Everyone else around him seemed listless and subdued, but not Elliot. He knew that the trick was getting plenty of sleep. Besides, he thought, who wants to watch the garbage they show on late night television? He certainly didn't.

He was leafing through the ME's report on a 16 year old runaway who was bludgeoned with PVC pipe and dumped in the East River when Olivia got there. Her hair was very pretty and she didn't need to wear makeup to impress boys because her self-respect was impressive enough. Elliot gave her a chipper greeting and handed her a juice box.

"Rape." She said, tossing a manila envelope into Stabler's lap. Several glossy 8 x 10 photos spilled out onto the floor.

"Looks more like Italian food to me. The marinara sauce looks hearty, but the presentation leaves something to be desired."

Olivia cringed. "Elliot!" She snactched the envelope from his hands. "Oh God. Dexter's final in photography! If we have this then who has..."

Benson and Stabler's white Crown Vic slowed to a stop along the curb in front of the Benjamin W. Jefferson Academy, a prestigious year-round high school for gifted and portly students, namely her nephew Dexter Benson. Munch and Fin were already there, intimidating whoever looked the weakest. 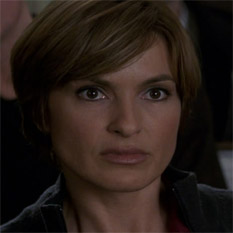 "You might look at me and see nothing more than a pretty face, but trust me I'm a strong, independent woman who defies gender roles like it's going out of style. Tee hee!"

"Smoking in front of a school? Do you know how many tickets I could write you, son?" Fin snatched the cigarette from the mouth of the quivering sophomore and pinched it out with his thumb and index finger.

"Cops don't scare me." the kid sneered. Fin Tutuola ignored his retort and nodded at John Munch, who silently assumed a crouching position behind the student at knee level.

"A real firecracker, huh? Just in time for the holidays." Fin shoved him lightly, which sent him toppling backwards over Munch. "Take a load off, kid."

Munch brushed himself off and jogged at a Belzerly pace towards Benson and Stabler, while Fin apologized to the young man whose well-being he was looking out for. After all, people appreciate it when you try to help them, but no one likes a bully. He also reminded him that although firecrackers can be fun to watch, they aren't toys. Don't ruin a fun holiday with carelessness because where's the fun in that?

"You mind telling us why we're here, Detective?" Munch snapped.

"We're looking for my nephew, Dexter Benson. He's staying with me while his alcoholic father detoxes and looks for a job. My sister-in-law bailed on him when her Manhattan sugar daddy decided to move to the Cayman Islands to beat a tax evasion rap. Families come in all shapes and sizes, and every one of them is beautiful." 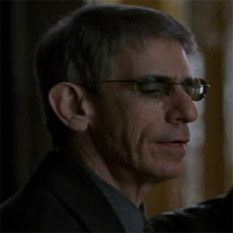 "Yeah that's what my ex-wife said before she slept with my partner."

"He's turning in some crime scene pictures as his photography final, I'm trying to piece together a rape using poorly lit shots of cannelloni noodles."

"Isn't your nephew pushing 300 lbs.? Do you think letting him turn in a 4500 calorie art project is really gonna win him any more friends?" asked Munch.

"Dex is comfortable with who he is because he realizes that what's inside is more important than what's outside."

"Are we talking about cholesterol now?" John Munch's daily exposure to society's most heinous crimes and criminals, combined with his string of failed marriages, had left him with no shortage of pithy, bitter quips. Unfortunately, it had also created within him a profound deficit of compassion and humanity. Deep inside, he really was worried about the health of his co-worker's family member, but sometimes people don't know how to say what they really mean. Olvia understood though, because let's face it women are just naturals at that stuff. "Detective Tutuola and I will set up a perimeter. No amount of Crisco is gonna let that little butterball slide out of our grip."

Before she could object to his idiotic grandstanding, Munch was rooting through the trunk of his vehicle for crime scene tape and Fin had already radio'd for a K-9 Unit. What a couple of overgrown kids, she thought, smiling matronly. They can be a little overzealous sometimes, but it's good to see people who have fun at work, and their antics really are a nice break from all the negativity. She was still smiling her matronly smile while she thought all of that.

8:55am, Outside the Office of Principal Adam Montgomery

"I take it this won't be your first time meeting with him?" asked Stabler.

"Not since my sophomore year, when he suspended me for drinking vodka and throwing up in my geometry teacher's desk drawer." 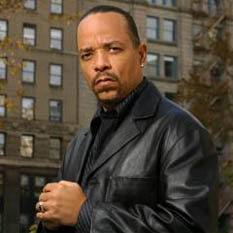 "Rights? You want rights? Okay, your shoulder has the to remain dislocated, punk."

"It looks like even kids who get into a little trouble here and there can grow up to serve their city proudly. The important thing to remember is that lying, to principals or teachers or cops or whoever, only makes things worse. After all, we're all here to help, and we really are just good people doing our jobs the best we can."

The door swung open, and a man in his mid 60s emerged with tired eyes and a forced smile.

"Detective Benson, Detective Stabler, please come in. I have a feeling I can guess why the two of you are here." Principal Montgomery pulled two seats up to his desk and offered the two of them coffee. "Your nephew Dexter was given in school suspension for distributing some very troubling photographs, and this isn't the first such incident. We've been leaving messages for you every night for the past two weeks, but you haven't been returning them. Tell me, what's life like at home for you and Dexter?"

Elliot shifted awkwardly in his seat and then quietly excused himself.

"He mostly keeps to himself. I don't get home until around 10:30 most nights. He's usually in his room unwinding after he finishes his homework."

"Homework? That's not what his grades say." Montgomery slid a printout labeled "Progress Report" across his desk. Olivia glanced briefly at it and recoiled. "Ms. Benson, I'm aware that your family situation is unconventional, but right now you're all the family that he's got. If he can't pull bring these grades up and stop causing problems, I'll have no choice but to expel him. I think the two of you should have a talk." He sent out a page for Dexter, and reclined in his office chair.

Dexter entered the office shortly thereafter, a spitting image of Jack Osborne, if Jack Osborne were about 100 lbs. heavier and slept on a bed of stale, greasy french fries. He gave an exasperated sigh upon seeing Olivia and stood by the door with his arms crossed.

"Dexter, how did you wind up with those pictures?" She asked.

"I swiped 'em off your dumb dresser you blocky old spinster. Can I go back to detention now?"

"Whoa, let's check our vocabulary. Armoire. You swiped them off my armoire, Dexter. And I need them back. They're for work." Olivia's patience was wearing thin.

"Great, the longest conversation we've had in weeks and it doesn't take you three seconds to bring up work." He threw the envelope clumsily on her lap, and a tear beaded down his oily face, creating a kind of gasoline rainbow effect that reminded Olivia of the gutter of a busy street during a storm.

She realized he was right. Here was a kid whose parents had walked out on him. Kids wouldn't talk to him because he smelled like an ashtray full of cat piss. His teachers realized what a lazy dunce he was. He really had no one to talk to. All he needed was a little attention, and she was too busy playing superhero to see what it was doing to him. Sometimes even the best people forget to think about the way their actions affect others.

"Dexter, I'm sorry. I was just trying to get us by. Things are going to change from now on. No more TV dinners. No more talking to my cat and pretending you're not in the room. It's going to get better. Do you want to go to the park and stare at the freak shows?"

A smile crept across his face. He nodded with all his heart and chins.

"And after that, do you want to go watch the fireworks?"

"Okay." He said sheepishly, his smile growing bigger by the second.

"Oh, I'm afraid he's not allowed to leave campus unless he has a medical reason." Said Principal Montgomery. "He will need to stay here for the duration of his punishment."

Olivia struck a sassy pose, with one hand on her hip and the other on her chin. "Hmmm... Tell the nurse he's got..."

"Yes, tell her he's got retarded. Oh, and by the way Adam, I'm drunk right now. Call the cops you leathery killjoy." The two of them stood up and walked out of the office to find Stabler, Munch and Fin waiting for them.

"How did it go?", asked Elliot. Olivia tossed him the pictures and smiled. 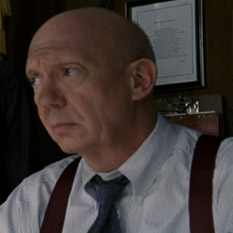 "The IAB has been on my ass since 4:30 this morning. You guys wanna tell me what the hell happened out there?"

"Oh and the principal just tried to sell us cocaine. He's all yours, Fin." The office door was off its hinges before she finished the sentence. As they walked out the front entrance, she overheard Fin yelling "This is gonna be the last face you see when they stick that needle in your arm!"

Olivia's cell phone rang. Cragen. Great, she thought. Dexter rolled his eyes. She flipped it open at a stoplight and answered. "This is Benson."

"Olivia, we need you at the station ASAP. The dismembered body of an unidentified 6 year old girl was found in a padlocked refrigerator by a junkyard worker two hours ago. We've taken statements fr-" She cut him off.

"You can cram it with black cats, Cragen, I'm celebrating the 4th of July with my family."

"Two joggers stumbled upon the severed foot of a local prost-"

She clicked the phone shut, smiled at her nephew, and tousled his hair. The light turned green. Today was going to be a good day.

I can't come up with a clever Daily Dirt headline

So how about you just go fuck yourself instead.