I Got 99 Problems but the Moon Ain't One 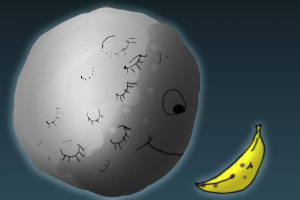 For billions of years the moon stared down at the Earth with smug superiority, knowing it was always just out of reach. The moon was wrong – dead wrong! Soon time spread its legs open and life emerged to begin the long process of covering this humble planet's robust surface. Somehow (probably a magic trick), man appeared. He looked up at the moon and howled. Over the course of thousands of years those howls evolved into a dream. One day, man would rape and kill the moon. Still more time passed and man's knowledge and understanding changed, transforming the moon from enemy to prized destination. Finally, after billions of years sitting idle, the moon had visitors. For a brief few moments out of near-eternity, the moon was actually doing something for a change. It was doing a very poor job supporting life. A blip in a timeline so monumental that no one would ever notice, or the start of a beautiful relationship?

It has been a long time since anyone visited the moon, mostly because there's really nothing there except a substantial collection of rocks and craters. No person or organization has devised the means to make ample use of the moon's resources, nor how to get the means up onto the moon in the first place. I once had this idea to kidnap the immediate families of every major world leader and somehow strand them to the moon in hopes of spurring said leaders to develop a quick means to get there and back. Sadly, this plan is riddled with problems, no matter how noble it sounds. It's up to scientists and engineers to figure it out again, and they seem to be on their way towards doing just that.

As we look back with hindsight, it's easy to see why we don't go the moon anymore. The last two Apollo missions read like terrible public relations stunts devoid of scientific value. There was only so much our scientists could do with lunar rocks or soil samples. We had to do something up there, they figured. They figured wrong. 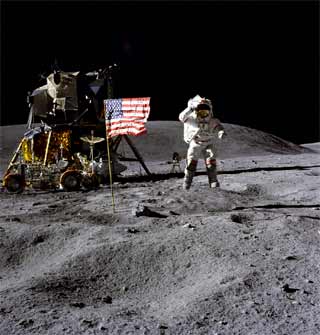 NASA surprised the world when it chose basketball star Kareem Abdul-Jabbar to lead the Apollo 18 mission. The mission perimeters included the erection of a specialized Lunar Hoop, which Abdul-Jabbar would use to score the first basket in the moon's history. At the exact moment he scored the basket, a grand fireworks celebration was scheduled to go off over Washington, D.C., celebrating America's Independence Day in true cosmic fashion. While Abdul-Jabbar worked to assemble the Lunar Hoop, Lunar Module Pilot Joe Grenwalt put as many moon rocks in his pockets as possible, maximizing the scientific potential for this largely symbolic mission.

Unfortunately things did not go as planned. Abdul-Jabbar had no means to practice shooting in reduced gravity, except to use a really light ball filled with helium. This, however, was not an accurate representation of the moon's gravity. His shot went well over and beyond the Lunar Hoop, and there was only room to carry one Lunar Basketball in the Lunar Module. A satellite later picked up the Lunar Basketball's radio signal some 15 miles away from the landing site.

The American public never forgave Abdul-Jabbar for missing that shot, and many argued his actions were treasonous. He eventually received a symbolic Presidential Pardon.

In a last ditch effort to recapture public approval, NASA sent a crew to land on the moon, where they would heroically watch the series finale of "M*A*S*H." This mission turned out to be disastrous, as the population elected to watch "M*A*S*H" firsthand, rather than watch a transmission of the astronauts watching "M*A*S*H" on the moon. As is there were serious technical problems, with transmission errors causing large segments of the 2½-hour program to come through only as static. These technical failings caused Lunar Module Pilot Buck Walcott to lose his temper, leading to him kicking the specially designed Lunar TV and severely damaging it. Walcott regained his composure and he and Commander Tom Gulch worked tirelessly to make repairs. The duo was able to get the Lunar TV operational in time for the beginning of the show's third act.

The situation turned critical when Alan Alda's egomaniacal directing caused Tom Gulch to succumb to space dementia, something mission planners had failed to anticipate. Gulch had to be physically restrained and dragged back to the Lunar Module for an emergency departure, all while he feverously struggled to remove his helmet and expose himself to the moon's inhospitable environment. The Lunar TV played the haunting last moments of "M*A*S*H" to an empty world while the Lunar Module made it's way back into orbit to rendezvous with the Command Module. Command Module Pilot Jack "Baron" MacArthur listened to radio chatter in horror, not sure whether his crewmates would get off the moon alive or whether Hawkeye and Beej got the chance to say goodbye.

Not surprisingly, the whole ordeal gave NASA a black eye. Man never set foot on the moon again. By the time Apollo 19 took place, it had been some time since the last moon landing and people simply were no longer interested. 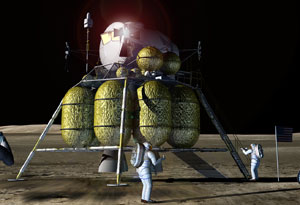 With these horrible mistakes now buried in the past, there is a renewed interest in going back to the moon. While I have my doubts that such missions will actually take place, I am very much excited by the fact that we will be bringing back some exciting new rocks and maybe leaving some multi-million dollar robots to take beautiful pictures of colorful moonscapes that will serve as Windows desktops to the kind of nerds that only listen to movie soundtracks and never any real music. I look forward to being the first idiot to declare "those rocks clearly contain fossils!" by enlarging pictures of certain rocks and running them through Photoshop filters.

If all goes well, American astronauts will be making extended trips to the moon by 2018. The new spacecraft being developed by NASA will allow up to four astronauts to land and hang out on the moon for several days at a time. The plans call for the eventual construction of lunar outposts, where human beings will awkwardly attempt to replicate life on a celestial body that hates life with a passion. There they will undoubtedly gather all sorts of rocks, which they will drill holes into and make scientific conclusions that nobody will ever care anything about. If there work proves fruitful, mining operations will eventually be established, spring-boarding an amazing outer space industry that will slowly tap the commercial potential of infinity like a lustful vampire.

China is making a run for the moon as well, aiming to get either astronauts or robots there by 2010. It's uncertain what the Chinese will be doing on the moon, but it's undoubtedly going to be "shifty" and "suspicious." Sabotage is definitely a possibility. The benefits outweigh the negatives, however, as China's lunar ambitions will no doubt spark NASA's competitive spirit, leading to a space race sure to end with both countries producing some spectacular and tragic explosions to be looped on news networks for however long it takes for another white woman to go missing or do something stupid.

The future for man is as bright as the sun, and likely to end in just as violent a fashion. As an avid proponent of making use of outer space, I can't wait until the day I get to TIVO the next moon landing and watch it later, after all my favorite sitcoms have disappeared into the ethers. I'll never get the chance to leave this planet myself, but I'll be damned sure my children do whether they like it or not.