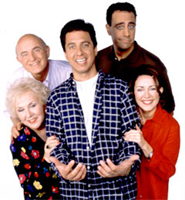 COMEDYMost "comedy" writing on television is just terrible and bland. Here's an example of a typical "King of Queens" joke:

Husband: I can't find my car keys!
Wife: Maybe you should be less forgetful!
Husband: I remembered your birthday last year!
Wife: Yes, but only after I reminded you!
*audience laughs*

To accomplish this noble goal, I've written what the industry calls a "spec script." I sent it out to a bunch of production companies, but for some reason I haven't got any job offers yet. Maybe I mistyped my address or something. Anyway, here's my spec script for "Everybody Loves Raymond," a show that I think I saw part of once:

Everybody Loves Raymond Spec Script
"An Apple a Day..."
By Kevin Bowen

Raymond enters the living room to greet his wife, Debra.

DEBRA: How was your day, dear?

RAYMOND: It was great! I just bought one of these new Apple iPod Nanos! Look at it! It's so small!

DEBRA: Oh great, just what you need! Another small thing in your pants!

RAYMOND: Oh yeah? Uh, well... unlike you, my iPod has 4GB of storage space!

DEBRA: Oooh, you really "owned" me there, Ray. No, but seriously, you're a materialistic, gullible, hipster-scumbag-sap for buying that useless overpriced piece of glossy shit. And why'd you buy ANOTHER iPod when you already have two other revisions?

FRANK: You assholes chatting about iPods?

RAYMOND: We sure are, Grandpa Frank!

FRANK: You know I finally saw something awesome yesterday down at the Apple store.

RAYMOND: Oh yeah, what was that? Those new cinema-sized monitors?

FRANK: No, it was a dead trendwhore! The little emo piece of shit choked to death on his earbud headphones!

ALLY: Dad! Geoffrey posted naked pictures of me again on an Internet forum!

RAYMOND: Geoffrey! What did I tell you about doing that!

Raymond motions for Geoffrey to come closer, then whispers into his ear:

RAYMOND: Don't post naked pictures of your sister online without getting my "admin approval!"

Raymond pats his son on the head.

RAYMOND: Now get the hell out of here before I ban your asses!

The kids run out of the room.

FRANK: I heard today that Microsoft is shipping seven different versions of Windows Vista, their next operating system. I already bought the good version of Vista, though: it's called Linux!

DEBRA: And what's the deal with that new Nintendo Revolution controller? I guess it detects motion, right? I wonder if it will be able to detect me throwing that conceptual disaster into the trash!

FRANK: Hey you know what RSS stands for, don't ya Raymond?

Anyways, that's just a fraction of my awesome script. I'll let you guys know when I get hired by "Two and a Half Men" or whatever.