(Originally printed in the April 12th, 1953 issue of Bold Adventures)

Chapter 42: The Lady And The Tiger 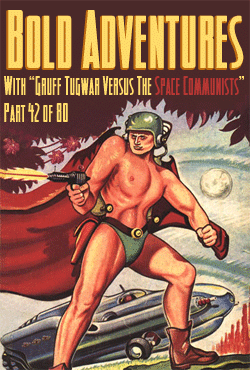 Gruff paced the perimeter of his space-age teflon cell with grim determination. His eyes were flawless blue sapphires in seas of white milk, cool enough to give women goosebumps and sharp enough to slit the throat of an enemy's will.

Three days had passed since the space communists had captured him in the cavernous center of Asteroid X2J-7.

Gruff had traveled to the asteroid to destroy the tyrannic Ursula Ape Wizard with his bare fists, giving his enemy a sporting chance. Gruff's hands were large and strong and deft, like very fast lions but with fingers. The Ursula Ape had been a worthy opponent, but in the end his head had exploded in a mist of gore like all the rest.

The communist jetpack troopers had swooped in as the Ursula Ape's corpse collapsed to the golden floor of the cave, catching Gruff by surprise. A good tactic, to be sure, but it only delayed their deaths by a few moments before Gruff pulled a blaster pistol from the holster slung low on his manly hip. His hipbone was like a metal plate in a newborn baby's head; inviting and devastating all at once.

Gruff would have easily escaped if it hadn't been for the quick-thinking captain of the Oppression 01 starship, who deployed a net around the entire asteroid. Gruff had struggled to break free, his pectoral muscles straining beneath his tanned skin like two slabs of restless marble. Even his golden hair had proven ineffective, despite being perfectly quaffed and conditioned. His only option had been to bide his time as the Oppression 01 towed him to the communist home planet of Spaceplanet, where he would be able to assess the situation and formulate an escape plan.

A robot opened his cell door. It stood nearly eight feet tall and its elongated limbs were bolted to a faded green torso no more than a foot wide.

"Prisoner, please follow this unit." Its words fell on Gruff's pouty ears. They were like miniature lobed atom bombs that adorned his head with mutually assured destruction. "Violence against this unit is not advised. If central core is disabled or destroyed, all doors in this quadrant will close and this unit will disperse poisonous gas."

Gruff followed the robot defiantly, his muscular legs moving with the assuredness of legs that had been walking for years. Each corridor they traversed was identical, with red plastic walls at least a quarter. There was no chance of escape. At least, not yet.

Eventually they came to a hallway that opened up into a brilliant light. As they approached, Gruff didn't see so much as feel the warmth of the UV rays all over his body. His skin was supple and exceedingly proficient at protecting his insides from being burnt by such light. His eyes adjusted as they set foot outside of the tunnels, under the glare of Spaceplanet's seven sons, which were thankfully obstructed by three of the planet's eight rings.

They were in a glass-domed coliseum of sorts, surrounded by hundreds of thousands of space communists. One could almost mistake them for humans if it weren't for the distinctive freckles on their cheeks and the peculiar way they parted their hair. Gruff could feel them staring at his face. It was a good face, almost train-like in its handsomeness and steely resolve.

"Prisoner," boomed the commie king, a burly man with an impressive two parts in his hair. He sat in a guarded throne across from the gate Gruff had come in through. Gruff was surprised to find that the robot had quietly left and closed the tunnel off behind him, but he resisted to lift his dynamic eyebrows. It was best to hide his emotions and keep the enemy guessing.

"Prisoner, you stand before us a captive of the communist empire to stand trial for the numerous craniums you have smashed open like so many space watermelons. You are a violent and savage man, but we are a just and fair people. Before you lie two doors, each standing between you and a creature from your home planet. Choosing one door will unleash a starved tiger, and the other will free a beautiful woman. You'll find that your bothersome blaster pistols have been confiscated. Your fate is entirely in your hands."

Gruff considered the doors. His nipples were like two silver dollar pancakes made of actual silver in a syrup of sweat.

The door on his left had a large porthole through which he could see a tiger pacing back and forth. A frightened girl of no more than eighteen looked back at him through the porthole of the door on his right. Which to choose... The tiger would be a difficult fight without his blaster...

"I choose the door to my right," Gruff said. His throat was like a boa constrictor that had been turned inside out, a mass of muscle and mystery.

"Very well," replied the king as a guard opened the door. The crowd booed in disappointment. "You have chosen wisely. You are free to lea-"

Before the king could finish, Gruff was in the air, his fist pulled back. He came down on the lady with full force, spraying the contents of her head on the dusty floor of the arena in one punch. Rising to his well-proportioned feet, he cried out in sorrow.

"How could you monsters force me to make such a decision?!"

The king opened his mouth, but found no reply.

"Looks like the last laugh is on you," Gruff continued. "Your goons might have taken my blasters, but they neglected to take my teleporter!" He produced a small metallic disc from his belt and held it up, his bulging forearm resembling a sock full of batteries with plenty of juice in them.

With the press of a finger, Gruff blinked out of the arena.

To be continued next week in Gruff Tugwar Versus The Space Communists Part 43: Condition Critical!