Developers learned quickly that part of GTA's charm was its humorous take on American culture through the various radio stations, billboards strewn throughout the game world, and right down to the things NPCs say on the street. They also learned that you should probably spend more than a couple hours designing it.

Activision seemed to think that you could slap together a poorly built recreation of some American city with the help of Mapquest and sprinkle in a bunch of hip-hop tracks and you've got yourself a hit. And what a hit it was, which once again proves what we already know, people who play video games are really, really, really dumb.

With the success of the clones more developers started releasing their own little take on the stealing cars and shooting bustas formula, each one more awful than the ones that preceded it. It was then that Vivendi Universal said, "Hey, let's show those punks how awful a GTA clone can really be!" and 50 Cent: Bulletproof was born.

Its failure was the beginning of the realization that maybe releasing GTA clones programmed in a single weekend, two if you're working on the PS3, wasn't the way to go. While the game wasn't a commercial or critical success, it succeeded in the one area rapper 50 Cent cares about the most, making Earth a less pleasant place to live.

And Then There Were Two 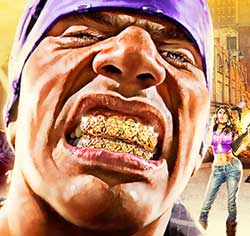 Here's a piece of concept art I found in the Games forum from Saints Row 2. It's nice to see a game finally feature women with tumorous growths on their asses in a leading role.It took roughly half a decade after Grand Theft Auto III was released for a game developer to release a GTA clone that was actually as good, if not better, than Rockstar's series. If it were bound by some kind of academic honesty policy Saints Row would have been expelled a long time ago. While few people weren't aware of the fact that Volition basically ripped off the Grand Theft Auto formula right down to the button you use to steal the car, nobody cared because it let you restart the goddamn mission right after you died.

Gone were the days when you had to walk all the way from the hospital right back to the guy who gave you the mission. We gamers are very busy what with all the women we have to have sex with now that we've learned to pretend how to play the guitar. It was the only real thing Saints Row did differently than GTA and I was about ready to name it game of the year, if not the greatest game ever made.

The typical cut scene went something to the effect of, "Yo, bitch, we gots to blow up them Westside Rollaz, bitch." "I know, nigga. We mad ballin' with the Saints, nigga." "Nigga, bitch, nigga, representin' for Stilwater, nigga bitch." "Nigga nigga nigga nigga nigga press A nigga", all spoken by Michael Rappaport, King of the Wiggers. Could THQ not afford to hire an actor to star in their video game?