Jason Bourne returns, but not really, in The Bourne Legacy, which is reviewed by our own mysterious government experiment Sean "Keanu Grieves" Hanson. Following that, we have Joseph "Jay Dub" Wade with The Campaign, pitting Will Ferrel and Zach Galifianakis against each other as hopeless politicians. Then we have a little treat for you in the form of something we like to call "The Subtext Game." More on that later.

EXPECTATIONS: With Paul Greengrass and Matt Damon stepping aside to make way for long-serving Bourne writer Tony Gilroy to take on the directing role and Jeremy Renner to become the new Bourne or Bourne-like figure, I'm pretty nonplussed. Gilroy did direct the brilliant Michael Clayton; however, he's never handled action before. Renner's a solid actor when he's essaying psychos or the mildly disturbed, but his turns in Mission: Impossible: Ghost Protocol and The Avengers were baffling: Which stuffed shirt thought he would make a good action star? Based on the evidence, The Bourne Legacy has about an equal chance of sucking and not sucking. I'm hoping for "not sucking" - I've seen enough bad movies in 2012 to last a lifetime - but my gut's telling me "sucking" is the right call. 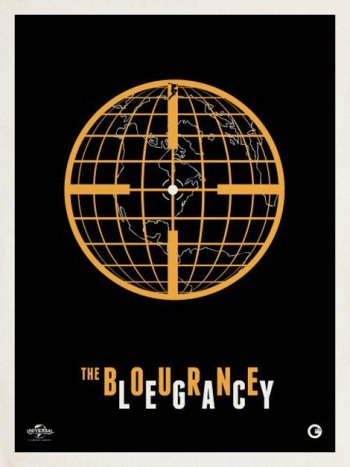 The Bloeugrancey!?REALITY: WHERE DA ACTION AT???

That's what my inner child was screaming through most of The Bourne Legacy, the narrative of which runs parallel with The Bourne Ultimatum while doing little to advance the overall narrative of the franchise. Its story - boy meets girl, boy kidnaps girl for a whirlwind adventure through exotic locales, girl realizes she likes the adventure despite boy's bizarre fetishes for knives and golden showers - is eerily reminiscent of The Bourne Identity. Also, the first third of The Bourne Legacy, with super-soldier Aaron Cross (Renner, bearded, looking like a young Liam Neeson) wrestling wolves and proving to the audience that his bad-assery equals that of Jason Bourne, proves reminiscent of both The Grey and Hanna.

If being derivative were The Bourne Legacy's only flaw, I'd give it a pass. After all, James Bond has been playing variations on a theme through 23 movies since 1962. So, while originality is appreciated, it's not quite necessary in a spy film franchise that, as Roger Ebert observed, merely acts as a vehicle for virtuoso action sequences.

Absent much action, Gilroy doesn't seem interested in exploring his strengths: stark dialogue and tense situations. Maybe Gilroy's tired, but the CIA "intrigue" smacks of a failed television pilot, and the only tense situation (a workplace shooting) happens to be the film's best sequence. My best guess is Gilroy's out of index cards in his "cool shit I can do with a living weapon" box and now he's reheating the leftovers.

I've avoided providing a detailed plot synopsis because The Bourne Legacy is so damned convoluted, but here's the short version: Whereas Bourne and the other Operation Treadstone operatives became superheroes through good old-fashioned training and brainwashing, Cross and his fellow Operation Outcome operatives become superheroes by doing hard drugs in the wilderness. (Meanwhile, my friends drop acid in the woods and still haven't developed anything but the munchies.) 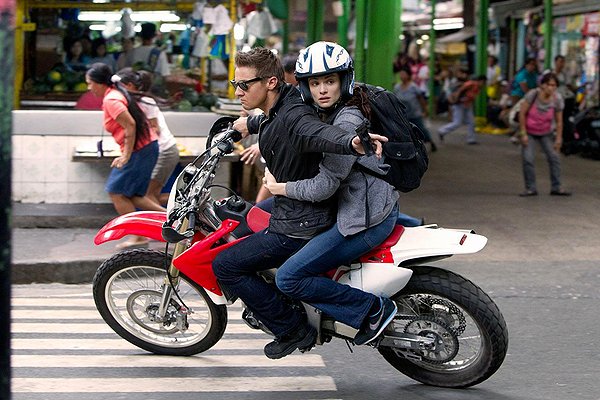 You're not holding the gun properly. I mean, I know you're the super spy and everything and you're driving a motorcycle at the same time, but you're not going to shoot anyone like that.

Anyway, after Senate committee hearings on Treadstone and Operation Blackbriar go south, the CIA decides to shut Outcome down, which essentially means executing Cross, eight other operatives and the doctors who developed the chems. Of course, Cross and Shearing survive and, through a narrative contrivance that's never quite explained, Cross shows up at her house just in time to save her from the second attempt on her life and winds up dragging her whiny ass to the Philippines so he can score more smart drugs because he remembers what it's like being stupid. No, I'm not making this up, and when you contrast this with the relative simplicity of The Bourne Identity, you can see exactly how dense plotting and light sci-fi can weigh a spy film down.

And that's the short version.

In The Bourne Identity, Bourne's sidekick was a German chick with an immigration problem whose sole functions were to react with horror to the crazy shit happening around her and to be someone with whom Bourne could fall in love. That's an important distinction to make: The Bourne Identity was Bourne's story (obviously) and Marie (Franka Potente) was just along for the ride, defined only in relation to Bourne and given no definition of her own. When she's killed in The Bourne Supremacy, as Something Awful forums user DNS pointed out to me, it serves only to drive Bourne's brooding. Ten years later, Gilroy still can't write female characters. Here, Cross is saddled with Dr. Marta Shearing (Rachel Weisz, who's so damn under-used she receives twelfth billing on IMDb, behind "CNN Reporter" and "MSNBC Man Analyst"). 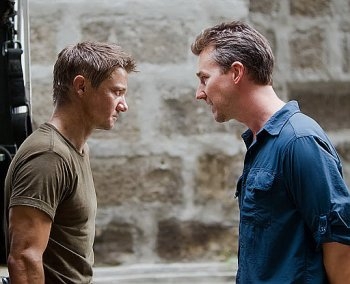 Only one of them was foolish enough to appear in The Avengers.Shearing exists only to spout what I presume is pseudoscience about rewriting the genetic code of Cross's uterine lining or whatever. Like most audience members, I can't differentiate between bullshit doctor babble and the real thing because I'm sitting in a darkened theater instead of a Johns Hopkins lecture hall, so Gilroy peppers the technical talk with ridiculously simplistic dialogue to sum up her role for us mouth-breathers in the cheap seats: "I know my job, which is science. ... I was there for the science. We were all there for the science." That's an exact quote and easily the laziest goddamn screenwriting since Leonardo DiCaprio began every third line of Inception with "So, let me ask you a question..."

After that "science" bit, as government agents close in on her house, Cross essentially tells that uppity doctor bitch to shut the fuck up and follow his lead - in this post-Salt, post-Haywire world of female-centric action thrillers, The Bourne Legacy, in which a scientist must subjugate herself to a drug-addicted thug because she's too helpless to do anything outside of a lab, feels a bit like a dinosaur. She should be calling on A&E to stage an intervention, not buying him a plane ticket on Manila Airlines to get him more drugs, but just like Marie existed only for Bourne, Shearing exists only for Cross.

Cross gets the drugs and the girl - a simplistic resolution to a plot that's so far from simple. The Bourne Legacy is the longest film in the franchise and also the film with the fewest action sequences; I counted one big action set piece and a handful of smaller ones, which means you might see Cross do something cool once every 20 minutes or so. The rest of the film's running time is spent with Edward Norton and Stacy Keach, the CIA suits who speak with great intensity about matters that seem increasingly ridiculous and who don't even realize Cross is still alive until the 100-minute mark. Cat-and-mouse isn't much fun when the mouse successfully plays dead and the cat paces restlessly in the attic for two-thirds of a movie.

MINORITY REPORT: Jeremy Renner just seems to have popped up from nowhere and is currently appearing in every major action-movie franchise, including ones that have already been running for years. Who is he? Where did he come from? I suspect a conspiracy fit for a Robert Ludlum rip-off novel. The Renner Conundrum, perhaps? Gonna start writing that right now. - Ian "Professor Clumsy" Maddison