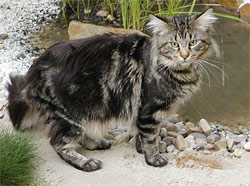 Catfacts.org says Maine Coons are "total retards" and warns owners that they "might forget to breathe". I have a very fat and imperious Maine Coon cat named, creatively, Coonie. Aside from his infrequent episodes of playfulness, Coonie is a loafing lump of heavy-lidded weariness whose immense fluffy body spills over every chair and perch. I have no doubt that if he could speak he would speak with the bored exasperation of an upper-class Briton witnessing a break dancing competition.

Sometimes I even talk to Coonie. When I do he tends to slowly turn in my direction as I repeat his name six or seven times. I ask him questions and search for some sort of reaction in his animal face. His eyes might narrow or he might twitch his whiskers. I tell him to follow me, I gesture with my hands, and he sits and stares at me like I might be insane. This sort of conversation usually ends with me picking him up - a clawed bagpipe filled with cement and covered in mismatched wigs - and carrying him to wherever I am going.

The explanation for all of this nonsense is that I often forget Coonie is stupid. It's a common illness for all pet owners. We talk to them even though we rationally know that our cats and dogs and birds and fish are basically as smart as different varieties of plants. A cat might be a particularly clever carrot and a fish a dimwitted beet, but these fine distinctions ignore the forest for the trees.

Sure, you hear stories about a brave dog dragging a boy from a lake or a ferret in a burning house waking its owners with its frenzied, well, whatever sort of bestial chirruping a ferret makes. The media is all too happy to lap up this nonsense about dogs and cats and ferrets being heroes. They overlook illuminating details like the boy rescued from the lake had a chew toy in his pocket or the ferret fire marshal was screeching because it was trapped inside a burning building.

My low opinion of pets is not spiteful. I love my cat, and as I confessed I sometimes think of him as a tiny man with excrement tangled up in his ass hair that I have to cut out with a pair of scissors. That is an act, I might add, that I would never do for an actual tiny man. But a lifetime of experience has demonstrated to me that we constantly overestimate our pets. We give them far too much credit and sometimes we both suffer for this generous appraisal.

My entre to the world of dumb animals came when I was about six years old. I had a pet box turtle named Rambo. He lived in a spacious pen in the backyard marked off with some decorative fencing that could only conceivably serve as an obstacle to an animal as awkward as a turtle. He ate berries, lettuce, tomatoes, eggs, and night crawlers. 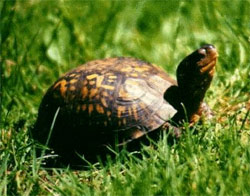 Dumb hater.One day I was playing in the backyard and I had the urge to pee. Being all of six the idea of going back into the house to urinate seemed dull, so without thinking I galloped off to the nearest tree and began to relieve myself. It was only as I was emptying my bladder that I realized I had chosen the tree closest to Rambo's demesnes. It wasn't so close that my urine would contaminate his habitat, but it was close enough that the crafty box turtle was able to crane his leathery neck and look up at me.

For some reason even at that age Rambo's scrutiny felt humiliating. It was as if I had been caught by the turtle and he was looking at me scornfully with his beady little eyes. He was silently accusing me of public urination. I hurried away, guilty about doing something bad in the presence of my extremely judgmental turtle.

I began to feel angry towards Rambo. Who was he to judge me on the subject of urination? Most of the time when someone picked him up he peed. He was basically a leaky army canteen that I had to frequently refill with nightcrawlers bought by the dozen from a creepy guy who smoked cigarettes through a tracheotomy hole.

Not long after that incident Rambo disappeared. For a while I wondered what happened to him. Had he managed to escape? Was Rambo stolen by some neighborhood turtle-jackers? Did a ravenous eagle swoop down and snatch him up?

Months later, with winter approaching, I made a grisly discovery that answered those questions and spoke to Rambo's intelligence.

I was poking along the wooden fence that separated my family's yard from our next door neighbor's when the stick I was using hit a rock. The rock was barely visible from the weeds clinging to the edge of the fence, but it did not dislodge itself when I prodded it with the stick. It was wedged in the narrow space between the bottom of the fence and the ground. I knelt down in the grass and discovered the fate of Rambo the turtle.

The poor bastard had escaped from his pen only to be imprisoned beneath the wooden fence by an unlucky coincidence of clearance. There was little left of him inside the shell, although being seven by then I did not take long to stare into the stinking skeletonized interior of my idiot turtle's shell. The nature of his terrible fate caused me to question the earlier incident that opened the sad rift between me and poor Rambo.