Erase the Dark, submitted by Squizz. If it’s from the “Women Student’s Union” and it mentions Jesus in the same sentence as pornography you can bet it is not going to be something fun. It’s probably the reverse of whatever fun is. Like a carnival that’s on fire or being stabbed in the heart while watching your favorite movie.

Even their tag line of “look at how you look at her” says volumes about their joy-killing sense of victimization. Oh man, that guy is totally raping me with his eyes because he saw some girl huffing dong on Real Sex 34. They want guys to be inept androgynous children who have to ask if their butt is where babies come out the first time they see a girl naked. Not to mention if Jesus factors into your rationale at all you might be one of the people who takes an abstinence oath and then ends up with an anal fissure at 16 because you thought vigorous prayer and body geography would save you from sin. 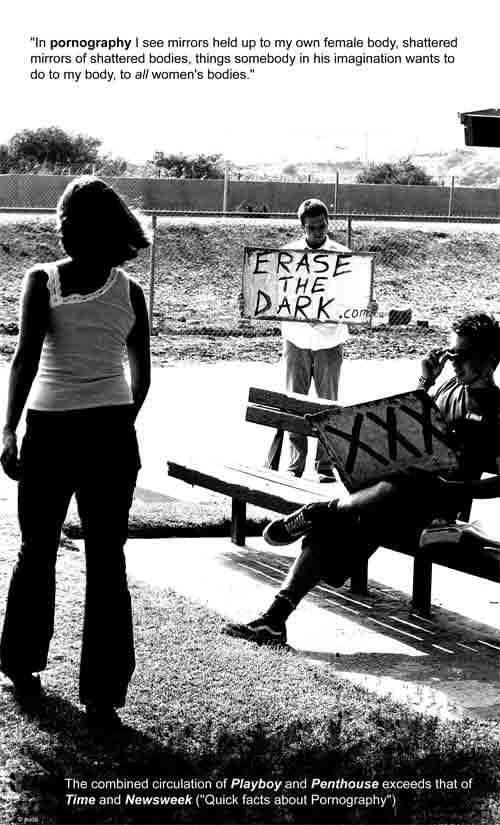 In 2002 Penthouse circulation was at 530,000 and Playboy was at 3,150,000. Time magazine alone has a WEEKLY domestic circulation of approximately 4.5 million with upwards of 5 million including global circulation. Either this poster is lying to me or they’re using some bizarre math to come up with their numbers. Who would have thought that feminists and Jesus would collaborate to lie to me!? And oh man, that dude pulling his sunglasses down his nose to ogle that chick is totally evil. Only the dread grip of pornography would have allowed him to look at her and feel genetic urges to mate.