When There Is No Room In Hellgate, The Dead Shall Inhabit The Bargain Bin 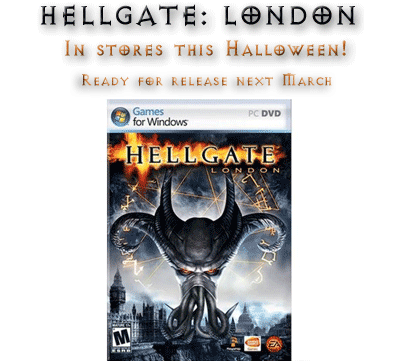 A plethora of bugs and poor design decisions, but lots of potential and good "core gameplay"! Gosh, everyone keeps talking about our "core gameplay"! Can't get enough of that "core gameplay"! What's the secret? We make a few enemies run at the player, then when the player kills them, the enemies fall over and loot pops out onto the floor. We're probably going to win awards for this shit.

Made by the creators of the Diablo series! But please don't compare Hellgate: London to Diablo, because it's not a fair comparison.

Sure, they're both about demons from Hell flooding onto the mortal plane, they both feature randomly generated levels with mobs that drop loot of varying color-coded rarity. Both are split into a small number of acts, with similar cinematics bridging each act. And yeah, the Summoner is basically D2's Necromancer, the Evoker is the Sorceress, the Guardian is the Paladin, the Blademaster is the Barbarian, the Marksman is the Amazon, and the Engineer is a mix between the Necromancer and Amazon (we got a little tired after all that innovation). Both allow you to play with only a handful of other people at once.

But they're totally different. Diablo 2 was a good game, and Hellgate: London offers a subscription model for $9.95 a month. It's like comparing Apples and iMacs. You can't do it.

Eye-gougingEye-popping graphics on a variety of platforms make Hell look better than it ever has before. Those of you lucky enough to have the hardware capable of running DirectX 10 in all its glory will be treated to a cinematic experience like no other. It's like you're playing a cgi movie made in Second Life!

Repetitive tilesets make you feel like you're really trudging through a grueling and depressing battle that never ends. Oooh, spooky!

At LEAST two possible character builds for each class, one of which might actually be viable later on in the game! Which one? Who knows? Maybe Satan. Even spookier!

Vague skill descriptions! Take your Summoner to level 25 and invest one skill point in the "Toxic Elemental" pet with a description that reads: "Does damage". Assuming the skill actually works, how much damage does it do? Is it direct damage or Area Of Effect? Ranged or melee? How often does it attack? How many hit points does the pet have? Do the damage and hit points scale with you as you level?

It is a fun guessing game. For all you know, the elemental could just run away when you summon it, or even attack you. Which brings us to...

No way to get your skill points back. That means you'll be screwing up lots of characters and starting new ones, adding hours upon hours of replayability. Which brings us to...

Limited character slots and inventory space! A great reason to invest $9.99 per month to have us expand them for you. Where does your money go?

We have a programmer sitting in front of a bank of monitors with that crazy green Matrix code that looks like it's raining alphanumeric soup. He hacks around the clock to the best of his ability just to keep your inventory and character slots bigger than they were coded to be. Red alarm lights are constantly going off in there and the room is shaking because he is pushing the mainframe past its specs and the code is ready to firewall at any moment. Frankly, we should be charging you more.

Elite and Nightmare Elite modes, which test your ability to play through the same monotonous game all over again, this time with monsters that take ten times longer to kill. Hell yeah! Or perhaps I should say Hellgate: Yeah! Also, Nightmare Elite is literally impossible to beat at the current level cap of 50. Keep trying, though!

Tons of jokes and wacky dialog from every NPC you come across! None of it's funny, but it also doesn't fit into the rest of the game in any way, shape, or form. Two bad things cancel each other out, right?

Disappearing content and features! In addition to our exciting "unpredict-entory" system that randomly deletes items when you log off, we also remove all of the extra features, items, characters, and content you paid for the very moment you unsubscribe. Even if you just subscribed yesterday. We could give you a full thirty days from the moment you paid, but we'd have to bump the subscription price up to $15 a month to employ someone to do the complex math that would require. Even then, we don't know if our building could withstand another shaking, alarm-filled room.

As you play, you'll notice three icons on the bottom of your screen. These are randomly selected from a table of 16 icons of varying colors, each of which have a different meaning that you must memorize. There are also numbers inside the icons on your screen. Once you're done memorizing the icon system, you must recall which icons mean what and perform the correlating action X number of times, with X being the number in the icon. Upon completing all of this, you will see another icon appear to let you know you did a good job. As a reward for dealing with this obtuse nonsense, you get... a few more pieces of loot.