Smoking Will Kill You and Rape Your Family 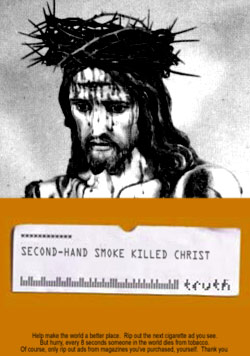 The Truth Hurts Jesus, thanks to Dante Passera for the image.I smoke cigarettes, just shy of chain smoking, and while I recognize the health risks and how horribly disgusting the habit is, I find it extremely enjoyable. I'm sure many smokers and non-smokers have railed long and hard against the idiotic lawsuits brought against the evil tobacco companies. These lawsuits, which in turn have forced the not-evil consumers to pay retarded prices for a product they're addicted to, have generated a lot of revenue for idiotic marketing companies working for the government. Thanks to some crybaby people who got shot down in a blaze of black lung I have to shell out twice as fucking much for my tar fix. So they can drive around in gold-plated Humvees like rap stars millions of American have to slightly decrease their standard of living. So the government can churn out useless anti-smoking spots that try to be hip and painfully are not I have to make the choice "one pack and nicotine fits or two packs and caffeine fits".

No, I'm not kidding, being a "broke ass nigguh" web master means feeling the pinch when you smoke premium cigarettes, and no I'm not switching to JOE SMOKE'S BRAND 100s or EQUATE CIGARETTES. That's like asking a heroin junkie to switch to crack because it's cheaper.

I could ASK FOR YOU TO DONATE MONEY, which I guess I just did, but I feel guilty about it, so don't. No please, don't DONATE MONEY so I can smoke constantly. I mean it, if you DONATE MONEY I will be really mad.

The advertisements being funded by these lawsuits are as ridiculous as almost every public health awareness campaign. I mean these are the hit makers who have brought you such media masterpieces as:

The California Raisins' "Say No to Unprotected Sex Campaign '89"

Driving while intoxicated will make you impotent.

Jerry the Giraffe sez: "Every pill of X you take deforests an acre of rainforest in South America."

Considering how much money is spent on market and demographic studies you would think SOME ad agency would know how to tell people in a cool way not to do something that is fatal. You would think. 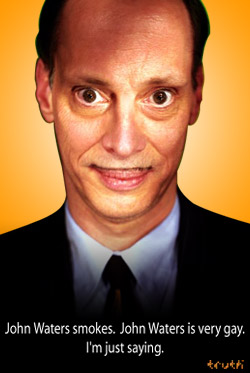 You don't want to make movies with cult followings do you? Quit smoking!Thethruth.com, the jackoffs currently responsible for this no-brainer of a counter-marketing campaign, have really been laying it on thick lately. I'm sure you've seen at least one of their TV spots that features hip 20-somethings heaping body bags in front of tobacco company buildings, or telling people some useless fact that tries to make people think that cigarettes contain urine.

FACT: Cigarettes contain oxygen, there is no oxygen in space so there is no sound in space, and therefore cigarettes are full of sound.

FACT: Cigarettes are cylindrical and so is a homosexual man's erect penis.

FACT: Cigarettes are white, Mr. T was black, but Hannibal was white and Hannibal smoked cigars, which were brown, which technically Mr. T was brown not black. Figure it out.

FACT: An anagram for "cigarettes" is "strategic", if you take out one of the e's.

Now, since there hasn't been a fifty billion dollar lawsuit settlement in the past week they have run out of money because they're encouraging kids to run around and "spread the word", which knowing how militaristic anti-smoking people are probably means chasing smokers around with fucking hatchets. Sure, take away smoking in bars, that's stupid but fine, take away smoking in hospitals, that makes sense, but why do goddamn non-smokers feel the need to come up to you on the street and tell you that it is bad for your health? That's great, the five sugar packets you used in your coffee this morning are bad for your health too, just like that carcinogenic hair-spray you use that they maced rabbits with you fucking cunt! Now back off and let me smoke in peace. But I digress, approaching inoffensive strangers to criticize their habits has more to do with psychological problems than anything else

These anti-smoking ads are essentially attacking fucking consumers, which is all any of this kind of crap amounts to. I mean for Christ's sakes, what other thing but drugs/smoking could they get away with making an ad where the message amounts to "doing this makes you ugly"? Like it's even fucking true. I know when I was 18 and not smoking when I went up to some attractive girl at a party and halfway through a conversation she lit up a cigarette the last thing on my mind was how the smoke bothers my eyes.

Todd Howard and Pete Hines from Bethesda Softworks sat down to have a chat with JeffK about their upcoming roleplaying game "Morrowind". 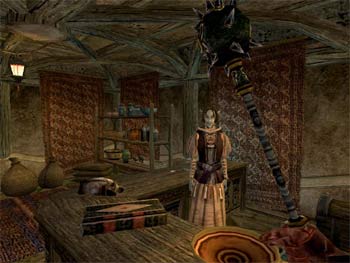 JEFFK: Did yuo know you are one sassy commant away from geting kikced to teh curb? Think about that befor you answar.

The abuse only gets zanier!! Read it you bastards!

Frags and the always hilarious SA Forum Goons have put together yet another Photoshop Phriday, this time in the form of hilarious and helpful Valentines. So if you're looking for the right way to say "I love you" to that special someone this February, look no further!! 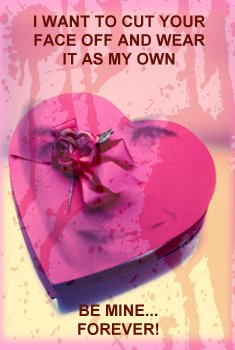 Damn you, go check it out!!