Whenever I need a fresh reminder that America is still insane, I don't turn on the cable news to find out who we are currently bombing or thinking about bombing in the very near future, I just go online and see if the Bradford Exchange is still in business. Until it goes out of business, America will never be truly healthy, and will always be a little creepy and demented.

When trying to comprehend the Bradford Exchange, I am often left with two distinct thoughts. The first is that the Bradford Exchange is the ultimate evil, some giant bubbly horror that reflects all our worst attributes and gives them form. The second is that they are drugged out of their minds and having the best time ever screwing with stupid people. If it were the latter, I would support them in every way possible that didn't actually involve giving them money. If that were indeed the case, their role in the world would boil down to, "how can we get the dumbest fucking people on the planet to pay us to insult them?" There's something mildly noble about that. It's not exactly going to Africa to save dying kids noble, but it's up there.

Unfortunately, it has to be the first. Bradford Exchange is an evil cancer metastasized to the hull of America's glorious prostate. When browsing their site, one should take time to not just look at the products offered, but also read the descriptions. It has the strange tone of a cult marketing indignities to its brainwashed followers. That said, let's take a look at some fine items the Bradford Exchange is selling to its scary, scary customers. 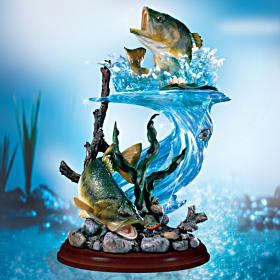 The life of the fish is generally pretty tedious. Most of the time all they do is float in the murky depths and wait to die. Sometimes they see something shiny and rush toward it only to be yanked into the heavens in some grim fish version of the Rapture. But there are those moments, and they are few, where the fish experiences what can only be described as PURE EXHILARATION. You know what I'm talking about - that rare and precious moment when the fish stops and suddenly thinks to itself, "HELL FUCKING YEAH!" Although the glory of that moment mostly transcends human understanding, this sculpture aims to capture it as best as possible by depicting two largemouth bass just tearing shit up. You will thrill as you glimpse it from every angle, seeing these two fish having the best fucking time of their lives, knowing that no matter what happens, they'll always have this one special moment when everything in the water just clicked.

If anybody knows anything about what constitutes pure exhilaration for fish, it would be a company that makes light-up paintings of Jesus and Gandalf battling dragons.

What better way to show your sensitive side than with a deadly weapon. It's like saying, "Hey, I'm sensitive, but not so sensitive that I won't stab you in the gut if you even so much as suggest that I'm gay, because I'm not gay. I just like really gay art."

While I'm an avid opponent of stabbing in general, I would seriously recommend using this knife for any eventual stabbings you might carry out. It just seems appropriate to me that such a poorly conceived symbol of justice be co-opted for the dreadful business of stabbing. If this knife ended up a murder weapon, then it would truly be art.

For some reason this is labeled as a replica. I guess police really do carry these things around, which seems impractical, but I'm never one to question the law. I don't know if the miniature gun on the knife actually fires, or if those little belt pouches the knife is wearing contain any useful crime fighting instruments. I would hope so, otherwise why on earth would they even be there?