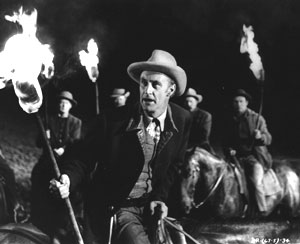 This angry mob has gathered to kill a monster located somewhere off camera!A lot can be said about man and his battle to overcome obstacles. It seems no matter what kind of test snakes up on man, he always finds a solution to deal with the problem. Sometimes the challenge is something simple, like how to get a girlfriend un-pregnant or how to tell the world that dressing up as a moss-covered sloth for sexual purposes is all right and that all of you are just too narrow-minded to understand. However, challenges aren't always simple. Sometimes the challenge is so hard man has to rub heads with another man to come up with a solution. But then other times the challenge is so overwhelming that all the men and even the women of a particular area have to come together and form a mob. The mob is more or less the Voltron of society. Each person, while unique, eventually sheds their individuality to become a faceless part of something greater. The mob is a vehicle for humans to get the job done, no matter what that job is. In most cases, mob formation is intended to help eradicate a threat, scare the holy crotch out of someone, or to build unity by giving many people a united voice, which is then used to spew delicious hate or anti-anti-mob propaganda.

Obviously, eliminating threats is the most common goal of the mob. As safe and secure as we manage to keep our homes, our towns, our bell towers, and our scary church labyrinths, evil still has a way of sneaking up on us and screaming, "boo!" When this happens, civic-minded townsfolk put on their best Sunday mob clothes, grab a torch, and take to the streets in a showing of unity against monster. Of course monsters don't exist, so substitutions have to be made – like minorities or the disabled. But don't get discouraged, as these groups can easily act the part of a scary monster! If the threat isn't killed, then it is usually run out of town like a poor man's Frank Stallone or locked up in a cage for everyone to gawk at like a rich man's Frank Stallone. The point is, the threat is either destroyed or rendered unable to be a threat.

Mobs don't always aim at killing or pacifying the obstacle. Sometimes mobs try to scare people straight or serve as a warning. When someone falls off track in life, people will often form a mob for the purposes of holding an intervention. The intervention signals to the troubled person that they better shape up or they'll soon be on the wrong side of the mob. If a mob can run a Frankenstein or a Dracula (or at least someone who looks kind of like one of those two monsters) out of town, then it sure as Riddly Scott's ghost can do the same for a regular human. Mobs have a way of taking care of their own, but when their own repeatedly fail them, they have no choice but dish out justice. The very same kind of justice TV madman John Walsh threatens against criminals on a weekly basis. 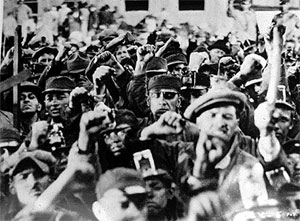 Angry mobs take on many forms. This angry mob even sports a pirate!Perhaps the greatest thing offered by mobs is the unity they bring. Men, women, and children can all come together in unity to fight a common enemy. Unlike past mobs, which tended to feature only people of a certain race, today's mobs are more versatile when it comes to accepting different races. People are more creative about their hatred these days, and no longer cling to such old standards as ethnic purity. Today we have religion and sports team persuasions to divide us! Oh, that and the fear that an anti-Semitic bat-like creature the size of Batman could suddenly take up residence in the nearest bell tower. Mobs also provide a means of meeting new people. Angry mob gatherings allow you to meet all kinds of folks with the same shared interests and hatreds. If being a part of the same angry mob as another person isn't a solid foundation to a lasting friendship, I don't know what is! But then again, my only friends are rocks and sticks that I think look like celebrities. My best friend is a twig that looks exactly like Burt Ward.

It's true that mobs offer a lot! Mobs are the gift that keeps on giving, like a cake made out of smaller cakes or a gun that shoots tiny guns that shoot tiny guns that shoot tiny bullets in the shape of cakes. You can experience these offerings first hand simply by organizing your very own angry mob! It might seem like a logistical nightmare at first, but in reality the best mobs are the ones formed spontaneously based on as little information as possible. I've taken the liberty of preparing a few suggestions to help get you started on the road to forming a brutal, heartless mob:

The best way to form a mob is to get everyone riled. Accuse someone you don't like with a strong presence in the community, such as a teacher or a priest, of being a pedophile or murderer. Don't bother to collect evidence, simply whip the people into a savage frenzy and GO! GO! GO!

When facts are involved, the mob morale and motivation has a tendency to deteriorate. Keep things simple and leave the facts out. Make the issue black and white, good versus evil. You don't form angry mobs to act as juries!

Whenever possible, choose targets that live inside castles or buildings that utilize gothic architecture. If there is a moat or giant gate or doorway to overcome, this will enhance the mob experience. The mob will enjoy the problem solving challenges of entering the building. Teamwork makes your mob stronger! If your followers find the experience rewarding, they will likely join your mob for later outings.

Bloodlust can be quite a factor, so it is important to keep things in perspective. When you do capture your designated mob target, decide on an appropriate and lasting punishment. A quick execution is likely to prove anti-climatic for mob members who worked hard. A slow, torturous defeat is likely to be more satisfying.

If there are any furries in your community then by all means do the deed.

There are of course other things to keep in mind, but these are the most critical to a good mob outing.

One final thing to make note of is a little something called groupthink. When people get together in a large group, individual ideas tend to get pushed aside in favor of the group mentality. This can enhance the mob experience, but it can also outright deny a lot of great ideas. Encourage your mob members to share any suggestions they have, such as possible scare techniques. However, this is a sensitive issue, as one of the key tenements to forming a mob is the lack of individuality. If people express themselves individually within a mob, then they are more likely to feel morally responsible for the actions of the mob whereas if they blend in they can attribute the actions to the other members. As a mob organizer, it is your duty to play gatekeeper to your members, allowing them just the right amount of self-expression and conformity!

When that day comes a dawning, your mob best not be a yawning! Who else is going to defend your town? YOU ARE THE LAW!