You Can't Spell "Style" Without "Sty"!

I woke up a day or so ago with a slight ache in my lower eyelid region. This is not particularly unusual as the ghosts that inhabit my bedroom have a tendency to hurl wooden blocks into my eye sockets while I'm asleep. I don't know where they get them because I don't have wooden blocks in my bedroom, but somehow from some ghost blockmart they import these things and jam them into my eyes. I shrugged it off, drank my morning caffeine, read the funnies (Kathy got lost in a department store and Haggar was mad at his wife) and sat down in front of the computer to find out who told me to die in an e-mail and what IRC chatroom hates me this week. It turned out to be Hal_OoseN8 and #sweetpickles, but that's not the point of my story.

The point of my story is that as the day worn on my eyelid hurt more and more. Now as you may have guessed from the bone crushingly clever title of my article, it turned out I had a sty, but without a bone crushingly clever title to hint at this fact I was left to discover it through a little detective work. The first step in the trail of evidence was to stand in the bathroom and prod my lower eyelid in the mirror until it turned red. Unlike a video game this failed to cause the word "COMBO" or "+5 COMBO" to float out of my head. While disappointment was running high I was not willing to give up so I sat down on the couch and turned on Comedy Central, which is America's number one source of reliable medical information. Saturday Night Live came on, amazingly enough since it was 3 PM on a Wednesday, and I was treated to a sketch about a fake boy band. It really wasn't very funny, but it was packed to the brim with medical advice, which is exactly what I was seeking.

During one of the songs this fake boy band was performing they said the word "sty". This made me sit up and take notice even though I had very little idea what a sty was. I pondered it; the word rhymed with eye, so there must be some association. I put on my thinking cap - which is my expression for turning on my "Tiger Hand Held Games: Talking Metal Gear" so that it repeatedly plays the opening music and says "Lieutenant, let's put the plan into effect" - and took a stroll down memory lane to see if that turned up anything. I realize now I could have simply gotten up and walked into the other room and looked sty up on the computer, but more on that later!

I had a vague recollection of a friend of my mother's having a sty when I was around six years old. My wavy flashback memory of this event indicated to me that sty was definitely associated with "woman trouble". I was fairly certain that I wasn't a woman, but I wasn't willing to rule out this one lead just yet. If a sty is related to "woman trouble" could I still somehow have a sty? Then it hit me; my failure to grow full and uniform facial hair has frequently been referred to as girlish, so yes, a sty was a distinct possibility.

Suddenly it all came to me! I had a box of Count Chocula cereal in the kitchen and, my sty forgotten, I got up to make a bowl. From the kitchen I could see to my computer and I remembered that I might have a sty, and by God that magical box might have my answers. I immediately opened my browser to sweetpickles-fetish.com and then, struck by why I had initially taken a seat at this digital altar of pure sex, I cruised over to webmd.com and searched for sty.

A sty (external hordeolum) is the most common minor problem of the eyelid. A sty is an inflamed area in the tiny oil glands that surround the base of an eyelash. It begins as a red, tender bump in the base of the eyelash. A sty usually comes to a head in about 3 days, then it breaks open and drains, and it heals in about a week. 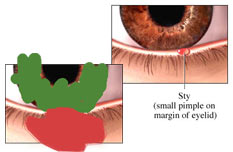 WebMD's sty rendition along with my personal sty rendition.Accompanying this extremely accurate sounding bit of text was a picture that completely contradicted it. You will note it to the right or left of this paragraph depending on how I ended up aligning the text when I pasted it out of Word and into my Interweb editing software. If I had to guess I would say it's to the right, but I'm not very good at guessing. Now you can see from this picture that either WebMD mixed up their pictures or their idea of a pimple is a glass bead sticking to your eyelid. For comparison I have included my much more accurate rendition of my own condition, also changing the eye color to match my own. You will note that I did not have any glass beads stuck to my eye.

While a picture may be worth a thousand words, try handing in a sheet of paper in a photography class with the word "NIGGER" printed on it 1,000 times. You will not get a good grade and I blame racism. No, I discounted the drawing and decided based on the text alone that I did have a sty after all. But the mystery was not yet completely solved! I had found the body underneath the floorboards, but I had yet to find the dastard that placed it there. Turning once again to the wise but poorly illustrated WebMD I perused the potential causes of a sty. There were two.

Either of these could be the culprit, so once more I took a stroll down memory lane with my thinking cap on. Soothed by the sage advice "You've got key card number one" and my fond memories of that morning's "Haggar the Horrible" I decided to produce a comic strip which would detail the likeliest potential causal factor in the development of this blemish.

This seems to be the probable scenario, but another does exist. Every night at bed time I stumble tired into the bathroom and remove my contacts. This involves pulling said contacts from my eyes, inserting the contacts into my contact case, and filling each chamber of the case with contact solution. Normally when doing this I will remove both contacts and place them in the case before adding any solution. Without my contacts in I am as blind as a bat, which means there is a chance, however infinitesimal, that I fill the case with something other than saline solution. When I awoke the morning of my sty onslaught there were a few potential causes lurking in my bathroom.

Ruptured can of peaches

Roommate's saline bottle which I inserted into a mule's rectum

A bucket of clams I caught in Georgia in 1995

A condom I used to wipe up the canned peaches when they ruptured (may have been used before, I didn't notice)

This is what's normally in the bathroom, but what wasn't normal in the equation was that a lot of the slugs were dead too. Those slugs really brighten up that bathroom, tie it together, you know, but beyond that they serve as a canary in the mines. When they start to get sick or they look like they're having trouble in the environment, I start to worry about our safety and I consider cleaning up the bathroom. Then I trick myself into thinking I cleaned it last and that it's my roommate's turn to clean it. This is how slugs get hurt people, heed my warning, this is how you end up with an infected eyelash gland!

NEXT WEEK ON STY PATROL: Zack's sty has ripened and drained, much as the sweetest grapes of the Nappa Valley, but Veronica still will not go with him to meet Lance at the airport. Frustrated, he goes alone, but Lance has an agenda that Zack isn't expecting, and he works for Zack's spurned lover Lydia. Also in next week's "Sty Patrol"; that cunt Scotty D gets run over by one of those trucks that carries cars, and the trunks of those cars are full of model cars, and the trunks of the model cars are full of Legos. Livestock is still in a coma and the part of Rich "Lowtax" Kyanka will be played by the ghost of Herve Villechaize trapped inside one of those ghost traps that someone has glued google eyes and a foam-ball nose to in a crafts class for the elderly.

As usual, the hipsters and Huckleberrys of the Something Awful Forums have utilized their talents in an unproductive and childish manner. And as usual, we're posing those results for you, the viewer! This week is something of an unofficial sequel to the Historical Inaccuracies Photoshop Phriday of yesteryear. Get ready for What Really Happened! Here's what we like to call a preview: