As of late I find myself increasingly bombarded with news of my impending death. The world is heating up to a crisp, conflicts continue to intensify in the Middle East, and myriad forms of internal decay are consuming our nation from within. If those evil forces don't get me then the giant, all-consuming volcano Mount Rainier will go off and destroy my habitat while offshore earthquakes send tsunamis rushing towards me. Because the general consensus is that I will either be turned into bacon by extreme heat or killed in some gruesome fashion, I find myself a bit glum. What's there to forward to? What sparks of joy are there to light the darkness that grows ever stronger with each passing day?

Right now, sad though it may seem, the only thing keeping me from hammering a handful of bullets into my brain is the knowledge that there are people out there that actually buy things from companies like the Bradford Exchange. In this age of overwhelming gloom, I am extremely comforted to know that whatever future civilization rises from of the ashes of our dead bodies will not find a single dragon shirt or piece of legendry Dale Earnhardt memorabilia in the ruins of my squalid hovel. Somehow, that inspires me to live on as if to say "I have better taste than you so therefore I am better than you." Sure they'll find all sorts of incriminating evidence that I lived a miserable life centered on a big electric box that shot pictures and words at my face, but that's kind of romantic when you really think about it.

I have done two updates on the Bradford Exchange's horrible merchandise in the past, but this week I am turning the spotlight on a similar but wholly different offender of basic human decency. This week I will shine the spotlight on a handful of items from a website called "What on Earth," a catalog of crap hellbent on being as stupid and unfunny as is allowed by the laws governing our humble universe. I "shine" the spotlight in the sense you might use a mirror to reflect sunlight onto a vampire. That is, I seek to destroy it.

They say that necessity is the mother of invention. In short, for an invention to succeed it has to fill a need. Whatever needs that mandated the crap sold on this site are not natural needs, such as the need to eat or socialize, but rather cruel and unnatural needs that seek to turn the tide in our ongoing evolution towards super floating brain status. These are wants that seek to devolve humanity by replacing quality brain matter with the same base elemental stew from which we once rose, shepherding us backwards down a dark and troubled path. Perhaps it will be unnecessary and stupid merchandise such as what is sold here and not war, famine, pestilence and death that finally do us in. Stranger things have happened (I think). 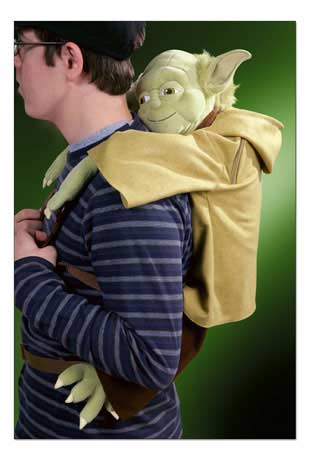 Maroon your child's self-esteem on the swamp world of Dagobah!

Yoda Backpack Buddy
Presenting the ultimate in psychological warfare. Is there a better way to say "fuck you!" to your children than to stick an awful green midget on their backs and send them out in public? Not that I know of! Do not make the same mistake other parents have made, fostering a sense of self-esteem and confidence in their children. No, deny your children the acceptance they deserve from their peers and make them into objects of scorn and ridicule.

Of course George Lucas gets a fair share of the royalties. 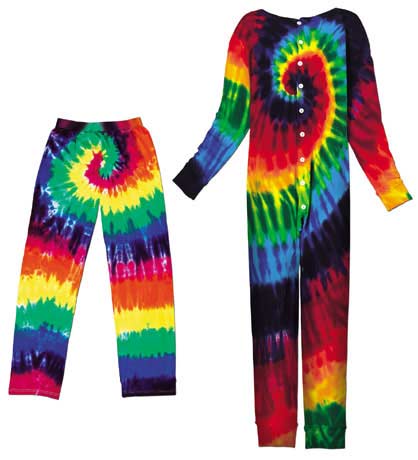 A rainbow attacked and killed my people.

Adult Tie-Dye Pants
Is there a more visually offensive way to be a smelly hippy? I challenge you to find one. I'm pretty sure these were just some ordinary clothes that got turned into a rainbow's autopsy photo after some exceptionally terrifying hippy somehow urinated out an LSD trip in his sleep. Who would wear these? The kind of people that need to be herded into a Nazi-style shower and permanently cleansed of their stink. 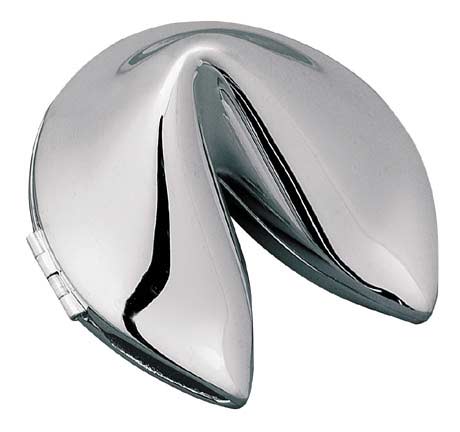 Live in a dystopian future where humanity bypasses the best part of the fortune cookie (the cookie) in favor of metal shells full of data!

Silver Plated Fortune Cookie
If necessity is in fact the mother of invention, then I'm pretty sure this is one of those stillborn babies nobody ever talks about until that one awkward Christmas when dad accidentally lets slip the fact that you were not really supposed to be an only child, naturally causing mom to run into the bathroom and cry for awhile. What possible use could you have for such a ridiculous item? Sure, put little notes in it like the ad says, but has the concept of communication broken down to the level that we must pass notes to each other inside a fake fortune cookie. And what does it say about our race if we are making fake fortune cookies out of precious resources?

OH GOSH IT SURE WOULD BE CUTE TO LEAVE LITTLE NOTES INSIDE AN IRON MAIDEN FORTUNE COOKIE BECAUSE I'M TOO STUPID TO EVEN OPEN MY YOKEL MOUTH ANYMORE. That's what it says, only maybe not in caps. 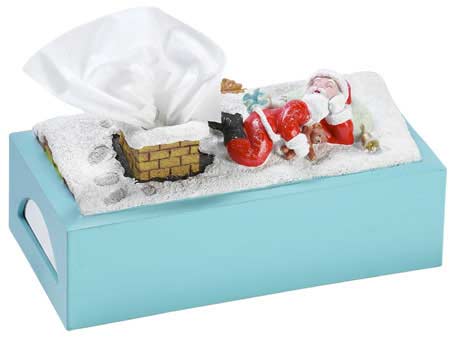 Santa Tissue Box Cover
Look how delighted our friend Santa is, all sassy and loose from a long hard night spent separating the naughty boys from the nice. He's ready to unwind with a cocktail, his favorite teddy bear, and maybe a few special presents from his engorged sack. Never mind the fact that giant white geyser is erupting from that big old nearby shaft, nothing's going to rain on his parade tonight! "Let it rain," says Santa as he opens his mouth to catch a few drops on his tongue. Ring that bell, Old Saint Nick, because the rain isn't going to stop coming anytime soon! 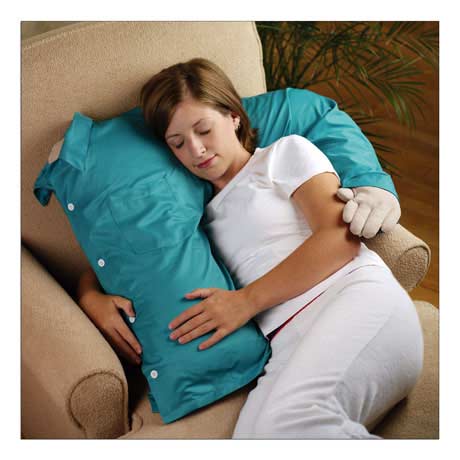 A pillow in a teal shirt tries desperately to reproduce asexually by budding out an arm.

Never curl up on the couch alone again, with this comforting arm that wraps around you as if to say, "I'm sorry work was rotten today," or "No, you pick what we watch tonight," all the stuff you'd never hear from a real boyfriend.

That is from the actual description for this item. If I were to extrapolate from available data what would come next in that description, it would likely be thus:

P.S. YOU ARE A PSYCHO WOMAN IF YOU BUY THIS.

If I were to walk into a lady friend's domicile and find an arm attached to half a torso that she uses for cuddling, I would immediately run away in terror. In much the same way a man having 1/5 of a fake woman to cuddle with would be extremely disturbing and downright perverted, the scenario is no better when gender roles are reversed. In fact, dare I say it's even a little weirder? At least with guys you pretty much know they are capable of high levels of inspired perversion and ingenuity when it comes to combating loneliness. There is simply nothing sane or rational about snuggling up to a chunk of severed muppet. Worse, you couldn't even cheat your way into a high occupancy vehicle lane with this, unless maybe you bought 4 or 5 of them and stitched them together and then stuffed them into an adult tie-dye outfit.

For those of you taking the time to explore What on Earth's catalog, you will no doubt note the absolute worst garbage on the site is the horrid collection of clothing. I did not go in-depth on the clothing because even I have limits to how much I can tolerate before it becomes necessary to pop out my eyeballs with a crowbar and call it a day.