While the nation weighs the pros and cons of legalizing marijuana, AddictedMan.com focuses on the real problem: caffeine addiction. Here's the scoop: Caffeine is an insidious byproduct of the health-industrial complex that is rapidly killing us all. If this comes as news to you, it's because the dastardly Caffeine Barons who control the media have been suppressing the truth for decades:

AddictedMan.com's webmaster "Steweeme" (this is probably him, given that this picture appears on several pages without caption or context) has dedicated his online life to setting the record straight about this dangerous drug. If you're having a bit of trouble understanding his peculiar writing style, that's almost certainly because all the "Caffeine/cRANK/sPEED" you've consumed over the years has warped your mind. To an untainted reader, the site probably looks like a peer-reviewed medical journal.

According to his "About: ---'Me'" page, Steweeme unknowingly suffered under the addiction of caffeine for about 25 years before he got wise and sobered up. Now he has no addictions and "NO-DOCTOR," which makes perfect sense if you're insane (you can't be unhealthy if there's no one to tell you you're unhealthy!). You, on the other hand, are a "'Pathetic', 'Health-Problamatic' ---"WRECK" of a ---'HUMAN-'Dead'-BEING'!!" Incidentally, Steweeme is available for seminars if you'd like to hear this rousing motivational speech in person.

As a "drug specialist," Steweeme undoubtedly spends a lot of time researching, and he's uncovered some pretty startling secrets the medical community has tried to keep under wraps: 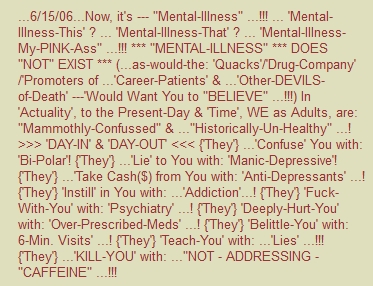 You see, "mental illnesses" and "alcoholism" are actually just side effects of caffeine addiction. Caffeine is the true culprit for literally every problem that exists, from wife-beating to Parkinson's disease to school shootings:

Just imagine the carnage that could've been spared had Eric Harris and Dylan Klebold simply opted for some delicious, fresh-squeezed lemonade instead of toxic cokey-cola!

I'll leave you with Steweeme's "Heaviest-Question-Ever"; it's a real puzzler, but it's worth the hard work, because 'Marriage-to-Me' and 'World-Jet-Set-Travel' are on the line! Presumably the offer still stands: