The Hottest Trends In Computing

My computer recently died a horrible, drawn out death that made me rethink my positions on assisted suicide and assembling computers without using screws. As I skimmed through various hardware websites to research the components for my next system, I came across a number of trends in computing that I had never heard of before. In just one year so much had changed. Dual core processors? Optical mice? It's the future, god damnit, and some of the things that the tech savvy are doing out there are incredible.

Tossing several processors in your computer is all the rage. More processors means more power, and although most multi-cpu motherboards only have room for two chips people are buying many more and cramming them in wherever they'll fit. It's not uncommon to see extra processors taped across pesky ventilation holes, or plopped into dvd drives to make them spin much faster. Some people with low budgets have gotten in on the action, going so far as to snap their current cpus in half so that they can have twice as much power.

It doesn't end with processors, though. There's a technique called SLI that lets you use several video cards at once for faster performance, many people use multiple hard drives and/or dual boot into different operating systems, dual channel RAM works faster if you use two sticks in tandem, and of course there are dual-monitor setups for artists and people who take reading pirated comic books very seriously.

Taking Moore's Law into account, experts have projected that within six months we will all be using two sound cards for 14.2 surround sound, two motherboards, two keyboards, two mice, and zero physics cards. 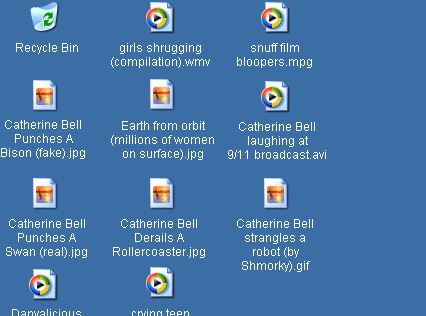 Try it yourself, you'll see!

Enthusiasts have been overclocking their computers for years, going to extraordinary lengths to push their systems past their intended speeds. For these daring souls, the ultimate goal is to have a computer boot and log into a forum as fast as possible, then post the results and breathlessly await the internet's approval. Either that, or to play video games online with the FPS display toggled and constantly ask for everyone else's framerate while they stand still and die.

As the speed increase from overclocking has become increasingly minimal, the culture has changed. Now underclocking is in vogue, and a new breed of system tweakers who call themselves "Extreme Underclockers" are doing all they can to make their top of the line computers perform as horribly as possible.

Sounds kind of lame, right? Wrong. The line between "wow, that's slow" and "wow, I guess it's not even on" is a razor's edge, little man. Those who walk it fear nothing, for their shoes have special razor-proof soles.

An underclocker is considered the best of the best when notepad.exe takes more than an hour to load and his computer is capable of running without a power source.

Distributed computing projects such as Folding and SETI are well-regarded for bringing millions of people together to find a cure for cancer and search for extraterrestrial life, but they do more harm than good. Think about it. Countless computers are left on with the sole purpose of running these applications, consuming massive amounts of energy each day and putting a substantial strain on our resources.

This project is already catching on in cancer research centers and astronomy labs across the world, but it needs all the help it can get.

I've always thought case modding was goofy since almost everyone makes the same case with with slightly different neon lights, but this is one trend I can get behind. It's called "Mock Stock", and the idea is to modify the fuck out of your normal computer case until it looks even more normal and unassuming than when you started. The basic template for a good mock stock mod is:

If you want to get really fancy you can set up an LED panel that displays the message "Nothing interesting going on here", but only advanced modders should attempt anything of the sort without professional supervision and an eye irrigation station nearby.

Microsoft has made a release candidate of their upcoming operating system widely available for testing, and a lot of people who are normally hard to please are so happy with Vista that they are using it as their primary OS. What makes it so great?

For starters, Vista ditches the gaudy interface from XP in favor of a much more elegant "sea urchin" design. Every aspect of the OS has been reworked to incorporate the beauty and the majesty of the sea urchin with your everyday activities. Vista also uses hardware acceleration to power many of its impressive features, such as the Sea Urchin Messenger which will eventually allow you to chat with your friends but currently displays a beautifully rendered sea urchin.

The calculator and calendar have been similarly improved.

Perhaps the biggest improvement in the next installment of Windows is the mouse pointer, which now takes up 85% of the screen and scales with your selected desktop resolution to stay the same relative size. If you want to click something, chances are you won't even have to move your mouse! The advantage this will give you in online games is obvious.

Speaking of games, Microsoft is making many pc titles exclusive to Vista to convince more people to upgrade to the new OS. That may sound sort of sleazy at first, but games developed for Vista can do things that are impossible with the limited and outdated technology in XP. For example, in Halo 2 on Vista you can simultaneously jump, fire, and spin in midair but in Minesweeper on XP I don't think you can jump at all.