From Wikipedia, the free encyclopedia

Albert “Al” Calavicci is a fictional character on the television seriesQuantum Leap. Al, played byDean Stockwell, wasDr. Sam Beckett’sonly consort to the modern world during his travels in theQuantum Leap Accelerator. He is often regarded as one of the most important characters in the artistic development oftelevision. [citation needed] 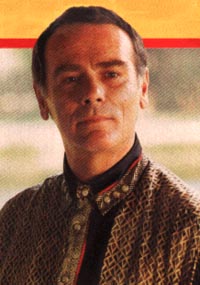 Dean Stockwell as Al Al, one of the key players in the Quantum Leap project, chaperones Dr. Sam Beckett through his “leaps” by explaining where he is, whose body he’s inhabiting, and why he’s there. Al appears to Sam as a hologram, which cannot be seen, heard or touched by anybody but Sam (with some exceptions— explained below). Al is the liaison toZiggy, aNegrobluessinger from the future who guesses, usually inaccurately, what Sam might have to fix in order to leap again.

Al often played the “comic relief” on the show, but he had a serious side that made him more fleshed-out than most television characters. He was portrayed as a hard-drinking, womanizing blowhard who would often make lewd and inappropriate comments about women. He was always quick with a joke to lighten Sam’s mood during difficult leaps, but Al also had a dark side. He was still haunted by the memory of his first wife, Beth, who left him after he was imprisoned in aPOW campfor several years and declared dead. Al had several unsuccessful marriages after his marriage to Beth, but none of them truly fulfilled him or bore him a son.

Al is a man of many passions, and his intense, smoldering sexuality is apparent in his steely gaze. He often smokes a cigar, which is at once a symbol of rugged masculinity and a representation of the male phallus. Many children growing up in the late eighties and early nineties received some of their first sexual feelings while watching Al’s sturdy hands nonchalantly grasp and twirl his cigar, flirtingly darting it in and out of his mouth. [citation needed].

The character of Al is defined by the yearning for love and acceptance, hidden behind a mask of crudeness and callousness. Al served as a beacon to many lonely and confused boys in the world, which is why he continues to dominate the minds of so many young men. [citation needed]

Although Al is a hologram meant only to be visible to Sam, certain characters in past episodes have been able to see or hear Al. Small children can almost always see and hear Al, as can certain animals. In some cases,African Americancharacters are able to see him, but not speak with him.Retardedcharacters are very fond of Al, but it is unknown whether they know he exists. Notable interactions between Al and characters or objects in the past include:

Episodes which do not contain Al

In the entire run of Quantum Leap, which spanned 97 episodes (not including the four that were deemed too outlandish, blasphemous or racist to air), only two episodes did not feature Al. One was “Right Here Right Now,” a 1991 episode which guest-starredMike Edwardsof the dance-pop actJesus Jonesas an intern who temporarily filled in for Al after he broke his tailbone in a giant blender [citation needed]. The other episode was called “The Al Experiment,” but no reliable information about this episode can be obtained, because it was boycotted (and still remains unseen) by all true Al fans, who are the only ones qualified to maintain and update this article.

If Al were a real person, he might now be working in an important position within the government, or more likely, he might have retired. Al was, in the series, aRear Admiralin theUnited States Navy, which would grant him a generous pension. Due to his love of women and flamboyant fashion, Al may have retired to a resort location such asIbizaorCabo San Lucas. Sometimes Al still thinks of Beth, and what might have been. Maybe Al has a cat, although in the episode “The Perverse Obligation” it was stated by Sam that Al does not like cats. I like to think that Al has softened up somewhat in his old age.

Maybe he thinks of me sometimes; maybe he wonders about a world not too different from his own, in which he is merely a fictional character, and all the world knows his name and watches him on television, and somewhere a man, who might be like a son to him in a better world, writes a detailed biography of him for an extremely important website. Sometimes Al puts on his favorite record,Ray Charlessinging “Georgia On My Mind,” and slow-dances with the immaterial shadow of me, his lost son— or lover (much like he famously danced with Beth in the finale of season two, “M.I.A.”). Once in a while, Al thinks about the Quantum Leap accelerator and wonders where Sam is, and he wonders if perhaps he can somehow use the machine to transport himself into my world, where I will wait for him always. [citation needed]