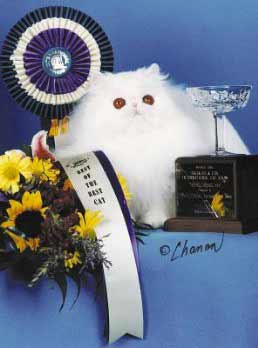 The JonBenet Ramsey of cats

This past weekend I embarked on a magical journey to a land of amazing wonders and startling beasts. This strange realm was not some exotic cave full of Minotaurs or even an emerald paddy field dotted with unicorns. No, it was a cat show taking place in a nearby town. Let me first disclose that I am no cat person. I like dogs and various kinds of reptiles and I have a soft spot for otters and hippos, though I don't personally own any. Cats to me are nice but generally uninteresting creatures, similar to plants but more furry. What drew me to this cat show was the pledge from a friend that cat show people would definitely be worth observing. I have a keen interest in people watching when the people are off-kilter or focused on something terrible, like dressing as anime characters or eating out of a dumpster. Such behavior to me is troubling and unpleasant to watch, but definitely hard to turn away from.

Unfortunately, the cat show was pretty dull, taking place in a small National Guard Armory gym. The venue was filled to the brim with row after row of tables covered with cages and little pins, each one housing some truly sad looking cats. People lined the tables, mostly talking to each other, eating sandwiches, and grooming their feline moneymakers. Occasionally the owners would remove the cats and take them to some nearby cages where a judge would manhandle them and then award them ribbons based on how gracefully they survived the attention. All and all it was completely without glamour and a little depressing. I had such high hopes for a cat show. I imagined cats jumping through burning rings of fire, cats being shot out of cannons, and perhaps even cats fighting to the death in miniature arenas. What I saw was more akin to a series of hospital examinations, only with ribbons being awarded to the least sick patients.

What we had was a gymnasium of people using cats as a jetpack to ascend one of the most ridiculous social ladders ever built. I know most of these people are motivated by love and that the cats are well taken care of, but the whole spectacle just seemed so clinical and macabre that I failed to see anything good in it. It was a bustling showcase of pet eugenics carried out by a wealth of inexplicable people. Indeed, as expected, the people overshadowed the cats.

What follows is a breakdown of these various inexplicable cat show denizens taken from the mental notes I scribbled down on my mental pad and paper with my mental quill pen. Should you desire to enter into the realm of cat shows, this guide will help you find your niche.

Elderly Cat Show Enthusiast
One of the more depressing sights of the cat show circuit is the Elderly Cat Show Enthusiast. She has long since given up the rigorous work of raising competitive cats, or maybe she never even tried and simply found a show that interested her. Instead she goes and watches the other cats and their owners, attempting to grab just a little bit of the warmth and excitement that comes from winning. She takes the cat show circuit seriously and is never far from her notebook full of jotted down scores and awards. When she finally dies, she will leave behind the most horrifying memento ever: a handwritten book of cats and the awards each has received. Some poor child will inherit that book and shiver with dread at the knowledge that grandma was truly insane.

Mullet Man
The Mullet Man is an oddity unlike any other, having traded in his El Camino and monster truck shows for the gentle allure of a snowy Persian and the cat show circuit. He is all attitude and prides himself on putting on a show. He's not there to make friends, he's there to raise some hell and let his cat kick some ass. He spends most of the show arguing with others and butting heads, confident that his opinion will stand above all others. After the show, he and his cat knock back a few beers and then drive home in their timecar to the bizarro 1980s. Because he is one of the more manly creatures attending a cat show, he sticks out like a sore thumb. But then again, he probably sticks out like a sore thumb in all his endeavors.

Paranoid Cat Lady
The paranoid cat lady is the one that looks angrily at you as you observe her precious cat, fearful that you will do something heinous to it like pet it the wrong way or whisper a discouraging comment. She gets agitated when you stand too close, even if you aren't looking at the cat, because she is a territorial beast by nature. In all likelihood, the Paranoid Cat Lady's house and yard is equipped with a serious Vietcong-style defense system to scare away predators. In public situations, however, all she can do is scowl at you with so much rage that her face becomes razor sharp and cuts into the fabric of reality itself.

Feminine Man
The most feminine creature attending these cat shows is undoubtedly the Feminine Man, who somehow outshines a room full of pussy. The Feminine Man is in no way gay, but rather a very sensitive heterosexual male unafraid to rummage through his wife's wardrobe for a lovely flowered blouse to wear that accentuates his delicate mustache. Not surprisingly, he spends most of his time in the corner stroking his cat and smiling some kind of magical smile from another dimension.

Cat Show Patriot
The most fascinating of all cat show archetypes is the Cat Show Patriot. The Cat Show Patriot is adorned in patriotic clothing, such as a T-shirt with a glittery red, white, and blue emblem reading "USA" and a matching red, white, and blue sweater. Or, they might just wear a T-shirt with an eagle on it and the corresponding American flag floating ethereally in the background. They are full of joy and beaming with intensity, for in no nation other than the Great Nation of America could people raise such beautiful cats and enter them in such a glorious contest. NO OTHER NATION ON THIS EARTH. The Cat Show Patriot is a true shining star and perhaps the most garish looking thing frequenting the circuit. 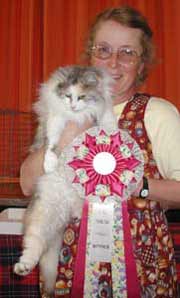 The typical cat show competitor is a standard female, aged 30-60, with no obvious signs of mental illness and a serious desire to breed the most powerful, indestructible cat ever. Standard Cat Ladies come in many shapes and sizes, but they are all generally professional and not crazy. You can differentiate the Standard Cat Lady from the Crazy Cat Lady by comparing the number of cats owned. The Crazy Cat Lady will have between 6-100 living and dead cats at one time, usually all indoors in a small house or trailer. Also, because Crazy Cat Ladies do not breed healthy cats, they typically do not compete in cat shows. That is not to say Standard Cat Ladies are without fault, as they are still quite weird in their own right. That's just one of the bullets you have to bite when you decide to become a "professional pet owner."

Cat Show Judge
Judges sit high atop the cat show food chain, making dreams and nightmares alike come true. They are, in my opinion, quite possibly the most bizarre people alive. I mean honestly, they are judging cats for a living. If I told somebody I wanted to get a job evaluating the worth and quality of cats, I would sound like a raging lunatic. But sure enough there is apparently a career to be had doing such a thing, and sure enough it's full of raging lunatics. I do not mean that in an offensive way, because if you can get paid to hand ribbons to animals, then by God you make the most of it. You're still ear-fuckingly insane for doing it. That said, I'd love to be a hot dog judge.

Granted, I am a bit of neophyte to this new world of cat shows, and unlikely to ever attend another so long as I live. There could be some varieties of cat show attendees I failed to classify or simply missed. Nonetheless, I think my efforts were encompassing enough to give you an accurate representation of the types of crazy bouncing off each other at the typical cat show.

Before I conclude, let me offer some tips to cat show organizers to improve the quality of future events.

Cap off the show by releasing all the cats at once and seeing what happens. A few hundred loose cats running around in a gym is likely to provide at least some entertainment.

Have the cat that comes in last place executed in front of all the other cats to serve as an example.

Desegregate the event and allow other animals to compete, such as raccoons and lobsters.

Make the cats compete in feats of strength and endurance to test the limits of their highly engineered bodies.

Showcase feline intellect by having the cats try to outsmart each other in a dangerous game of cat and mouse (not literally because it would be a bad idea to bring a mouse to a cat show).

Now if I may be so direct: This is the most I have ever written about cats in my entire life and I would like to stop writing about cats immediately.