I'm a College Dropout and I Live With My Dad

I've been living with my dad ever since my mom left to pursue her dream of becoming a nun. The best metaphor for my sheltered existence is that of a womb with internet access. I recently found out that, unlike me, most people my age have to make their own food and do their own laundry. Somehow, this discovery filled me with a feeling that was more akin to disgust than empathy.

Right now you're probably saying "fuck this, I'm not reading some dumb update about Jed's dad!" but it's too late; my dad and I have already injected you with our virus of pure familial love.

When my dad asks me about the website I write for I tell him it's like something F. Scott Fitzgerald would've written in an alternate reality where he was strapped into a machine that constantly showed him stupid websites and bad hip-hop videos. 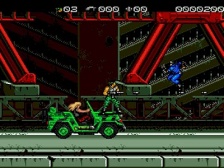 Me being a bad enough dude to save the world from drugs.My dad's girlfriend is a rabid animal rights activist. One of my recent pastimes has been trying to come up with hypothetical situations where animal abuse would be morally justified. "What if there was a serum that would break peoples' addictions to lethal drugs like in Midnight Resistance but it had to be tested on puppies?" I asked her. She responded by throwing a pot of boiling water in my face and running away.

Yesterday I was working on an update when my dad walked into my room. "Aren't you supposed to be at college?" he asked.

"I failed to bond with my roommate during those first crucial seven minutes of trading euphemisms for wanting to fuck the girls in each other's posters. I didn't have any posters and wasn't even at that time aware there were two unique sexes that comprised the human race."

"Well, what do you plan on doing with your life?"

"Whatever this self-help book I bought tells me."

From Self Matters by Dr. Phil, Ph.D.
You have certain core traits, qualities, gifts, talents, needs, and desires. You have a core purpose for being in this world. By suppressing who you were meant and need to be, you are doing something entirely unnatural.

I suddenly knew what my purpose in life was. It was something I had been training for since I was 6. I was put here to defend the earth from space invaders. Unfortunately, my attempts to buy rocketship parts were only met with rudeness from the employee that answered the phone at Radioshack. In response I told him I was mailing him a box of alien facehuggers with nail bombs strapped to their backs so they'd explode when they jumped onto his face. "Your face is going to have so many metal shards embedded in it it'll be considered a cyborg!" I yelled into the phone before realizing that the Radioshack employee had hung up several minutes ago.

I walked into the room where my dad's girlfriend was sitting. "Do you want something?" she asked.

"No. I just need to walk around to get ideas for my Something Awful update. I'm a kinetic learner."

"Well could you walk around in the basement or something? I'm trying to work on my word find book."

I put some hot pockets in the microwave.

"I can't believe you're eating meat. How would you like to be slaughtered for food?"

"I'd be okay with it as long as I got a patriotic funeral followed by a ceremony where naked swimsuit models who had been deprived of food for several days fought each other for pieces my body, getting covered with blood and entrails in the process. Besides, that's pretty hypocritical coming from someone whose clothes are made out of bunnies."

"I have seen the great fields where thousands of bunnies are artificially grown in bio-vats and harvested by mechanical spiders. I've seen them liquefy dead bunnies to nourish the bodies of the living. How long must this madness continue?!?"

I returned to my room where I was visited by my future self. "What's the future like?" I asked.

"Well, I've got some good news and some bad news." my future self replied. "The bad news is that scientists still haven't found a cure for social anxiety disorder. The good news is that they've invented a robot suit that helps me talk to women. First I decide if I want to eject by hitting a button labeled "computer analysis" that actually just gives me more Paxil since the eject mechanism doesn't work. Then I use a digital recreation of Matthew Perry's voice to project a sensitive guy appeal when I tell them I enjoy TLC's slower non-rapping songs and have a forced feminization fetish. Finally, I reveal that I was just kidding about the TLC thing to show I have a sense of humor and don't take myself all seriously like the prudes who made it illegal to wear assless robot pants in public."

"Yeah. Now I've got to get back to the future so I can watch a game show where people risk their lives for money in a bleak social commentary on the state of the media."

"Wait, there's so much more I wanted to ask you! Like why do I sometimes feel like I'm a naked man floating in a stasis tube in some distant future where humans have perfected artificial intelligence but are all dressed like ragged hobos for some reason?"

I marched back into the room where my dad's girlfriend was sitting. "Look, I know there's a lot of tension between us." I said. "Each of us has a closeness to my dad that the other is jealous of. You get to have sex with him and I get his unconditional parental love."

"My point is that both of us want to merge with my dad, to extract his essence and become one with it, possibly through the use of virtual reality gyroscopes and spandex bodysuits. Can't we use that as the basis for a friendship?"

"I guess we could give it a shot."

It's the little things about my dad that I cherish the most, like the way he buys my birthday cards from the 50 and older section of the card shop. I don't take for granted how blessed I am to live with someone who understands my morbid obsession with old age and death.

It Came From the Document with NO TITLE...

Zack "Gee Willikers" Parsons here with the sixth and most action-packed chapter yet of "Untitled Document". If things get any more action-packed we may have to bring along an extra pack just to pack full of all of these actions!

"Chet, this is Cokey Washington." Dale introduced her resignedly.

"I know you," said Cokey, "you're Chet from the news. The guy who always messes up reading the teleprompter."

"Haha," laughed Chet, "got a mouth on that kid. Hey, nice dress by the way, did you loot it from a corpse at a crime scene?"

"No," replied Cokey, "I found it in a dumpster right next to your hot-garbage smellin' breath."

Chet laughed again, but it was strained.

My suggestion is that you go and read Chapter Six as soon as possible!