We here at Something Awful LLC Inc Co Ltd MCI NAACP FBI dot com dot biz dot dot dot are proud to announce an announcement so breathtaking, so earth-shattering, so soul-destroying that once you read it and fully begin to comprehend what we are saying, your mind will collapse in on itself like a fat stupid disgusting pig getting sucked into a black hole. This is a revelation so incredible that if somebody printed it out and gave it to the Pope he would say, "oh gosh!" and you would easily be able to tell he really meant it. Maybe that funny little hat of his would briefly rotate around on his head and fall off. That would be so awesome.

Anyway, on with the announcement. We here at Something Awful aren't content enough to sit around on our collective fat asses and simply write uninteresting articles that nobody anywhere reads or even vaguely considers reading. No, we have decided to start branching out into other forms of media as well, like a nasty computer virus which has infected your refrigerator and causes your icemaker to dispense ads for Viagra and RC model cars which do your taxes and send photos of nude webcam girls to tremendously wealthy Nigerian princes. We'll be releasing our first full-length DVD through Awful Video LLC this summer, and we're proud to take this exciting step into mass media production with the doughy feminine geniuses at Mega64.

COMING THIS SUMMER: A DVD RELEASE OF A BUNCH OF GUYS WHO DRESS UP LIKE VIDEO GAME CHARACTERS AND ANNOY PEOPLE INSIDE FROZEN YOGURT STORES UNTIL THEY EITHER RUN OUT OF VIDEO TAPE OR SOMEBODY CALLS THE POLICE 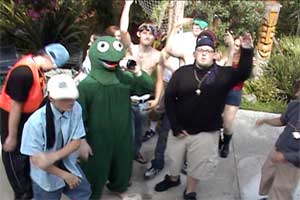 Mega64 is composed primarily of the following three members:

ROCKO: Enjoys dressing up as Kid Icarus so he has an excuse to run around public parks wearing nothing buy a diaper and his well oiled skin.

DEREK: Dresses up as Solid Snake to infiltrate enemy grocery stores, only to be chased out by 60-year old women shopping for beets.

These three unique individuals have composed a two-disc DVD set featuring their greatest Mega64 skits, and we're proud to be the jerks spending the money to produce and distribute this collection of whacked out video game pranking and various tributes to Nintendo pop culture. Want to see grown men running down the street dressed up as Little Mac, intently training for an upcoming bout with King Hippo? Ever dreamed of experiencing the collective chaos of River City Ransom in real life? Wonder what it's like to get inside a large Frogger costume and attempt to cross traffic at busy intersections? Mega64 will answer all these questions and many, many more in their upcoming summer release of "Mega64: Version 1!"

Now some of you may not be convinced that this is the best thing since pickled bread. If that's how you feel, I want you to know that I despise you with ever fibre of my being and I will dedicate the rest of my life to hunting you down and murdering you with my bare hands, or if I'm feeling particularly sexy, my frilly gloved hands. To whet your appetites and give you a proverbial taste of things to come, we are absolutely honored to release a one-minute segment edited from one of their DVD skits. Please get ready for Tetris! 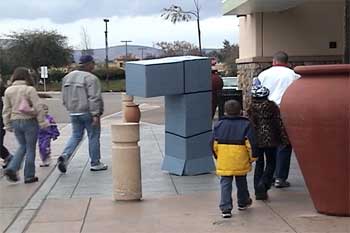 That's correct, they actually built the world-famous L-shaped Tetris block, got inside it, and proceeded to annoy large groups of people in public places. I can't really explain the inherent humor of watching people react to a gigantic blue Tetris piece follow them around the Home Depot parking lot, so maybe you'll just have to see it to believe it. 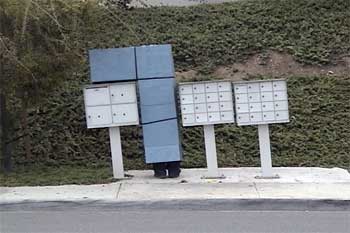 Click here to download the one-minute teaser of the Tetris sketch (12 megs). Once you're done checking that out, feel free to sample a few other clips from the upcoming Mega64 DVD release:

Keep your eyes peeled, as the release date for this DVD incrementally moves closer and closer as each day passes by. Like for example, in one day from now, the DVD release will be one day closer to being released. Trust me on this one, I spent a good six hours doing the math and it all checks out. Grab a copy of the Tetris teaser and prepare yourself for the feelgood hit of the summer: "Mega64 Version 1!"

IS THERE A DOCTOR IN THE HOUSE

Man oh man, my wife had her wisdom teeth out the other day. With how badly she's dealing with it, I say screw that, I'm keeping my damn wisdom teeth in my mouth. For wisdom. Yeah.

Forum Goon paul V1.333 started a thread a little while ago with the following:

"A friend asked me if I could edit out the foot/ski in this picture. I have tried but my photoshop skills are not so great. I had trouble filling in the area left by the ski with trees. So if you have some skill and would like to give it a try I would appreciate the help. Thanks!" The goons got one good look at the picture, and went to work. When they were done, we had stuff like this: I invite you to check out this week's Comedy Goldmine, ""Photoshop Skills Required."