Well, science has done it again. Once again, a scientific breakthrough has occurred which will forever change the history of life on this planet as we know it. Geez, I thought it would at least be another couple weeks before I had to say that again. But you couldn't just leave well enough alone, could you, scientists? This latest scientific achievement is one which mankind has feared since the first hairy ape learned to walk on two legs. By now I'm sure you know what I'm talking about, but I'm just going to come out and say it anyway - scientists in Singapore have bred the world's first bisexual butterfly in captivity. It's true! After years and years of trying and hundreds of thousands of boring old heterosexual butterflies tossed into the incinerator, at last we have the power to once and for all manipulate the sexual orientation of butterflies from straight to flamingly bisexual! Even the alchemists of old, who strived to turn ordinary household lead into ordinary household gold, never dared to attempt an affront to God and nature of this caliber, although they certainly dreamed about it.

Now, the societal implications of this manmade bisexual butterfly are obvious. We're now one step closer to creating a butterfly that only likes other butterflies of the same sex. Once we can finally make butterflies gay, we will at last have a new symbol to associate with gay people. At last, no more will straight people be limited to associating only rainbows, unicorns, pastel colors, triangles, boy bands, chai, and leather pants with homosexuality. Finally, we will be able to label people who like butterflies as gay, too, like we've always wanted! For years, straight men have debated whether or not it was okay to like butterflies and still be manly at the monthly meetings. Soon, the issue will be cleared up. This bisexual butterfly is a major step in the direction of progress in the exciting field of the discriminatory sciences.

As you can see, the bisexual people of the world have chosen as their logo the most confusing symbol in the world. How charmingly appropriate.

So the benefit of the bisexual butterfly to society at large is clear. Straight guys need things to associate with gay guys so that they can go way out of their way to avoid those things at all costs. But what are the scientific benefits of this breakthrough? Why would scientists work so long and so hard to breed a bisexual butterfly? And moreover, why would the taxpayers of Singapore allow their government to spend their hard-earned tax money on supporting this program just so a Papilio Memnon (which translates to the baffling, yet oddly ironic title of "The Great Mormon") could get a little more play? After much research, I have uncovered the following benefits to the pursuit of science:

The dwindling butterfly population of the world will soon rise again as the bisexual.... well... no, I suppose that won't help at all, actually.

Pesticides will soon be unnecessary as we will be able to easily control the insect population through gender confusion.

Finally, the Singaporean scientific community will no longer be known solely for that manmade plague that turned people into flesh-eating zombies.

Other benefits as well.

As you can see, scientists are now working on some sort of human/fish/sushi platter/butterfly hybrid. The future is now.

So as you can see, this may well be the most important biological advancement of our lifetime. Take that, mapping the human genome! And since this wondrous event could be a considered a form of progress, there will naturally be those who oppose it. I can hear the naysayers chanting now. "Don't impose sexual orientation on the Papilio Memnon! Freedom of choice in sexuality for butterflies," they will cry! It's a tough chant to rally around, but after enough hash brownies, those tree-hugging patchouli-pushers can muster a protest around just about anything. It's not even a good argument, when you think about it. I mean, what is bisexuality about if not freedom of choice in sexual partner? All that these scientists want to do, apparently, is show the butterflies of the world that they should not eliminate the opposite sex from their list of potential mates and life partners. Sure, butterflies may not mate for life, but the message is basically the same. You see, hippies? Your argument has no purpose here. It's time for you to drop your picket signs and step aside to let a new breed of super-hippies through. Crazy liberal mentality powers - activate!

Having just completed yet another semester at my beloved small New England liberal arts college, it is my sworn and sacred (in a nondenominational sort of way) duty to find some obscure PC point to argue in any case where sexual orientation is concerned. I'm feeling pumped and ready. Let's do this thing. Okay, this bisexual butterfly is wrong and offensive to the global community because it just enforces the gender binary. For those of you who have not undergone any forced gender sensitivity training lately, the gender binary is that hated and outdated (check out my mad rhymes! I should be a multi-platinum selling rap artist and hip hop clothing designer) notion that a person, animal, or plant is born either male or female. This idea is clearly offensive and discriminatory because it fails to take into account the other genders. Other genders, you say inquisitively because you are an unsensitive, binary-loving gender-bigot? That's right, other genders. You see, a person may be born male or female, it's true, but there are also shades in between that demand acknowledgement. When you use the term "bisexual," the prefix "bi" refers to only two, meaning that you are saying you're only attracted to the two stodgy old "standard" genders. 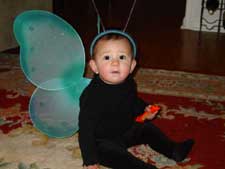 Won't somebody please think of the children? No, seriously. This kid looks like a dork.

Obviously this bigotry that the Singaporean scientists are forcing on their butterflies is an issue that has to be solved. To that end, I plan to use my great influence as an internet writer, my vast wealth, and my disturbing abundance of free time to start a new group. This organization, an offshoot of the other group I founded, ELEAWTA (Eating Lethal and Endangered Animals While They're Alive), will be dedicated to achieving true sexual liberation for all animal-kind. It will be called People for the Elimination of the Gender Binary in Animals, or PEGBA. While much easier to pronounce than ELEAWTA, I somehow suspect that PEGBA will have a much smaller membership, since really the only people who would want to join would be filthy hippies, and I think I scared most of them off from the prospect of working with me when I started ELEAWTA, what with all the beating up and eating animals and all. Nonetheless, PEGBA will fight the good fight, doing its part to ensure that whether it's a queer ocelot, a flexual panda, or a hermaphroditic nymphomaniac dung beetle, all animals will have the right to be attracted to whomever and whatever they choose, regardless of what the scientists say. It's an uphill battle, but I know that PEGBA will be victorious in the end.

Oh Lord, do I need to get away from this school for a while. Thank God for winter break.

Hello friends, Zachary "Ice Cream Jones" Gutierrez here with some whiz bang images of forum posts that appear on other web sites. This week we've collected images from four horrible forums that really have no right to exist. Don't believe me? See for yourself!

If the above image was enough to entice you to read today's feature, please click this link. You may or may not regret it. Either way I'm sleeping good tonight.