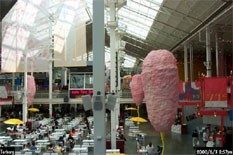 Welcome to my nightmare.My super duper AOL girlfriend Michelle and I went Christmas shopping Thursday at the Woodfield Shopping Center in suburban Chicago. Normally a trip to the mall would not be worthy of reporting on but on this particular occasion I happened to treat things more like a safari than a shopping expedition. With Michelle's keen womanly senses tuned to bargains, I turned my attention to the much more interesting panorama of commerce going on around us. Seeing as how my seed grew roots in small town Ohio my idea of a mall is a barn with two milking machines or possibly a tire fire next to an abandoned tannery. There were malls in Ohio but they generally had as much square footage as an airport coffin hotel in Tokyo that was glued to a Sears or J.C. Penny. The Woodfield Shopping Center was an entirely different experience. It was vast, multi-tiered, and swarming with hundreds or even thousands of frenzied holiday shoppers.

First let me give you some helpful facts about how parking at the Woodfield Shopping Center works. Essentially the parking is shaped like the wide mouth of a funnel and this entire lot funnels into several entrances into Sears. This would not be so bad if Sears ever, in the annals of all of human history, had sold anything worth buying. I think when I was ten I considered buying a pair of British Knights tennis shoes at Sears, although maybe that was the nearly-as-bad J.C. Penny. Regardless, if you seek to enter the Woodfield Shopping Center, be prepared to run the gauntlet of Sears departments designed to entrap you in a maze of walkways so complex you will expect to find a minotaur waiting for you at the dead end near "Junior - Teen" girl's clothes. 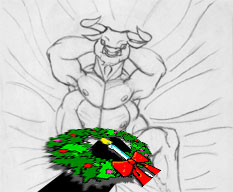 The 4-armed cock-stroking Christmas minotaur thanks you for visiting Sears!Once I had managed to stumble my way through Sears and into the mall proper I gasped a sigh of relief, a deep breath that took in a gust of the perfumed mall air tinged with the artificial aroma of no less than nine candle stores. Unbeknownst to me candles had apparently skyrocketed in popularity not seen since the invention of gas lighting thanks to some new lab-created mixture of caramel, watermelon, and something that claims it is vanilla. In the wake of such a massive scientific discovery the light bulb and electric lamp stores at the Woodfield Shopping Center closed their doors only to be replaced by a series of candle vendors. Just in time to position themselves for your important holiday candle dollars!

Why a mall needs nine candle stores is a mystery as deep and timeless as the episode of Unsolved Mysteries where Robert Stack told me about a guy who was found wandering the desert of New Mexico and needed help identifying himself. Somehow I don't think the right-honorable Mr. Stack will be breaking in with an update on the case of the nine candle stores any time soon. In the mean time if you are in desperate need of a shitload of candles and enjoy spending your money in a market where candle retailers are constantly competing for the next candle technology innovation, then the Woodfield Shopping Center is everywhere you want to be.

Candles weren't the only thing that seems to be big this holiday season, calendars are also bringing in thousands of shoppers looking for the best 16 months of "dogs in uniforms" and "9/11 Never Forget" their money can buy. I was so awed by the wide array of completely worthless imagery attached to calendars this season that my bank card veritably flew from my wallet and emptied my account into the register at "Calendars and Things". There was a calendar there for everyone! Why, they had over 50 varieties of domesticated animals, religious quotations and imagery for every major religion (except Islam of course), dozens of women in bathing suits and hot pants, all painstakingly inserted above a grid of dates! Don't even get me started on the "365 Days of The Farside" because I just might blow some sort of quality overload fuse related to the Roman calendar! 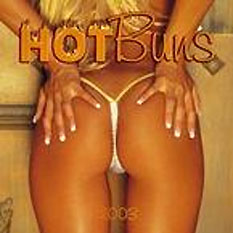 Topping grandma's Christmas wishlist was the Hot Buns 2003 calendar. You can't go THONG with that! HAHAHAHAHkillmeplease!I was so overwhelmed by the number of choices that I walked out of the store more confused than I was when I had walked in. Luckily I had plenty of time to think about which calendars best suited the calendar needs of my loved ones. A little over an hour later on the opposite end of the mall we stopped at THE SAME MOTHERFUCKING CALENDAR STORE! Because holy fucking shit that first one was not jam-packed with enough calendar for me, this mall desperately needed two of the same calendar outlet! When we first saw it I thought we had become trapped in some hideous dimensional vortex that kept resetting us to the calendar store. This perpetual confusing loop is a theory I like to call The Sears-Calendar Postulate, but that scientific work is for another day.

Soon after our first visit to the calendar paradise we headed into the Christmas shop because Michelle has a family that tends to enjoy things like a Santa made entirely out of glass. For whatever reason the random holiday related crap, including a $1200.00 stand-up stuffed Santa Claus dressed in gold finery, was not up to the discerning standards of my beloved and we quickly vacated the premises. The Christmas store was notable for two reasons despite the brevity of our visit. First off, they have a full store, not just one of those kiosks you see in the middle of the mall, devoted to Christmas items. Secondly, while inside the store I noted the beginning of a trend that would haunt me throughout the entire mall excursion. Blaring from the speakers in the Christmas store was Techno House/Trance music that was themed for Christmas. Apparently the owners of the store felt that the rich grandmas coming in to buy life-size Santa Claus effigies dressed like pimps also have a deep love for thumping bass-beats.

Let me set the scene for you. Imagine shelf after shelf filled with ceramic, glass, and porcelain versions of every icon associated with Christmas. Imagine a price associated with these things. Double it, now double that number, then double the resulting number one last time. That's how much everything costs. Then play the following music in your head:

Then leave the store only to discover that every goddamn store in the mall, from Abercrombie and Fitch to that pretzel stand in the food court has techno oozing out of the entrance. Even the sandwich place where we ate lunch was playing techno. That's like walking into an Italian restaurant and hearing Mexican mariachi music coming out of the complimentary mint dish.

Probably my favorite experience during our shopping extravaganza was the wide variety of specialty kiosks scattered around the mall walkways. These kiosks were manned by the most bored looking people, usually talking on cell phones, and were only stocked with the shittiest merchandise you can imagine. How about an inflatable beach ball shaped like the head of failed Starwars bounty hunter Greedo? Maybe you'd like a pacifier with the word THUG written on it, only somehow they managed to misspell the word THUG as THUJ. I see you are a discerning consumer of absolute trinket shit and knockoff Taiwanese gee-gaws. Good news!!! A fresh shipment of Britney Spears holographic barrettes has arrived and they smell like space-aged polymers and the colon of a goat!

You folks think I am exaggerating about how terrible the merchandise was at these kiosks, but I saw one that was a CD kiosk (a bad idea already) with no more than 20 different CDs. Alright, that's dumb, but what made it leave the realm of merely stupid and launch into the orbit of the brilliant star of retardation was the fact that five of those 20 CDs were singles by Ja Rule that could be put side by side to form A NAKED PICTURE OF JA RULE. Fully one quarter of their inventory was devoted to a nude Ja Rule. The only worse thing I've ever seen related to Ja Rule was when Lowtax's dad bought his sister a leather Ja Rule hat that was a steal at only THREE HUNDRED FUCKING DOLLARS.

Roughly three hours after we had arrived, Michelle and I navigated the perilous labyrinth of the Sears and found ourselves in the same square kilometer of parking lot as our car. Our bags laden with a few hundred dollars worth of scented wax melters and ridiculously overprice chocolate we set out for home. Only 19 shopping days left people!

Oh fuck it, you might as well put the barrel of that 12-gauge in your mouth right now.

Hello, Livestock here to let you know that there is a new edition of Photoshop Phriday hot off the presses. Well, not that we actually have presses, but we do press a lot of keys to make this shit happen. This week's theme is "Unlikely Christmas Albums" and has something to do with the fact that Christmas is apparently coming to kill us all. 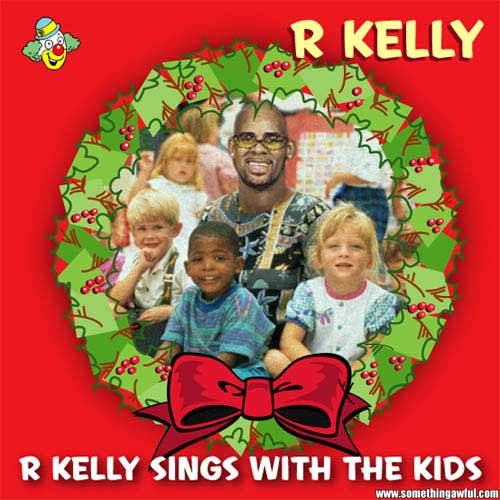