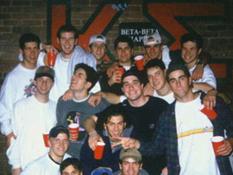 The programming crew for Cunt Rammer poses during an all night "brainstorming session".

New York, NY - Game publishers Simon and Schuster Interactive announced a followup to their poorly selling PC title "Panty Raider", tentatively called, "Cunt Rammer". The sequel will follow the established plotline developed in the original title and expand upon the characters created in that universe.

"It's gonna be, you know, like totally bitchin'," announced Cunt Rammer's Head Developer Jake "Pocket Snake" Harrison in a recent interview while he washed his 1986 Camaro. "We totally learned from our mistakes in Panty Raider, and we're like so ready to totally improve on the kickass franchise we have with this series. It'll be like, totally mind-blowing.

"We think the reason nobody bought Panty Raider was because it just didn't give the hardcore gamers enough of what they wanted, which is (naturally) hot babes. We like went down to the local state college and took a totally informal poll with the dudes at the Kappa Sig house, and they said the only games they play are ones with hot naked models in them. So we said, 'okay, we can like totally do that,' and we held this four kegger and gave away Dave Matthews Band CDs to anybody who could help us think of ideas for a game plot and shit. After the second keg, man, the ideas started flowing."

The original concepts behind Panty Raider ranged from "trying to bang a Kappa Fi chick" to "finding where the hell Pete is so you can score some weed," although investors demanded to go with a more mainstream idea once the dean's daughter filed a complaint against Simon and Schuster's head programmer for "slipping roofies" into her Zima.

"If you ask me, that whole complaint thing was a crock of shit," commented Panty Raider Project Coordinator Nick "The Trasher" Reynolds. "I mean, the chick was totally askin' for it. She had been drinking Zimas all night, and [Head Programmer] Chris comes by and she's like totally all over the guy. So they go upstairs and put on the new Eminem CD, and she's like totally going orgasmic. Me and DJ were smoking up downstairs and are like, 'Oh shit, she's going to totally be walkin' home bowlegged tomorrow.' Then DJ falls off the railing and into the kiddie pool we filled up for our 'Sand and Sun' party last month."

When sales of the much hyped Panty Raider fizzled, Simon and Schuster brought in industry analysts from Mr. Thompson's Economics 209 class, who were asked to study why the game fared so poorly in a market which thrives on sexuality. Craig Buckner, a C+ student who drank half a bottle of tequila at last year's Mardi Gras and vomited all over a Police officer, claims that Panty Raider simply did not give "enough of the good stuff that people wanted."

Preliminary concept art for the box design (censored because this is a wholesome, Christian family site).

"Guys dig tits and sweet asses, you know?" remarked Buckner at a recent press conference held after his fraternity-sponsered "Salute to the Grateful Dead" party. "But Panty Raider was like, 'yeah, we'll have some of that stuff, but we're pussy whipped by the ESRB and we can't put any of the cool stuff into it, like getting head from Liz Hurley. Then the people who play games were like, 'woaaah, totally not cool. This stuff sucks' and they didn't buy it, you know? So, like, for them to be successful, they've got to like deliver the goods, you know? There'd better be some DVDA shit too, if you catch my drift."

"Yeah, we know that we were like fuckin' wussies with the last game," responded Reynolds. "So we're gonna like put tons of that shit into the game. You see, there's these aliens and their spaceship runs on SEX, you know? And the more times you bone these supermodels, the more fuel they end up getting. They want to get back to their home planet of Clitorious, so you gotta do like a shitload of models. You know, really fucking hot ones with big breasts and shit. It'll be fucking great."

Representatives from publisher Simon and Schuster were unavailable for comment, as their secretary claimed they had a "really bad hangover" and were "passed out in the back of Andy's truck."