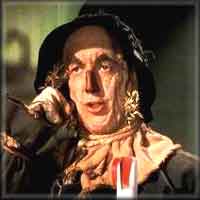 "If I had a brain, I'd think about very dark and disturbing things."

I love television. I want to get that out in the open from the start so that it's perfectly clear that this is article is not an act of hate or anger, but an intervention born out of caring. I love television, but this time, it has gone too far. I was innocently flipping through the channels, certainly not looking for softcore porn of any sort out of a horrible desperation, when a familiar image caught my eye. It was Dorothy, that loveable Kansasian scamp, and her little dog, too. It had been so long since my screen had been graced with their freakishly inhuman Technicolor presence. It seems that the WB network was preparing to show "The Wizard of Oz" in a few days time. Now, there's nothing inherently wrong with that. "The Wizard of Oz" is premium family entertainment. That's the sort of feel-good movie that restores a small portion my faith in humanity after watching something like "The House That Screamed." No, the problem was that the WB, in a move that could only have been the influence of some sort of demonic marketing imp, somehow figured that they could hype up "The Wizard of Oz" as a scary movie. It's a G-rated movie from the Thirties, WB network. You're not fooling anyone. Not for a lack of effort, though. They cut together all of the clips of the Witch and her flying monkeys, and had the whole thing narrated by the guy who does the previews for genuine horror movies and always insists that you have assumptions of safety about unsafe things. I would love to have been in the room for that presentation.

What the surviving executive and the imp were forgetting, though, is that everyone on Earth has already seen "The Wizard of Oz." Starving Nigerian AIDS babies have seen "The Wizard of Oz." These days, children are born having already seen "The Wizard of Oz." It is not a scary movie. It has never been a scary movie. Everyone knows that it is a cutesy, family-friendly movie that serves as a whore for the Technicolor corporation. The scariest thing about it is that it doesn't credit any of the individual Munchkins, but rather gives them a group billing as the "Midget Singers." The only way "The Wizard of Oz" could ever frighten anyone is if a crazed psychopath tore the film out of the tape, used it to bind and gag a family, then bludgeoned the parents to death in front of the children with the empty cassette. Even then, it would have to be a pretty damn scary bludgeoning. Frankly, I'm shocked and appalled by the WB. That's the sort of ratings-grubbing sensationalism that I'd expect from FOX, who brought us "Who Wants To Marry a Millionaire," "When Prostitutes Attack," and "Who Wants To Marry a Millionaire Prostitute, Who Will Then Attack You," but not the Warner Brothers. I suppose I shouldn't be too surprised, though. That sort of overly dramatic advertising is becoming more and more common. It's a simple formula: foreboding music plus crappy fades plus that one narrator equals profit. Most of it is the narrator. That guy's got it made. All he has to do is read his lines like every three words is a complete sentence, and yet never actually complete a thought. I guarantee you, within the next few years, every TV or movie promo will use him. 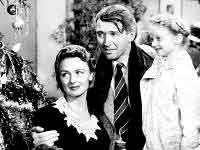 "Oh, Mary! I'm the luckiest guy in the world in a dark and disturbing way." 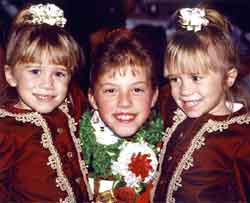 Stephanie:"I've got stupid on either side of me!" Olsen Twins:"We've got ugly in the middle!"

(Black screen. Foreboding music plays.)
Narrator: "Just when you thought it was safe to break a lamp..."
(Black and white shot of the broken pieces of a lamp on the floor. A baseball slowly rolls through the pieces. Fade to black.)
Narrator: "In a time of innocence lost..."
(Close-up of Michelle gasping.)
Narrator: "One girl, who is played by two girls, will find herself the target of an investigation..."
(Danny stands over the broken lamp, his hands on his hips.)
Danny: "Michelle, did you break this lamp?"
(Fade to black.)
Narrator: "She will enter a world of lies..."
(Shot of Michelle waving her arms in desperation, and also because she's like three years old.)
Michelle: "No! It was Stephanie!"
(Shot of Stephanie waving her arms in desperation because she sucked. Seriously, am I right, or what?)
Stephanie: "What?"
(Fade to black.)
Narrator: "Her friends and family will turn against her..."
(Stephanie puts her hands on her hips, glaring at Michelle.)
Stephanie: "How rude!"
(Shot of Aaron with his thumb on his nose, waving his fingers at Michelle. I was never really sure what that was all about. The point is, I hate Aaron. Come one, you remember Aaron. The little brat who was always insulting everybody but never got his comeuppance? I wanted to smack him something fierce. This isn't really stage direction. I'm just venting, here. God, I hate that kid. I think he grew up to be Haley Joel Osment or that kid who played Darth Vader in "Episode 1." I don't know, one of those punks.)
Aaron: "You're stupid, dumb-dumb!"
(Fade to black.)
Narrator: "She will learn a lesson that she will never forget..."
(Danny kneels in front of Michelle, his hand on her shoulder.)
Danny: "You have to learn to take responsibility."
(Fade to black.)
Narrator: "A terrifying new part of growing up..."
(Same as previous shot.)
Danny: "It's part of growing up."
(Fade to black.)
Narrator: "The crime comes full circle on the next episode of..."
(The title graphic fades onto the screen.)
Narrator: "Full House..."
(Fade to black.)

There's No State Like State Og. Not Even Missouri.

We've just received the latest word from the kitten-loving megacorporation State Og, and I for one couldn't be happier, or so this prepared statement that I'm writing out of my own free will and not at all at gunpoint would have me believe. This week there's more Og news than you could shake a stick at, unless it was one of State Og's trademarked Super Sticks. Those things can do anything.

Today marks a great accomplishment for one of State Og’s finest! News has just reached us that Bob Nigel, an employee from Intercourse, Pennsylvania, crushed the overwhelming odds and became the first man in history to survive the State Og Acid Challenge. The test consists of one simple trial; the challenger must endure seven gallons of deadly acid poured over his naked flesh. Since Mr. Nigel did not choose to undergo the Acid Challenge on his own accord, but was in fact forced outside into the Og Acid Rain by his fellow coworkers, State Og must waiver the monetary element of his reward. However, we are quite certain Mr. Nigel will enjoy his State Og beer hat and Acid Challenge trophy just the same!

The mischievous coworkers who locked Mr. Nigel out of the building during the acid storm report that they “knew Bob always had it in him,” and though Bob was running about and screaming “my flesh, burning, oh God, help,” they were certain he was going to tough it out until the end.

Ha ha! That's what the chip they implanted in my brain forces me to love about State Og. They're always bringing out the best in their fellow man, usually with acid. But there's far more than just painful scaldings in the latest update from our cherished State Og representative. See for yourself! Act natural as you do so. They can see you at all times, and they know what you -- oh crap, they're on to me!