As part of our ongoing parole requirements (remember kids: Pepsi vending machines may look cool, but it certainly isn't "hip" to attempt mating with them), we here at Something Awful are legally required to perform a certain number of community service updates each month. For example, last month we listed the names and addresses of 50 released sex offenders, many of which turned out to be Kinko's Copies employees thanks to a slight confusion with list titles. Regardless, we're here this month to alert you, the public, to some of the more dangerous products you may have received for Christmas this year. Many companies are offering factory recalls of their most popular-selling items, as their haste to be on market shelves resulted in an irresponsible quality assurance check. To prevent further members of the public from injuring themselves on defective or deadly objects this season, please read through the following list and contact your state government for information regarding their return if you received them this Christmas. 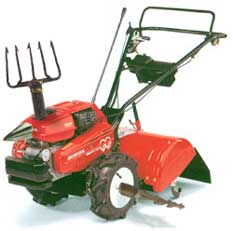 The RonCo Roto-Revenger may additionally pose a slight choking threat.

The RonCo Garden Terror Kit (Roto-Revenger) - Studies have shown that the Roto-Revenger, which are used to render and tear through the spinal cords of godless groundhogs and moles, may accidentally burrow too deep and slice through gas or electricity lines. In the case that you do rupture one of these, please immediately convulse and / or explode. Additionally, the RonCo Roto-Revenger Rake attachment may, under extreme circumstances such as "being turned on," detach itself from the Roto-Revenger and become airborne, able to pierce through a nine-foot thick steel wall. Additionally, the label on the Roto-Revenger, which reads "SHOULD NOT BE USED BY CHILDREN UNDER 3" is a misprint and should display "SHOULD NOT BE USED."

Gyurai's Super X-Soldier Combat Supers - These Japanese action figures have used an advertising campaign which promoted their ability to cause the background behind the user to change into a series of colorful, fast moving vertical lines whenever they're engaging another Super X-Soldier Combat Super in combat. Gyurai Inc. has been unable to predictably reproduce these lines in clinical tests outside of their secret laboratory, and when they were actually successful, it resulted in a mass seizure that caused the head of the participant to cave in like victims of those evil masks from "Halloween 3: Season of the Witch." If you do see the frantic vertical lines flying behind you at a highly alarming rate, please notify the proper authorities while your head begins to crumble and leak down your torso.

The Igia Acne Assault Spray - Originally designed to fight acne "the natural way," some Igia Acne Assault Spray Tubes have accidentally had their "natural ingredients of glycerine, tea tree oil and witch hazel" replaced with "hydrochloric acid used to disintegrate decommissioned US Marine carrier ships." This is the result of a USPS mixup in which two large cargo boxes, one labeled "ACNE GEL" and the other "DANGER - DANGEROUS - DEADLY - DO NOT TOUCH - HAZARDOUS TO ALL LIFE FORMS - BEWARE - STAY AWAY" were switched in a Seattle port loading bay. The illegal Mexican immigrant in charge of this has been either fired or at least demoted. If you are given an Igia Acne Assault Spray gift, please report it to the local bomb squad.

Heckler and Koch .44 USP Special Edition Semi-Automatic Handgun - Ballistic tests have shown that this handgun, when used by curious children who discover it in their parent's sock drawer, has a very low chance of accidentally going off and killing them or their equally curious friends. Any person who has purchased a Heckler and Koch .44 USP Special Edition Semi-Automatic Handgun may return it to the dealer in exchange for the brand new Heckler and Koch .45 USP Assault Model, which shoots explosive anti-children bullets designed specifically for home accidents. If you return your handgun now, you will also receive a free storage case which has a defective lock and reads "FREE CHOCOLATE INSIDE!!!" in large, festive letters.

UPDATE: We have been told by Elektra that these CDs are, in fact, not recalls and are the actual discs. 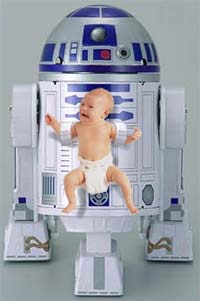 Lucasfilm LTD "Talk N' Stalk" R2D2 - While the majority of Lucasfilm's "Talk N' Stalk" R2D2s are excellent toys which produce irritating beeping sounds and run into walls with the utmost of joy, some R2D2 models using an older OS are prone to violent outbursts which could possibly injure the operator. In addition, the Lifetime Movie Network brand "Talk N' Stalk" R2D2 has an unfortunate programming glitch allowing the robot to kidnap your child, move into some filthy motel in another state, and then drink heavily until you hunt him down and bring justice to the metallic menace by causing him to fall off a cliff. Keep in mind that if you purchased the Lifetime Movie Network brand robot, no man will have even the slightest interest in helping you track down your missing child. The male-dominated police force will laugh at you, the legal system will claim their "hands are tied," and your ex-husband's parents will probably try to sue you for something.

I hope everybody had a safe and happy Christmas this year, and if you didn't, hell, it's probably your own damn fault.

"Nocturnal Illusion" is a "Look and Think" Hentai game. If you don't already know what that means, let me ruin your innocence. You start in a room. You must "Look" at the room. Then, you must "Check" every single piece of furniture inside the room. Twice, in quite a few cases. Then you sometimes get hit with the "Think" option, which prompts the character to fall into a long soliloquy about the room's furniture and stuff in general. After you've finished this process you can "Move" to another location and start over! But the real kicker comes when you have to go back to all the places you've already visited to "Look" and "Check" everything yet another time just to trigger some totally random event. I mean, if you didn't know that taking a third look at the toilet seat would suddenly cause a new character to appear in the motherfucking garden, then it's obviously YOUR FAULT.