There's something I need to tell you, sweetie. Remember the other day in the supermarket, when I showed you a flier that read "Start Your New Year Right With 15 Turkey Recipes"?

Your eyes grew large with concern and you immediately told me to put it back, but I didn't. I walked over to the stack and pretended to place it on top of the others, but I was only folding it up into a paper football. That's why I was carrying a football for the rest of the shopping trip. It wasn't even real, it was that advertisement.

How I wish the deception ended there, but unfortunately there's more. 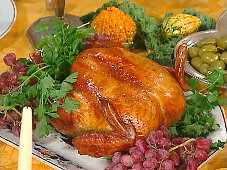 When you were putting the groceries away, I slipped away, locking myself in my study and carefully flattening the flier out across my desk. For sixteen hours I examined that document from every angle under the light of a solitary desk lamp. I leaned in with a magnifying glass at one point, then, scowling at the folly of using such a tool, made another attempt with an electron microscope.

The following morning I emerged, having gleaned all that I could from that list of recipes. My mind was set.

Without a moment of sleep, a shower, or a simple change of clothes I drove down to the office and asked to meet with Mr. Billens.

I had never met the man before. He was, after all, the president of the branch. The buffer zone between us was inhabited by at least three bosses, maybe as many as five. Still, he proved to be a kind man, as he agreed to set aside some time for someone as low on the food chain as me on short notice.

Feeling more than a little intimidated, I sidestepped his attempt at small talk and awkwardly launched right into the matter. I told him about the fifteen turkey recipes. Without going into too much depth, I described each, savory dish closing my eyes to recall their order.

I explained how these fifteen turkey recipes would allow me to start the new year right, and how rare this opportunity was, as we have far fewer new years to experience than we assumed we would in our childhood.

After a deep breath, I told him that dividing my attention between my job and the turkey plan would be fair to neither. There are, after all, only so many hours in the day, and a man only has so much passion in his heart.

With great sorrow, I resigned from my position at the company.

The room was painfully silent. Mr. Billens regarded me with a slight frown, his bushy eyebrows arched. With a small, slow nod, he reached out to a picture frame on his desk and turned it to face me.

Inside was a perfectly preserved clipping from a newspaper printed in the 1960s. Across the top, in bold print, was the line, "Lighten Up Your Life With These Jell-O Ideas!" The frame was weathered as if held tightly thousands of times over the years, the glass fogged by countless dried tears.

"I thought I could do it all," said Mr. Billens, in no more than a whisper. "Back then nothing seemed out of reach. My burgeoning career, a handful of delightful recipes. What small challenges these seemed to a young man with more enthusiasm than perspective."

The old man approached the window, hands clasped behind his back, lost in thought as the parking lot and world stretched out before him.

"It wasn't so bad at first. One recipe, one late day at work. Then came the second dish, and my work suffered for it. Soon I was using up my holiday time. Eventually I had to make a choice."

He turned, sweeping one arm, indicating the office.

"Not a day goes by where I don't wonder what could have been. Please, see this turkey business through to the end! Live the dream. Give it everything you've got, while you still can."

These past few nights have been difficult. Between sneaking down to the basement to work on my secret turkey lab and fretting over how to tell you about all of this, I've had very little sleep.

What I'm trying to say is, if I have any chance of making my turkey dreams a reality we need to divorce. Take the kids to your mom's house. Don't look back, and don't weep for me. I'll be fine. Better than fine, I'll be starting the new year right.