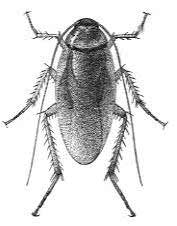 Filed somewhere under conventional wisdom is the knowledge that sooner or later mankind is going to do something irreparably harmful to itself. The exact nature of this fatal act remains a mystery, and likely will remain as such until it is too late to prevent. There are many theories about how we will all die and what will happen afterwards, though only two withstand scientific scrutiny. One of these theories is that, upon mankind's demise, insects will inherit the earth. Cockroaches, for example, are really adept at surviving, and would make likely candidates for the role of Future Rulers of Earth. This insect supremacy theory, however, is often ignored for its lack of imagination, especially when compared to the more colorful ideas about the post-apocalypse.

The prevailing theory is that our own machines will eventually overtake us, slowly marginalizing mankind until it is all but extinct and the machines alone rule the planet. There, in that horrifying world of endless smokestacks and rusty horrors, factory wombs will spill out yet more robots on assembly line birth canals. Slowly but surely they will conquer outer space, building mirror replicas of their dead home world on thousands of other planets. President Eisenhower graphically warned us of this future when he gave his farewell speech to the nation.

I tend to disagree with President Eisenhower and the scientific community's gloomy warnings of a mechanical apocalypse. My own belief is that mankind will end with a whimper. As technology and a desire for police procedural stories escalates, humankind will be increasingly resigned to watching Law & Order and CSI shows in lieu of actually living. I predict that humanity will eventually die by replacing itself with a nearly infinite supply of gritty crime dramas. These shows, beamed through the air and space from satellites and broadcasting towers, will expand through the galaxy, and eventually even overtake the universe itself. What happens then is for philosophers to debate. Perhaps these signals will then travel back through time, eventually finding a primitive world called Earth, teaching the primitive beings there about something called "the Criminal Justice System." The possibilities are myriad.

My own theory aside, the world really revolves around the two theories that have been dominant since the Industrial Revolution: the all-machine future, and the all-insect future. It appears, now, that these two futures are intersecting. The future will belong to the insect machines. What happens then, I can only imagine, will be rather gross. It is worth mentioning that those who cling to religion have long held that in the future, insects and machines will live in harmony with mankind. They are of course silly to think such things. While insects may well have immortal souls, it is obvious that humans and robots do not. 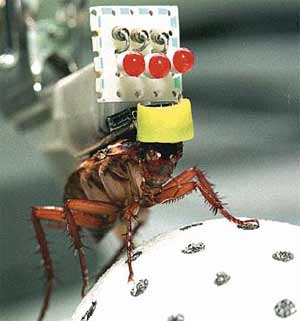 The reason that the insect and machine timelines have merged is because of one startling recent invention: the cyborg cockroach, or Robo-roach. Obviously mankind bears responsibility for creating such a stupid thing. Those keeping score at home will note that, as the cyborg cockroach is manmade, it therefore meets the criteria of being a probable cause of the end of all human life as we know it. A round of applause for science, if you will!

The Robo-roach is essentially an ordinary cockroach that has been stripped of its wings and antennae. A big old block of robot is then strapped to its back, complete with cameras and various gadgets. The robot part receives instructions from humans (for now) and stimulates what is left of the cockroach to respond to them (for now). The practical applications of such a thing are somewhat clear when you consider the types of places an insect can navigate. It also opens up the possibility of insect espionage: sending a covert robot cockroach into a cockroach nest to stir up dissent and stage a coup, or possibly just carry out sabotage. Benefits aside, we cannot forget that this also opens up areas of contention.

This hideous half-creature represents a step back for robots, and a step forward for insects. It also represents the dawn of corruption in the realm of professional flea circuses, as now those tiny athletes may well be guided by superior minds rather than there own skill. More important is the fact that robots have, as of late, gained a reputation for cleanliness. The Roomba is a robotic vacuum that roams your home, cleaning your floors and essentially saving you a lot of time. Thus far the Roomba has obeyed the Three Laws of Robotics without incident, and found its place amongst man. However, let us not forget that insects and cleanliness are natural enemies. The idea of creating unclean robotic-insects to undermine the actions of the hygiene-oriented Roomba is the first step in robot class warfare, and a surefire ticket to Apocalypse Town, USA.

I have my doubts about the practicality of such actions overall. I applaud science for continuing to undermine nature, as I generally think that's a very neat thing to do. But I have to wonder if these insect machines will ever reach the efficiency of a pure insect or a pure robot. If you could make a tiny robot car the size of a cockroach, what good is a robot cockroach? More importantly, how long before these creations evolve beyond our control? Robots are sworn to do no harm to man and obey his every whim. Insects have taken a vow to annoy and vex us. These two conflicting ideologies, once combined, are likely to create all manner of chaos. Now that Pandora's Beehive has been opened, all bets are off.

Could humanity be wiped clean from the world by hideous cyborg insects? Could robotic ants work endlessly mining the earth for all its resources while cyborg mosquitoes and bees and wasps carry out raids against human survivors? Will these aerial insects of doom sting our valiant resistance fighters with nano-viruses or implant parasites beneath their skin? Could we have just combined our two greatest end time scenarios? Is the future world of machines now no different than the future world of the insects? By the time we figure these mysterious out it will be too late.

For a listing of fourteen additional uses for the standard issue recreational Frisbee (for example: a dinner plate) please click here with one or more of your mouse buttons.