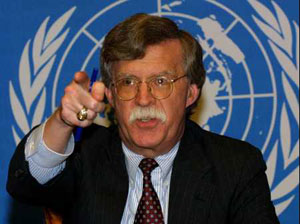 The power is yours!For the last two decades, Americans have been captivated by John Bolton's heroic struggle to be named United States Ambassador to the United Nations. Though his heart longs for the chance to shake spines and crack skulls at the UN, the nefarious Democrat party blocks him at every turn. Critics call John Bolton unfit for the job and are fighting to keep him as far away from the position as possible for fear he will use the position to destroy all mankind. Logically, you would think the Bush Administration would just find somebody less controversial to nominate, but apparently there is a real shortage of competent Americans for them to pick from. I would think this would single a need to put lots of money into education and breed a new generation of competent Americans, but then I'm very stupid.

I'm very stupid, and probably a little biased in favor of disliking anybody in government. I think Democrats and Republicans stink equally, and would love to see some crazy socialist nutcases take over and make us all drive the same brand of car and give trophies to welfare moms and spray paint and megaphones to their untamed children. I favor this because I'm a spiteful jerk. The point I'm getting at is that I generally don't care for most elected officials because I think they just ramble on and act like idiots instead of getting actual, decent work done. And when they do do things, it's usually to let business get bigger or appoint more idiots to positions of power. We've wasted how many months on John Bolton?

Just give up on the guy and get somebody who isn't going to piss people off. The White House stands by the whole "we want John Bolton to bust some fucking heads and clean up the UN like Mayor Mike Haggar cleaned up Metro City" line of reasoning, but why? It isn't America's job to reform the UN, especially if it doesn't like the UN. Extra especially if America needs reforms itself. I know the current thinking is that we know what's best for the world, but I'd rather we had people to dog us constantly and to play Devil's Advocate even when they agree. The U.S. media doesn't really do that, so I'd at least like the rest of the world to volunteer and help us out that way. Having people question the ever-loving fuck out of you means you actually have to have solid arguments for things, and that's A-OKAY in my book. Sure that's more rhetoric, but in some instances I'd rather have us talking about blowing up countries instead of actually blowing up countries. The rest of the world owes us this favor after we saved them in WWII and for all those reruns of "Baywatch" we shipped overseas.

But since Bolton is destined to get the job anyway, we might as well get to know him a little better! So here's looking at you, John Bolton!

John Bolton was grown as part of a top secret and highly advanced eugenics program along with actor Wilford Brimley. Members of this highly cantankerous batch can be identified by their distinctive mustaches and a barcode printed on their inner thighs.

Complaining about the impotence of the UN, Bolton stated, "The Secretariat building in New York has 38 stories. If it lost ten stories, it wouldn't make a bit of difference." He then flew a plane into the top ten stories, knocking it down to 28 stories to prove his point.

Bolton has been described as a "kiss-up, kick-down sort of guy" and "tender, but not huggable" by high ranking State Department officials.

Raven Software based the "Soldier of Fortune" game franchise off the life of John Bolton. In these games you play as Bolton on a world tour as a mercenary for hire.

In 2001, John Bolton condemned the Court of Camelot for concealing a WMD known as Excalibur. He later revealed that he was just getting "in the zone" for an upcoming renaissance fair.

Bolton once proclaimed, "There is no such thing as the United Nations. There is only the international community, which can only be led by the only remaining superpower, which is the United States." What he meant to say to the rest of the world was, "neener neener neener!" 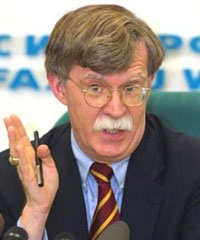 On day one of the Senate Confirmation Hearing, John Bolton made everybody cry and then threw mud at a girl.

Experts warn that John Bolton's head is being consumed by hair, forecasting that by 2020, his mustache and hair might overtake his entire body. At this point a haircut would be all but inevitable.

Former Senator Jesse Helms called Bolton, "the kind of man with whom I would want to stand at the gates of Armageddon." Proof once again that Americans love leaders ready and willing to lead them into THE APOCALYPSE.

I realize some people might not care, but is it really a good idea to put people in high power that cause such derision? At some point don't you stop and think, "Oh fiddlesticks, most people seem to hate this guy! Maybe we better come up with someone else?" What happened to that kind of thinking? I suppose it probably never existed.

Today's article was brought to you by the Daily Dirt, the number "4," and a shadowy transnational corporation bent on pumping raw sewage into the upper atmosphere.