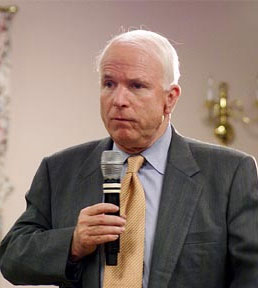 The Vietcong were cruel and relentless, sparing John McCain no indignity. When they trained him to salivate at the sound of a bell, he snuck out of his cage at night and disabled all their bells, lest he risk dehydration from excessive salivation, a fate that had doomed many POWs.

They took to putting sand in his underwear every day, which caused a lot of chaffing and made it difficult for John to move around. Eventually he developed an immunity to sand. There's a lot of folks saying McCain is too old and that he is in failing health, I believe. But doctors say it is impossible to kill John McCain with sand. Literally impossible. That's no small potato if you ask me.

When the Vietcong hacked off John McCain's hands and then reattached them to the wrong arms, he learned to be ambidextrous. When that didn't help due to the fact his hands were backwards, he learned to whistle with perfect pitch and moved his captors to tears with soulful ballads. By the time they put his hands back on the proper arms, he had already adapted, learning instead to walk on his feet. John McCain knew his hands were an unneeded luxury. Today he seldom ever uses them except to deliver a thumbs up to America.

For 300 horrifying years, the Vietcong artificially prolonged John McCain's life until everyone he knew and loved was dead. John McCain never gave up and used his unwavering commitment to America and the sun's gravity to slingshot back in time so that he could serve out the remainder of his captivity.

The Vietcong realized they were powerless against John McCain. Here was a man who would not betray his country no matter how badly they tortured him. So, knowing that they could not win, they released him. But even this was part of a clever ploy, for they released him into an elaborate virtual reality simulation of real life, where virtual reality replicas of his friends asked him to give up vital American intelligence. John McCain resisted. Realizing the ruse, he punched through an invisible wall and emerged inside a high-tech Vietcong control room, shocking his captors and catching them off guard.

To this very day his Vietnamese tormentors still try to recapture him, to put him back in that prison - the Hanoi Hilton - but John McCain fights them off at every turn. He eludes their crafty traps, dodges their poison-tipped darts, and has learned to walk silently and leave no trail. For decades he has lived on the run, honing his body into the ultimate weapon.

Folks, I know that being a POW doesn't make you qualified to be president. For one thing, no prisoner should ever serve as the leader of the free world. It sets a bad example. But being an ex-POW, especially one as bold and determined as John McCain, sure does make you qualified. Come November, we have a choice. We can choose a man with little experience, or a man who survived the kind of experience that would break any sane man.

For me, the choice is clear.


Special thanks to Abraham, Street Cactus, and BAN ME PLEASE for essential, red-blooded input.