Shocking Revelations of the Wikipedia Scanner 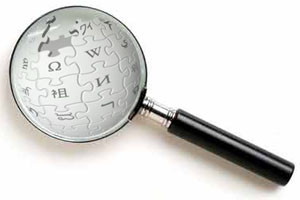 The internet world was rocked this weekend when a new program, Wikipedia Scanner, confirmed that corporations habitually edit their own Wikipedia entries to whitewash criticism and add their PR spin. Worse yet, governmental organizations have been caught tampering with the entries for various political figures and subjects. These revelations come as a great blow to Wikipedia, who has seen its utopian purpose thwarted by the sleazy hands of capitalism and propaganda.

Initial reports revealed that Microsoft had tampered with information regarding the failure rate of the Xbox 360; WalMart had put a happy spin on their low wages; the FBI had removed photos of Guantanamo Bay, and the Vatican had removed controversial articles about Sinn Fein leader Gerry Adams.

These early reports only scratch the surface of this incredibly deep, broad, tall, stout and husky issue. Through extensive use of Wikipedia Scanner, Something Awful can exclusively reveal the following shocking bombshells:

Soft-rock superstars America substantially modified the entry about their 1972 hit A Horse with No Name, claiming that the track was written and performed by Neil Young.

Singer Geddy Lee painstakingly edited the entry for his band Rush, modifying over seven hundred references to his unusually high voice. A typical edit changed the text "Lee is known for his unusually high voice" to "Some people say Geddy Lee has an unusually high voice, but scientifically, if you look at it with waves and spectrums and stuff, his voice is really pretty average and not especially high, it's much more of an average male masculine voice. Lots of people are jealous of his voice because it has good tone, and those people try to deride Geddy Lee by saying his voice is really high, but actually it's a pretty normal voice, and he's not sensitive about his voice but he often has to correct people when they say it's high, because it's not, and anybody who has heard his speaking voice will tell you that it's pretty normal, not too high, not too low."

Reports indicate that Dracula regularly scoured his own Wikipedia page, removing any information that might indicate he was fictional.

The Danish Parliament, in an apparent practical joke, entirely swapped the full text of the entries for Norway and Sweden. After two years, this change has yet to be reverted.

Author Joseph Heller painstakingly removed all nouns and modifiers from the entry about his book Catch-22, and then signed the entry "Irving Washington." He also appended the entry to indicate that he is still alive, although he is not.

The Republican National Committee removed twelve paragraphs of well-cited evidence that Mitt Romney is a cannibal, replacing it with the lyrics to John Cougar Mellencamp's 1986 hit Heartland Eagle.

American hate group Society for Aryan Dominance peppered the biography of George Washington Carver with subtle implications that he was a white man in disguise.

Nintendo removed links to articles detailing a July, 2007 incident in which an unsecured Wii remote was thrown clean through a baby.

Sources within World Wrestling Entertainment, Inc. modified the entry about deceased wrestler Chris Benoit, claiming that his homicidal rampage was not a result of steroid use but of addiction to the fictional street drug "Nuke," featured prominently in the plot of Robocop II.

The CIA made numerous edits to the entry about Dracula, each time adding copious evidence to indicate that he is a fictional character.

Pellegrino bottling process is known as the toenail shit water. Ten million bottles of shit water produce every year from Pellegrino, and many get sick and die. Most water come from the toilets of the retard.

Water is then mixed from the rusty hose, then the water is filtered through the armpit of the prostitute and into the mouth of old man, and old man he spit the water into face of granny, mix with the dribble of granny then spit into jar of the rotten teeth, where it sit for several months to fester and they add fresh worms every week.

They bring the water then to Satan, who does the reverse blessing on the water, making it so anyone who drink of the water is condemned to the hell. Green bottles for the water is then crafted from the bones of the Nazis who are hang for war crimes. Pellegrino is voted #1 drink of the pedophile shithead.